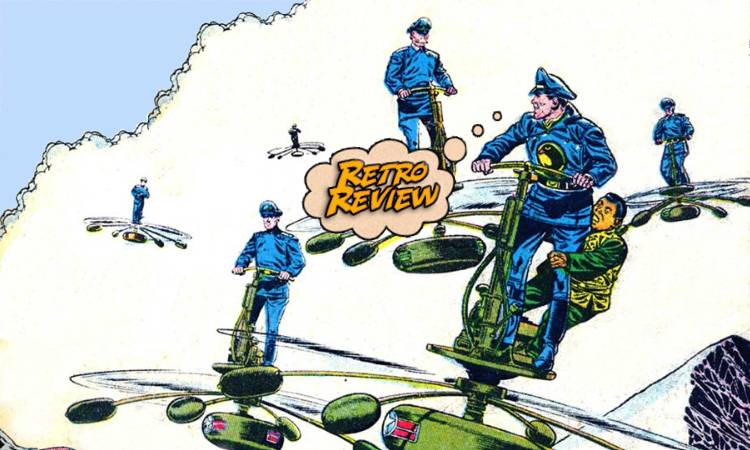 The casual fan may only know Quality Comics for Plastic Man, or perhaps the Freedom Fighters. But one group of characters not only served as Quality’s foundation, but they also outlasted their publisher… by  decades! Your Major Spoilers Retro Review of Blackhawk #107 awaits! Previously in Blackhawk: Founded in 1937, Quality Comics was founded to publish reprints of comic strips in booklet form to the awaiting public. By 1939, though, Everett “Busy” Arnold had partnered with Eisner and Iger, a company that specialized in creating comics on demand for publishing by other companies. (And yes, that’s Will Eisner, the creator of The Spirit, lending his name to the enterprise.) The 1940s gave us a virtual army of costumed comic superheroes from Quality, but their output throughout the next ten years was varied, including romance, western, and war titles. The most successful of those books were G.I. Combat, which debuted in 1952, and the character who straddled the line between war comic and superhero comic: Blackhawk! With his international squadron of ace pilots, the mysterious Blackhawk was a success for Quality, taking over Uncle Sam’s book after the demise of Military Comics, their first home. They were adapted for radio, made into a movie serial starring former Superman Kirk Alyn, and shown to help win the war against the Axis powers. By 1956, they were working with the nations that would become NATO to help stave off possible Communist attacks around the globe. Unfortunately, this puts them in the sights of spies who want to steal the Allied secrets for their own gain! When their hotel room is robbed, it looks as though our ace fliers kept the bad guys at bay, but in truth, their spare flying uniforms were stolen! Having stolen the newfangled aerocycles, the Communist agents think they’re in the clear, but the genuine Blackhawks aren’t going to give up that easily. If you’re like me, you remember the ‘Hawks in their Grumman XF5F Skyrockets, but by ’56, those planes are waaaay past cutting edge, replaced with Lockheed XF-90 prototypes. It’s to the credit of Dillin (who is probably best known for his long stint drawing Justice League for DC) and Cuidera (who is known for, uhh… Blackhawk) that I could tell that just from these panels. Their layouts are also crystal-clear throughout the issue, a reminder that, in the old days, multi-year runs on books were not only possible, but created amazing collaborations. After shooting down a squadron of enemy MIGs, the Blackhawks catch up with their doubles to engage in the OTHER thing Blackhawk and his men excel at. Blackhawk Squadron manages to reclaim the experimental aerocycles, taking to the air to return to non-Communist airspace, only to come face-to-face with a horde of Russian tanks. The extremely maneuverable air vehicles give them the upper hand against their foes, with Blackhawk and Chop-Chop directly attacking the enemy armored column. This issue also features some reprint material, a short tale wherein Blackhawk breaks a secret Communist fifth column within the French Foreign Legion, a story wherein the team has to keep a hydrogen bomb out of the hands of Communists in an unnamed Asian country, and a full-page recap of the team’s origins from 1941. That unnamed “far Eastern government” which may be Kampuchea/Cambodia does bring up the elephant in the room when it comes to Blackhawk: Yes, despite my careful choice of images and slight edits, Chop-Chop does appear in this issue in his full racist-clown-era infamy. It’s a little hard to read certain parts of this issue, but at least other Asians aren’t as grotesquely stereotyped in these pages. (They’re still bright orange, though.) This issue proved to be the final Blackhawk issue published under the Quality Comics banner, as Quality ceased publishing in December of 1956. The loss of interest in superhero comic books hurt their bottom line, but ’56 was also the year that the American News Company was sanctioned by the Department of Justice and forced to give up their newsstand business, which suddenly and severely limited distribution options to US newsstands. Whatever the reason, Arnold sold Quality outright to National Periodical Publications, which seamlessly continued publication of Blackhawk, G.I. Combat, Heart Throbs, and Robin Hood Tales under their DC banner.

The Blackhawks soldiered on, becoming less and less relevant in the Vietnam era, finally facing cancellation in 1968, but the brave pilot and his men are still part of the DC Universe today. As for Blackhawk #107, there’s no real indication in these pages that an era is ending (and since Bernstein, Dillin, and Cuidera carry over to DC’s presentation of the series, you could argue that it’s not an ending at all) but it’s nonetheless a comic issue of historical interest, worthy of 3.5 out of 5 stars overall.