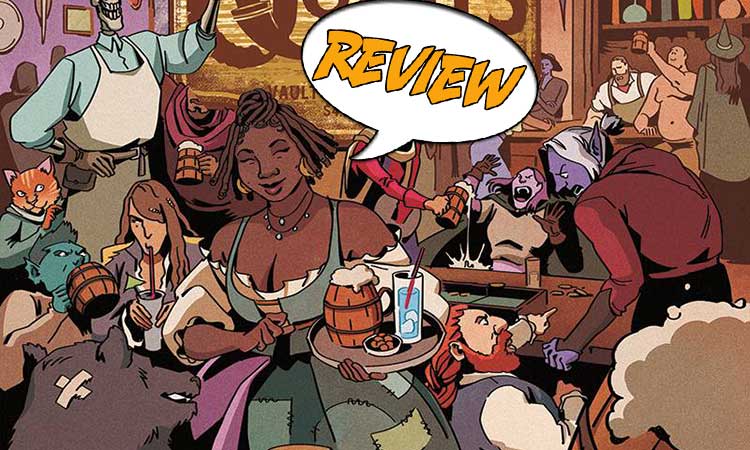 Is life ever normal for Barrow and his crew? Ray quits – again – and will he leave to work with a necromancer? What is Jodan up to? Can Barrow keep his bar in business? Find out in Quests Aside #3 from Vault Comics!

Previously in Quests Aside: Barrow is still wondering how to keep his tavern, his post-adventuring dream, running if the King wants to buy his business. A group of adventurers stop by, sharing stories and trying to talk Barrow out of retirement. Mira has figured out that the King is trying to force him out and brings over some supplies for him. Zuzanna is having problems with Ray. A group of people Barrow invited over arrives for the initial meeting of Adventurers Anonymous. Barrow shares his own story and wonders, was opening a bar the biggest mistake he ever made?

In Quests Aside #3, the story does not advance in a linear fashion. We see vignettes of life at the tavern which is a clever way to fill us in intermittently with background. What’s fun is that as the story progresses, bits of that information do relate to the main story. It is a creative device to use.

This issue opens with a brawl which ends when Barrow has had enough and grabs the combatants and tosses them out the door. One of the young men involved. Tavin, catches his eye and Barrow invites him back the next day for training. Tavin runs out. The scene shifts, and Barrow is talking with Mira. She worries he is projecting a bit of his own younger self on this young man. They also talk about his issue with the King. Barrow wrote to him, telling him he was unjust. Mira points out that powerful people do not particularly like being called out on their mistakes, especially by old friends. She also asks if he has told anyone else.

Zuzanna is preoccupied with Ray. Jodan interrupts her to ask if he can take the night off. She is distracted but agrees. Then, against the backdrop of someone looking for some people to fulfill a side quest, she tells Ray she thinks they should see other people. Ray’s jaw drops. He cannot believe this. His world has crashed around him. As he runs off, Zuzanna has a flashback to her first day on the job, the day she met Ray.

Time passes. Barrow and Tavin have a training montage. Then one day a necromancer arrives, Harukos the Renewer. He demands their finest food and drink and is greatly surprised when his retinue of undead cannot enter. Ray chooses this moment to quit – again – and says it is because these undead cannot come in and he himself is only a token undead. The necromancer invites Ray to sit with him and asks if he has any other job prospects. Harukos would be glad to hire him. Ray agrees; Harukos tries to bind him to his will and his spell fails. Ray was Jodan’s first attempt at reanimating anything, and the spell did not work quite right. Outraged, Harukos storms out. Ray realizes that he has freedom of choice, but he also realizes that he understands Zuzanna as well.

Later, a group of thugs rides up and attacks the tavern. Barrow and his staff work to hold them off, right up until the point where they set fire to the building. Then they have to put out the fire, and Barrow must stop Tavin from simply killing people. But who sent the attackers?

EVERYTHING CHANGES OVER TIME

The art of Quests Aside #3 is a lot of fun. Barrow and Tavin meet after the fight as Zuzanna heals the younger man. Worried that he is going to have to pay for this, Tavin is cross and on the defensive. Still, he stands up to Barrow. And when Barrow says he wants to train him, we see Tavin’s mixed feelings. He knows he is a good fighter. What could he possibly still need to learn? But he is also curious, although he does not want to let on that he is.

The scene where Zuzanna drops her bombshell on Ray is pivotal in this story. It is also poignant and funny, thanks to the art. When I mentioned that his jaw drops, it does. It does not fall all the way off – this book is not that slapstick. It is exaggerated enough to be funny. Ray also wears a pair of tiny little spectacles that give us a sense of where his eyes would be. His eyeholes turn progressively sadder and disbelieving. When he runs off, we see how shocked Zuzanna is at his reaction, and we feel for him as well. So much is set up emotionally, and it pays off brilliantly in Ray’s encounter with Harukos.

BOTTOM LINE: FANTASY SLICE OF LIFE AT ITS BEST

If the structure has a loose feeling on first read, do not let Quests Aside #3 fool you. The story is deftly woven throughout the book and is balanced by some wonderful character development. The staff are a bunch of schmucks, and we cannot help but love them all.