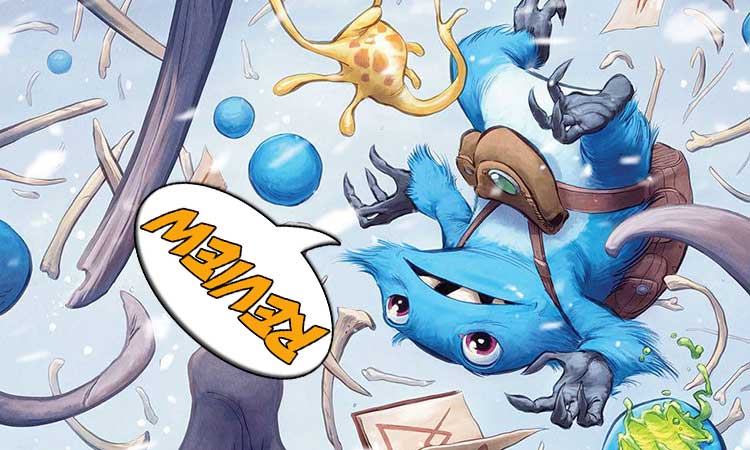 Twig’s new job has turned into a major quest. He and Splat search for three rare items. What sort of challenges will they meet along the way? Find out in Twig #3 from Image Comics!

Previously in Twig: Young Twig is on a quest, but the person who was supposed to tell him what it was is dead. Twig and Splat decide to use the Pathsayer’s device themselves. Twig does get a vision from this, but the machine will not shut off. Splat gets his attention just before it explodes. The gem that held the vision is dark. Twig remembers something his father told him about recharging magical devices. They must find the Nektarmancer. After a travel montage, they do. But he cannot fix the gem. It is too bad; with this gem, they may have been able to save the world. Twig decides he must try to restore the gem, and the Nektarmancer gives him a guide to three items he will need to find.

Twig #3 opens on a scene of woodland creatures defending a castle. They anxiously await the attack that soon comes – a trio of fireballs that weave through the trees and hit the castle, exploding on impact. Then several other creatures move in. Towering over them all is a large, dark creature with glowing red eyes, wearing a crown. It tells Twig to wake up.

This is a nightmare he has been having lately, a vision of the end. Twig and Splat must hurry to find the items he needs. Along the way, they find a melon tree. Twig is eager to gather some fruit, and Splat spots that this is a trap just a little too late. Splat can ooze out of the net, but none of the blades they have can cut through the fiber. Splat disguises himself as a melon and Twig waits for the owner of the trap to get him.

His captor is yet another strange creature who is a hunter. He knows Twig is a Placeling. He also knows that if Twig does not finish his journey, it will be the end of all things. On the other hand, he is rare and worth a lot of money. It is at this point that Splat sneaks in and drops a torch on the hunter’s stack of hides. Everything goes up in flames. Splat frees Twig and they run for it.

This little side trek takes them off course, but they are on track enough to reach the Western Plains where Twig needs to collect the heart of a Horned Beast. Unfortunately, when they get there, all they find are heaps of skeletons of the Beasts who have been hunted to death. Twig is almost relieved. He wants to mend the gemstone and save the world, but he does not know how he could possibly take the life of another being. Then Splat spots a Horned Beast in the distance.

The art of Twig #3 continues to be utterly engaging. All the flora and fauna depicted are alien to us. We know we are not on Earth, yet we clearly understand what is happening. The opening battle makes terrific use of color. The woodlands at peace are green, as we might expect. With the enemy appearing as fire, reds and oranges take over, consuming everything in their path. The enemy is overwhelming. We understand this is the end, especially when we see the fear in the eyes of the defenders.

We are now three issues into the story. Travel montages have been part of every issue and this one is no exception. It is incredible how many new things there are to discover in this world. Every panel of a montage is a little masterpiece, a cameo of a new and strange place. From sea creatures belching out huge bubbles that Twig can float on, to an enormous wall in front of a gigantic eye, we are captivated from beginning to end.

BOTTOM LINE: AN EXCITING STORY IN AN ENCHANTING WORLD

The story of Twig #3 is a straightforward quest, but so much of the fun is purely in the journey itself. It is glorious eye candy, and the more I see of it, the more I do not want the world to end.