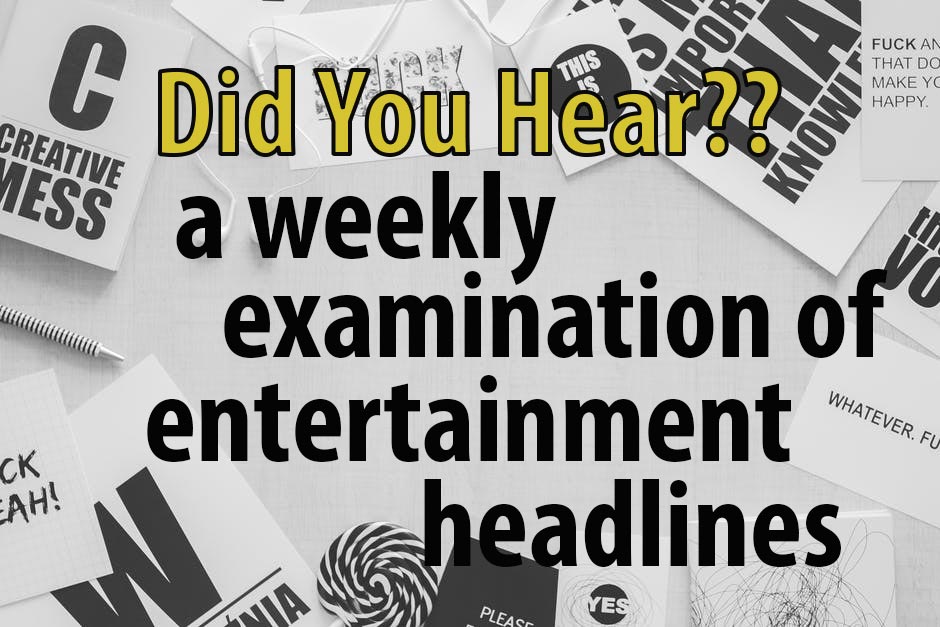 Thor Love and Thunder is Here Can you believe THOR is the first character in the Marvel Cinematic Universe to get a fourth installment of all the Phase 1 Avengers? My money would definitely have been on Captain America. Thor Love and Thunder opens today. I was able to see the movie a couple days early (check out my Instagram to join my journey to the screening and a separate video about 5 Things to Know Before You See Thor Love and Thunder!), and The Hollywood Reporter already has the initial box office reporter on the latest installment in the MCU.

The movie has already raked in $29 million dollars in “previews” (early hours/midnight showings), which is a strong lead for Thor Love and Thunder ahead of the full report we’ll see on Monday and I’ll likely be writing about for you in next week’s Did You Hear? feature.

International box office is also off to a strong start per THR:

The movie is also making a major push overseas, where it began rolling out midweek and earned $48.6 million through Friday from its first 42 markets.

Tracking suggests the superhero pic will score the third- or second-best opening of the pandemic era with $150 million or more domestically and possibly north of $300 million globally. In December, Spider-Man: No Way Home grossed $50 million in previews for a domestic start of $260 million (in recent days, the Sony and Marvel pic crossed $1.9 billion globally). And earlier this year, Doctor Strange in the Multiverse of Madness started off with $36 million in previews on its way to domestic launch of $187.4 million.

It appears amidst mixed reviews Thor Love and Thunder is going to continue the Marvel Studios trend of incredible box office success.

Variety ​​has reported that the latest season of Netflix’s Stranger Things is dominating household ratings.

“Stranger Things” was watched for 4.2 billion minutes during the June 6-13 viewing window, which was Season 4’s second full week of availability, according to Nielsen’s newly released Top 10 Streaming rankings. The series has now had three of the measurement company’s top five streaming weeks ever.

Last week’s showing of 7.2 billion minutes broke Nielsen’s record for the most-viewed title in a single week. No. 2 and No. 3 on the list of most successful streaming weeks are “Tiger King” and “Ozark,” respectively, both having become the first titles to break 5 billion minutes in March 2020. No. 4 is the performance of “Stranger Things” the week of May 23-29, during which Season 4 was only available for three days. This week’s 4.2 billion minutes of streaming mark the fifth-highest ever week of streaming.

Superhero show The Boys from Amazon Studios is in the #2 spot behind Stranger Things. Despite seasons of varying qualities Stranger Things has managed to keep its popularity and momentum going since it smashed onto Netflix in 2016.

Season 5, the final season, of Stranger Things is set for release in February 2023. Fans have a lot of burning emotional questions they want answers about some of the characters – and whether or not they are alive – while other entertainment industry eyes will be watching to see if the Duffer Bros series manages to rank even higher in the ratings on their final showing.

San Diego Comic-Con is coming up on June 20th and Marvel has confirmed their presence at the convention (not always a guarantee given Marvel Studio’s dedication to breaking news at D23 – scheduled for September this year), as well as releasing the following panel information:

60 YEARS OF SPIDER-MAN: A THIS WEEK IN MARVEL SPECIAL EVENT

Ryan Penagos (aka Agent M, VP & Creative Executive) and Nick Lowe (VP & Executive Editor) are joined by the one-and-only Dan Slott (Amazing Spider-Man, Fantastic Four) and other surprise guests for a very special live episode of the This Week in Marvel podcast! Ring in the 60th year of Spider-Man with Amazing Fantasy #1000 and see what dangers lurk at the Edge of the Spider-Verse!

C.B. Cebulski (Editor in Chief) is here to answer your burning questions! Come to inquire about everything and anything you ever wanted to know about the Marvel Universe. What is the wackiest version of Spider-Man from across the multiverse? Does the Illuminati have a poker night? Which Marvel editors would survive Judgment Day? You’ll never know for sure unless you attend this panel! Featuring special guest TBA – and an exciting giveaway!

Nick Lowe (Executive Editor) and C.B. Cebulski (Editor in Chief) prepare to pass judgment on their fellow panelists, including Adam Kubert (Wolverine), David Pepose (Fantastic Four) and other Mighty Marvel guests! With the Eve of Judgment already behind us, join this can’t-miss discussion about what trials and tribulations are just around the corner for the Avengers, X-Men, Eternals, and the rest of the Marvel Universe!

Marvel’s most famous panel returns! C.B. Cebulski (Editor in Chief), Nick Lowe (VP & Executive Editor), and editors Darren Shan and Lauren Bisom lead a line-up of luminaries including Christopher Cantwell (Iron Man), Ram V (Venom, Carnage), and Collin Kelly & Jackson Lanzing (Captain America: Sentinel of Liberty). What lies ahead for Shang-Chi, Ms. Marvel, Ant-Man, Ghost Rider, and the rest of the Marvel Universe? And what is the mysterious looming danger of the DARK WEB that threatens the future of Spider-Man and the X-Men? This is the only place you can find out! Come for the incredible reveals and stay for a unique giveaway!

The Women of Marvel are here! Writer and podcast host Angelique Roche will lead a lively discussion with Marvel stars including Senior Editor Lauren Bisom, author Nic Stone (Shuri: A Black Panther Novel), and other Mighty Marvel Guests! What is it like for women working in the industry today, and what is next for Marvel’s woman-led titles? And don’t miss a special giveaway at the end of the panel!