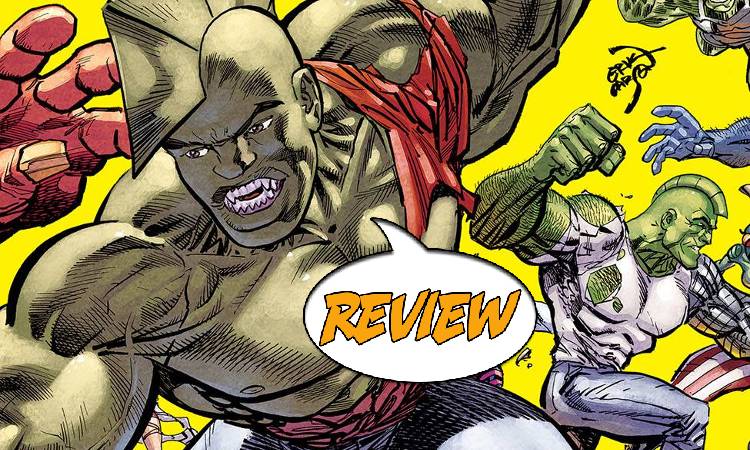 Previously in Savage Dragon: Malcolm Dragon and his father-from-another-reality, Paul Dragon, join forces to take down the Vicious Circle, but they’re greatly outnumbered and hopelessly outgunned!

MORE THAN JUST A FIGHT

It’s been nearly six months since we left Malcolm Dragon and his alternate-universe dad, Paul Dragon in Chicago, ready to face down a new and revitalized Vicious Circle. This issue picks up with all-out combat, as the Dragons actually comment that they don’t even know who most of the idiots they’re fighting actually ARE. (Malcolm looked up a few in “the wiki,” which I find amusing, for some reason.) Battle Girl’s attempt to deliver some of Malcolm’s healing blood to Freak Force member Horridus doesn’t go quite as well, as even with Mighty Man’s super-speed intervention, the hero dies of COVID-19 before the serum can be injected. Dr. Larry Bradford and his nurse, Ann (the father and mother of Mighty Man’s new host, with Ann having been Mighty Man herself) decide to inject other patients to try and save their lives, with explosive results. Equally destructive is the collapse of the Vicious Circle’s headquarters, thanks to Mako’s ripping out the throat of the super-powerful Brawn, while the syndicate’s new leader, Samurai, escapes to murder Insect, the villain who double-crossed the team to notify the Dragons.

MY GAWD, WHAT A BODY COUNT

In addition to Brawn, Insect, and Horridus, this issue features the death of Ann and Larry, more than 100 bystanders and patients at Hillman Hospital (who all explode from a contagious combination of Malcolm’s blood and the COVID virus), a horde of Vicious Circle members, including long-time regular Roughneck, best known as “that guy with the blue skin and screws in his head.” It’s pretty overwhelming, especially juxtaposed against the real backdrop of the pandemic. Last issue, after all, featured Malcolm and Maxine’s kids getting their vaccines as a publicity stunt, while Maxine laments that things still haven’t returned to normal for their family. Balancing the real world with the mega-drama of Savage Dragon is a hard row to hoe in the best of circumstances, but this issue really feels like a creator who just wants to clear the decks. Larsen actually admits to running into writer’s block in this issue’s letters page, which combined with the launch of Ant, is the reason why this issue is so late. The art feels as creative as ever, especially the vivid sequence of the building collapse, but the story doesn’t have the same joie de vivre.

BOTTOM LINE: NOT SURE HOW I FEEL ABOUT THIS

Since 1993, I’ve been reading this comic book off and on, picking it up regularly until something happens that throws me off and makes me give it up… but I always come back. Savage Dragon #262 is NOT an issue that signals a swing back to the negative side of my love/hate relationship, but it is the first issue to really show the seams this obviously in several years, with strong art helping to make up for a story that feels like the proverbial Hail Mary, earning 3 out of 5 stars overall. Erik Larsen is one man, with complete control of this universe and a firm belief in the power of death in comics, but having so many familiar faces kick the bucket all at once is quite disturbing for me as a reader. I’m hoping that this issue signals that he’s broken through his creative block and is ready to blaze some new trails in the lives of the Dragon family.

I've long said I have a love/hate relationship with Savage Dragon, but this issue is the first in a while to cycle back towards making me think I need a break.