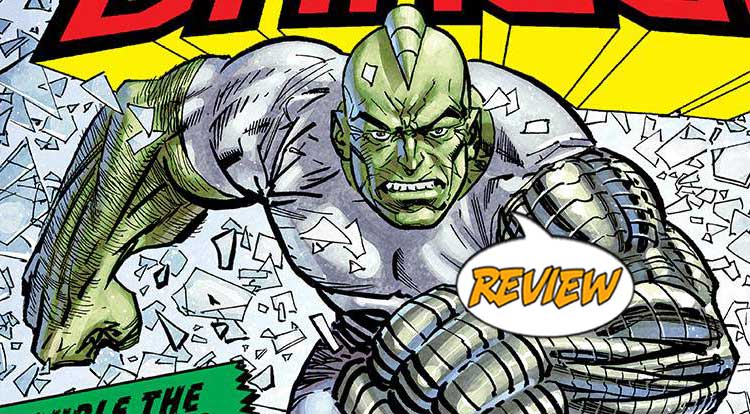 Previously in Savage Dragon: Malcolm Dragon teams up with Paul Dragon (a version of his late father from another reality, now equipped with a cyborg arm), to take down the Vicious Circle once and for all!

Who will be standing when it’s all over?

COME FOR THE BLOOD-SOAKED COMBAT

Savage Dragon #261 starts with an amusing sequence wherein the new Mako (one of Larsen’s older characters in Savage Dragon) attacks groups of innocents who mistake him for King Shark from The Suicide Squad.  It features a schoolkid getting their head ripped off and a lot of screaming about “ripoff CGI movie monsters,” and I don’t recommend it for the casual reader.  Mako’s rage is triggered not just by the movies of James Gunn, but at being cut out of power in the Vicious Circle, a sort of super-powered mafia whose leader died last issue.  As he makes his way to the top of the organization, Malcolm Dragon is learning to enjoy hockey with his wife Maxine, getting his children vaccinated against COVID-19 (a process that he does on film to try and convince others to do the same), and dealing with Paul, the alternate universe version of his dead father who suddenly showed up on his doorstep.  Perhaps the most shocking moment of the issue comes when he gets a call from his half-sister Marsha in the United States, asking him to send some of his blood to help Malcolm’s former teammate Horridus, who is on a ventilator after a severe case of COVID-19.

STAY FOR THE COVID-19 MESSAGING

The main narrative thrust of Savage Dragon #261 is Mako’s search for the new overlords of the Vicious Circle, ending with Paul and Malcolm busting in at exactly the wrong time, but nearly as many pages are spent on Malcolm trying to talk his sister into getting vaccinated.  Honestly, I’m all for this sort of messaging in media, and the fact that it’s not subtle in any way fits perfectly with the Savage Dragon ethos.  Larsen’s work on this book is pretty much the last bastion of the kind of shifting-perspective, shared-universe storytelling that made Silver and Bronze Age Marvel Comics so great.  Larsen’s art is very strong in this issue, and he doesn’t shy away from depicting anything from interrupted fellatio to decapitations to close-ups of needles.  (The fact that the Dragon children have to get their injections in their tongues makes it even more unusual and a little hard to watch.)  All in all, though, this issue flows perfectly from scene to scene, ending on an impressive cliffhanger note and getting a LOT of things packed into a relatively limited page count.

In short, Savage Dragons #261 is a perfectly encapsulation of everything that makes this book great, as well as the things that make people shy away from it, with a wonderful synthesis of storytelling showing us exactly what’s on the creator’s mind, earning 4 out of 5 stars overall.  It’s easy to make fun of certain moments in Larsen’s works, but to pull out one graphic sex scene, or bloody battle sequence belies the fact that this is exactly the book that Larsen wants to make every month for nearly thirty years.  Whether you are always on board with what he wants to say or do, you have to admire the commitment to constantly changing up what Savage Dragon is about.

The back-burner Vicious Circle plot comes to the forefront, while Malcolm deals not only with fistfights but vaccinating his kids. I don't know if I would recommend it, but I enjoy it.