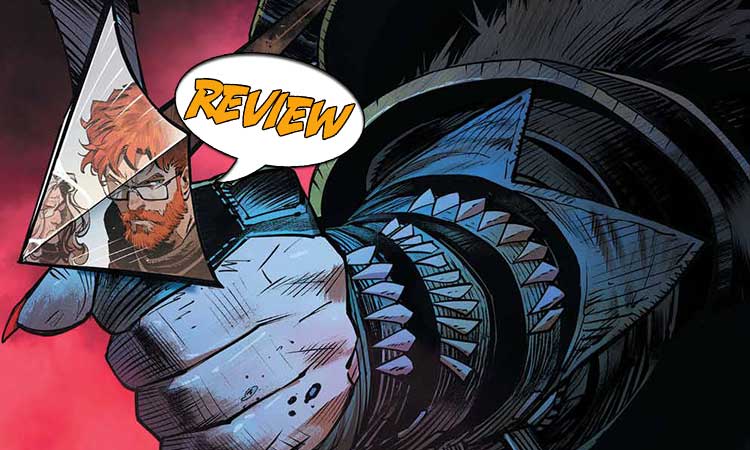 Once and Future #25 Review

As the battle between Arthurs rages on, Bridgette works hard to throw as many wrenches into the works as she can. How broadly does the legend of Arthur reach? Find out in Once and Future #25 from BOOM! Studios.

Previously in Once and Future: In the Otherworld where legends have power and can come to life, King Arthur has returned, but in two conflicting versions. They meet in battle at Badon. Merlin, adamant that Arthur not die here, alerts him that Guinevere has cheated on him. Meanwhile, Bridgette talks to the sea god Leir, caught in Shakespear’s work as Lear, and tries to get him riled up enough to interfere. Not only that, she left the Armoury with a quill pen of Shakespeare’s. This is no ordinary pen – it is made from part of an arrow which is located in the woods near Nottingham.

Once and Future #25 opens with Robin Hood confronting Bridgette, Duncan, and Rose. There are three of them; he has three arrows that must be used. Bridgette tells him that the people of Britain are suffering in the midst of a war of false kings. This seems to get his attention. Then Bridgette demands that they be able to join his Merry Men whom we meet as small, flying, insect-like creatures with toothy maws in their bellies.

Elaine has gone to the Grail Castle where she claims she was sent by Bridgette. Jack is suspicious of her, but after Elaine punches him out, Rose’s father is willing to let her in. The residents still insist on quizzing her. Elaine does admit to being Bridgette’s daughter, estranged but not dead as they had been led to believe.

Bridgette went after Robin Hood, she admits, because not only is he someone willing to fight unjust kings, but his story is older than that of Arthur. Once upon a time, he was just a normal guy who had had it with the nobility. His story has been changed over the years to turn him into a noble as well, but Bridgette thinks his story ties back to Britain as a land, and she is hoping she can use that primal connection. She also hopes that by distracting the Arthurs and focusing their attention on Robin, many people’s lives will be saved. She is hoping they can make it until Christmas. But first, they will have to fight Little John.

The undead Arthur gives the order to fall back. A third Arthur has come upon the scene and Merlin describes him as a “creature of steam and capital.” He insists Arthur must retreat. Arthur laments that all he wants to do is to be left alone to kill Anglo-Saxons. Is that, in fact, too much to ask?

Bridgette, naturally, has another motive for joining the Merry Men. Britain was once one forest. In the Otherworld, all the forests are one forest. Travel through them, and you can travel anywhere. They slip through to the battlefield and see the immense mechanized Arthur. Little John, who is a giant, has an idea for them to reach this new foe. This gives Robin a target, and they slip away through the woods.

But they also slip through time a bit and end up in the summer on a beach by the sea in another location associated with Arthur, at least indirectly.

Not only do I enjoy that the legendary characters in Once and Future #25 do not look as they have traditionally been envisioned, but they have a rather primal look to them. The idea that some of them tie back to older times, to older stories than the ones we know, feels tangible. A case in point is Robin Hood. He has a bow in hand, his outfit is rustic, and swirls of green surround him but his face is hidden by his hood so all we see are unearthly eyes. He drifts in and out of focus. His Merry Men look like small nightmare creatures.

But the story of Arthur can be adapted many times and the symbolism can vary. Merlin described the new Arthur as being made of steam and capital, and indeed he looks like a steampunk imagining of nineteenth-century industrialism and capitalism in the form of a giant mecha. Once and Future #25 does not cease to surprise, and I enjoy seeing this envisioning of legend as seen through the lens of a different era.

Once and Future #25 continues its march through literature, giving it new and symbolic life and finding the eternal threads that run through older legends.

The legend of Arthur is so eternal that it has taken on many forms.