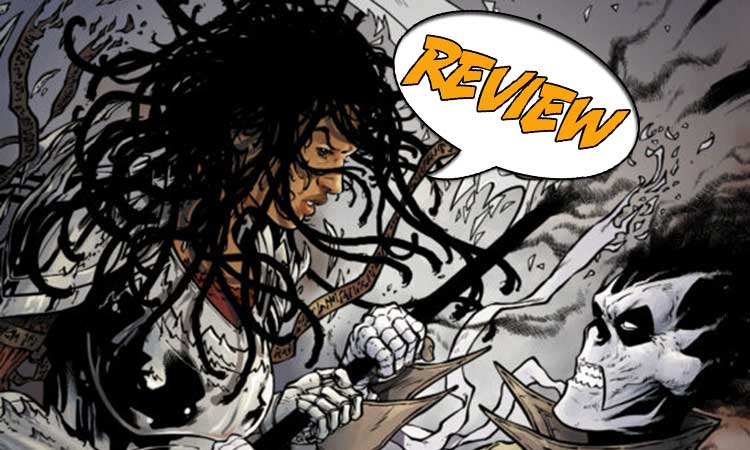 The Deadside takes on human form and manifests on Earth. She is essentially a god. Can Shadowman and his friends send her back to her realm and close the connection between worlds? Find out in Shadowman #8 from Valiant Entertainment!

Previously in Shadowman: Deadside manifests on Earth in a human body while Blights spread further around the world. The veil between life and death grows thinner. Fear and hate further fuel the Blights. The onslaught appears to be inevitable and unstoppable as though the Deadside is the ultimate force of nature. Shadowman realizes that when she takes on a human form, she is also susceptible to other human traits, such as becoming reckless. And among the humans, hope gives them additional strength. The world needs Shadowman and he must decide – is he a priest or a warrior?

THE END, OR A NEW BEGINNING?

The Deadside has taken on physical form and come to Earth. Reality struggles against nightmares in a battle that spans the globe. Fighting on behalf of reality are the Abettors who travel to the actual Deadside. The veil between it and reality grows ever thinner. While the Deadside can flow to Earth, some of reality can make the reverse journey.

But the Gods of Voodoo also make their home in the Deadside and Shadowman entreats them to help. Baron Samedi claims that they did, but Jack did not follow their guidance. He counters that they did not tell him the whole story. But the Abettors have a plan. If they can get enough power, they can perform an exorcism to remove her newfound humanity from Deadside. Without this to anchor her to the world, the Loa will be pulled back into her proper place.

The problem – they need a lot of power to do this. The Voodoo Gods claim they have pledged themselves to Deadside. Punk Mambo summons the energies and Alyssa channels them, drawing that energy from the Gods. Jack and the Abettors temporarily become the Voodoo Gods. The struggle begins in earnest, trying to separate Deadside from her human body, a struggle complicated by the arrival of Master Darque and Sandria.

Deadside feels the pull and looks at Earth where she is. Is it so terrible, she muses, that she just wanted to live? People wanted her to come to Earth. She even twists Jack’s words against him. He wanted the Earth and the Deadside to live as one. She does not see that she is not living with the Earth; she is destroying it.

The exorcism starts to take effect, but not quite as anyone intended. Jack understands that even having a small taste of life will become an irresistible temptation. Deadside will keep trying to come back. Shadowman tweaks things a little bit. The Deadside is drawn back to its proper place, leaving some pieces behind, some Blights. And a human woman – the human body the Deadside created, but now an independent human in her own right.

SINKING INTO MADNESS AND CHAOS

On its surface, Shadowman #8 is about the destruction (or potential destruction) of the earth. The art shows this happening, but the feeling of it is more metaphorical. It opens with crazy amounts of fighting, buildings crumbling around Deadside, strange monsters walking the Earth. This is an apocalypse. It is echoed by the unrest in the Deadside realm, except that it starts out as a chaotic-feeling place. To show us the unrest there, the art style itself shifts, so some panels are monochromatic, or the line drawing resembles pencils more than inks. I like the way that multiple techniques are used to present the sensation of unrest.

We have seen Deadside in her physical form now for a few issues. She is young and attractive, with a wide smile. Her eyes look old, though, and hardened. She comes across as confident and powerful, but there is something about her that is still not entirely human. When her spirit is banished and only the human form remains, we can see some similarities, but there is an openness about her, an innocence she never had before. We may be skeptical that she can still be a conduit for Deadside, but we can also believe that she is innocent. Out of the ashes of destruction, it feels good to see someone looking at the world as though it is a miracle.

Shadowman #8 is a dramatic ending to a significant arc. It can be challenging to find a good ending when the stakes are the destruction of everything. It’s difficult to see how this plays out around the world at large, but in the local environs of Shadowman, Punk Mambo, and the Abettors, it is a solid ending.