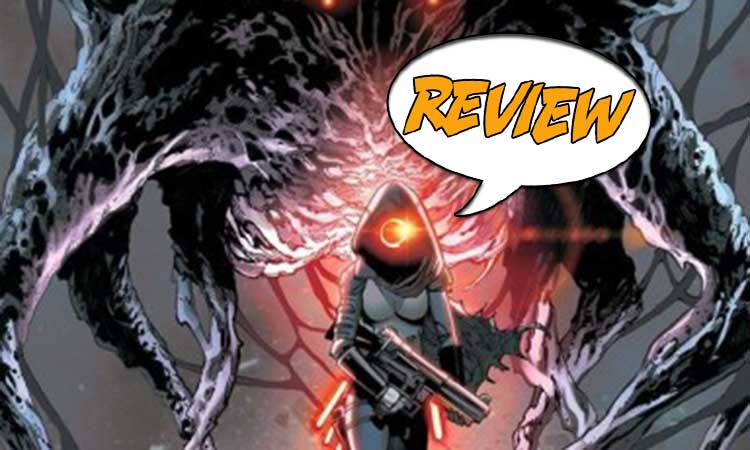 Val has found Blacktop Bill and he consents to help them and let them keep him as a prisoner. Does he have some nefarious plan up his sleeve? Find out in Nocterra #9 from Image Comics!

Previously in Nocterra: Sundog Convoy are down to their last lead for finding the place known as Eos, and that lead is Blacktop Bill. Mother tells them Bill is part of a military group called the Nocturnes and they are very dangerous. Emory continues to hear whispers from the Shades and he suspects that they are coordinating for an attack. Mother confirms this and mentions that something has been draining power from outposts. Blacktop Bill escapes from the Nocturnes who attacked him. They return to their leader who insists Bill must be killed before anyone finds out what they are up to. Bill cons his way into another outpost, kills everyone, and routes all their power through the helmet.

Nocterra #9 opens with a few thoughts from Bailey, and I think these are important because they explain one of the fundamental differences between her and Val. Bailey talks about people who remember the time before the Big PM and think about their future in terms of what might have been, had things not changed. They miss the times that were before. Bailey feels that she thinks more in terms of the future, and that there is a future they can get to. She prefers to believe that because of their experiences, people will be able to make this future better. If truth be told, this sort of dichotomy can be seen in the face of our current pandemic in some ways.

Sundog Convoy has caught up with Blacktop Bill, who wants to join them. But first, they must fight off a bunch of Shades. They nickname these Shades, “Hawkoons,” because one of the games they play is trying to identify the creatures the Shades originated from. The fight draws the Shades closer to the trucks, and when they get close enough, Emory hits the button to turn on the lights. Or he would have. He hears the Shades in his head again, and Bailey must hit the switch.

At least they have fresh meat to eat that evening, even if it isn’t all that tasty. Over the meal, Bill tells them about Luna, the military compound where the Nocturnes come from. They’re making more Nocturnes, he tells them, who are hunting him but now are likely hunting the rest of them. He tells them how Luna only targeted potential mercenaries. He also talks about his main rival, another Bill, although Bill insisted on calling him “William.” To hear Bill tell the tale, he beat him in a solo fight, but couldn’t care less about being a leader. Given what we know of Bill, this sounds entirely plausible. But we do also know that he’s basically a psychopath and as unreliable as they come.

Eos is purported to be located at Luna. Bill has not seen it, he says. But he’s heard about it. It is supposed to be paradise. There are people of light there – and we saw someone like that last issue. They knew Gus was working on his equation and it could mess up whatever they were doing, so that is why “they” killed him. Bailey accuses Bill of actually killing him. She particularly does not like him. He still tells her that if she wants to save the world, she is going to have let go of her ideals and fight dirty.

They make their way to Florida. They have a run-in with a group of Nocturnes along the way, and Bill has a little secret weapon that wins the fight and reminds us of how unsavory he is. And then he has a little midnight chat with Bailey.

EXPLOSIONS IN THE DARK

Nocterra #9 starts out with a bang as they’re in the middle of a blazing fight with Shades. It’s a wonder they can tell what creatures these Shades are based on. The talons are reminiscent of some sort of raptor, but their toothy maws just look horrifying. One of the interesting touches throughout this issue is how they treat Bill. In this fight, he is tied up to a tree. Against her gut reactions, Bailey does kill a Shade who starts to attack him. They do untie him at mealtime, although he is still handcuffed, and talk to him. He sits with them perfectly calmly, sounding matter of fact and genuine. We are not the only ones who do not trust him, but it feels odd to see him coming across as reasonable. It is very subtle, but we also see him work his way out of the handcuffs briefly.

He is tied up again and stowed in the back of one of the trucks as they drive. Along the way, Val hits a landmine. The explosion is huge and comes as a shock. She does have blast plates on her truck, but this does slow them down enough that the Nocturnes can get to them. The fight is chaotic, but I do love the car and truck details we see as the panels flash by. These vehicles are part of their owners’ identities and they have character of their own.

BOTTOM LINE: OUT OF CHOICES

Nocterra # is the point in the horror story when all the other options are dead ends, and the characters have no choice but to take the one that is the most perilous. They know it; we know it. It is inevitable and it leaves you dreading all the possible bad outcomes that could happen.

Blacktop Bill aligns himself with Sundog Convoy and even helps them out, which seems so unlike him.