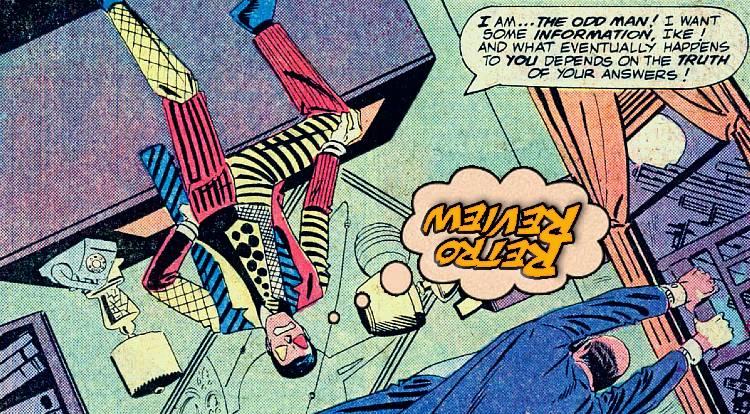 Fans of The Legion Clubhouse already know about the DC Implosion, a large-scale contraction of comics output that nearly ended DC Comics. But have you heard about The Odd Man? Your Major Spoilers Retro Review of Detective Comics #487 awaits!

Previously in Detective Comics: They called it the DC Explosion, an attempt to overcome Marvel’s dominance by releasing more titles and increasing the page counts of their comic books. Unfortunately, the plan also included increasing cover prices, immediately proving itself to be a problem. Combined with distribution issues from the difficult winters of ’77 and ’78, sales were so poor that DC canceled nearly half their ongoing titles and laid off a number of staff members. 31 titles bit the dust during 1978, with Detective Comics (the book that NAMED the publisher) barely missing the cut by being merged with Batman Family. Thus do we reach this issue, coming out six months after the ‘Tec/BatFam merger, bringing us one of Steve Ditko’s lost “weird guy in a suit” supers: THE ODD MAN! Like The Question, Mr. A, The Baffler, The Mocker, The Mask, The Whisperer, and probably more, Odd Man sports a sharp suit, but he also relies on distraction and psychological warfare like The Creeper, another Ditko creation. Our story opens in his special interrogation room, which rotates to convince criminals that they’re in the clutches of some sort of supernatural being and/or on hallucinogens. Jewel thief Ike Logan, for instance, spills the beans immediately, sending our patchwork pal on the trail of the villainous Pharaoh! This story was meant to be the first installment of an ongoing Odd Man backup feature in the pages of Shade, The Changing Man, but StCM was one of the casualties of the DC Implosion the previous September. With Detective Comics picking up the Dollar Comic format of Batman Family. Weirdly, the dialogue here is NOT the dialogue seen in the story’s first appearance in the pages of Cancelled Comics Cavalcade, making the Pharaoh’s dialogue much more stilted and affected, especially his cry of “INFIDEL!” It turns out that he’s working for a woman who styles herself The Queen of the Nile, a detail that becomes important when an out-of-costume Clay Stoner meets with a judge friend to find information about Odd Man’s quarry, only to discover that the administrator of the museum’s Egyptian wing is one Ms. Nyla. Captured by Pharaoh and Queen, it looks like the end for The Odd Man, but our hero has an ace up his sleeve: A solvent specially designed to melt the villain’s plastic encasements. Of course, he has no way of proving that it’s working from within the sarcophagus. It’s not clear in either version of the story why Nyla believes herself to be an Egyptian queen, nor what exactly the ornate necklace they’ve reassembled of the stolen jewels is going to do, but their ceremony is interrupted by The Odd Man’s special gimmicked necktie!

I mean, is it any sillier than a Batarang? Unfortunately, the accompanying smoke gloves cause the villain to accidentally encase his Queen in plastic (which is strongly implied, but never fully explained to be fatal), leading him to follow her into “mummification.” It’s a really weird ending, made even stranger by The Odd Man’s cries of “NOOO!” while standing approximately eight inches away from The Pharaoh. On the one hand, Detective Comics #287 makes a strong case for The Odd Man as an unusual new hero in the DCU, but it doesn’t really surprise me that this appearance was followed by a TWENTY-YEAR absence, leaving this story with 2.5 out of 5 stars overall. The rest of the comic is mostly forgettable stuff, save for Kurt Schaffenberger art on the Robin installment and Don Newton’s dynamic Batman, but it’s the “What Might Have Been?” of The Odd Man that fascinates me. Could have been another Doctor Strange? Or was he always doomed to be a one-shot footnote in comics history?

The only non-Batman family member in the issue, The Odd Man's debut ends up being something of a non-starter, never quite hitting the heights of The Question or the depths of Mister A's mad objectivism.

But man, what a cool costume!