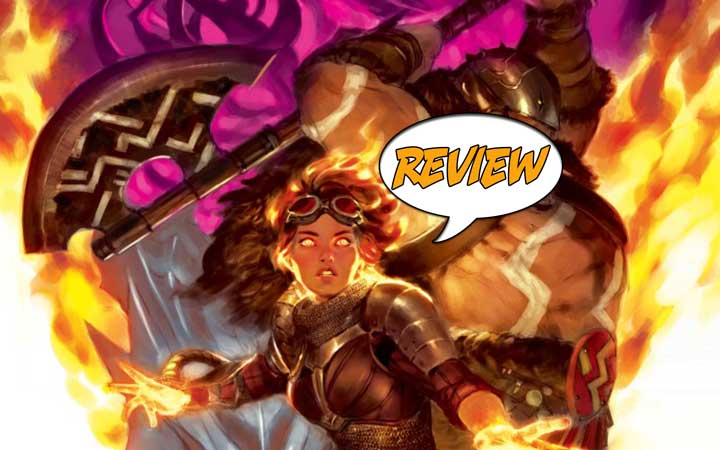 When Chandra can’t planeswalk to Ravnica, she goes looking for answers and instead finds Tibalt. What is he up to, and can Chandra stop him? Find out in Magic #11 from BOOM! Studios.

Previously in Magic: An enormous battle to defeat the forces of Marit Lage takes place on Amonkhet. Several Planeswalkers unite, with one group of them holding off the legions of the dead, and a smaller force working together to fight Marit Lage directly. To protect the Multiverse, Jace makes the ultimate sacrifice!

LOOKING FOR ANSWERS IN URBORG

Magic #11 opens on the plane of Urborg at the long-abandoned Stronghold. Chandra Nalaar is exploring it.

But how did she get here? The story jumps back three months, to soon after the Battle of Amonkhet. Chandra is talking with Teferi, not yet able to come to grips with the fact that Jace is gone. She decides she wants to see some of the others and very shortly learns that something is preventing her from planeswalking to Ravnica.

We return to the Stronghold where Chandra thinks she may find a solution to her problem. But as she pokes around, she hears voices. And not just voices – it’s someone talking about Ravnica. She peeks around a corner and finds Tibalt and Davriel Cane. They don’t necessarily get along with each other but are here together for some reason. Before she can find out this is, they discover her presence and there is a brief fight until Davriel Cane takes Chandra out momentarily with a spell. Then Tibalt and Cane get into a fight, but Garruk Wildspeaker shows up, angry at Tibalt. They fight, and enough time passes that Chandra recovers.

Tibalt pulls a lever and tells Chandra she isn’t fast enough, and whatever happens, is her fault. Then he and Davriel Cane vanish. Chandra rapidly realizes that he vented flowstone which is headed for the nearby village. She tries to enlist Garruk’s help, but he wants to keep chasing Tibalt while the trail is fresh. She heads toward the village as fast as she can and, at the last minute, Garruk decides to join her. Chandra takes advantage of this because he can get her out ahead of the flowstone, which she is able to stop. It turns out that she had Garruk Wildspeaker have not previously met. Before they have much chance to talk, Niko Aris appears, looking for Chandra’s help.

I do like the art in Magic #11. The planeswalkers are all clearly identifiable, and I particularly like how clean the linework is. Chandra looks young and is full of expression, which is delightful to see. Tibalt comes across as smarmy and overconfident and that is rather fun. They play off each other well in their first fight. Chandra lets loose with all her fire, and Tibalt just stands there and takes it. His calm and her temper make an interesting contrast. It also sets up Davriel Cane taking time to figure out what spell he is going to cast.

The flowstone looks like spiky shards of rock as it travels toward the village. The race down the mountain to get ahead of it judiciously uses some blurring effects to give the impression of speed. Flowstone is apparently magically animated, so technically sort of alive, so Chandra’s fire can affect it. The art makes good use of a couple of full page panels to impart an explosive sense of drama, which seems appropriate for Chandra.

If you like the Magic Planeswalkers, Magic #11 is the beginning of a new arc. While some planeswalkers are out of the picture, there are already several involved with the potential for more than one motivation. It looks like it is setting up for another big challenge.

Chandra’s inability to travel to Ravnica leads her to Urborg – and into another conflict!