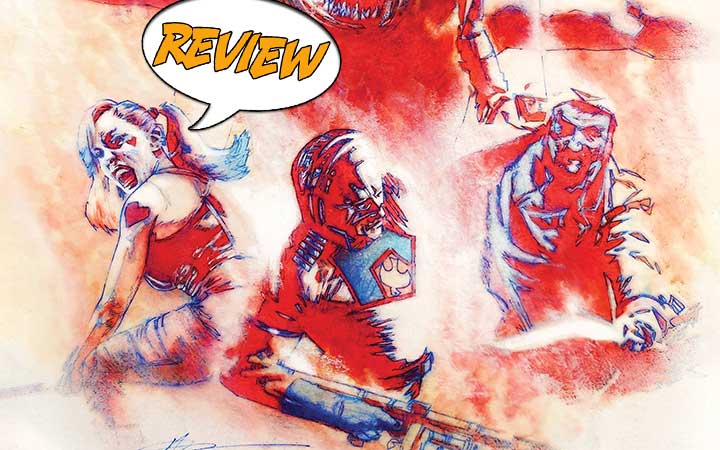 The squad is taking on a target unlike anything they’ve ever dealt with and it’ll take a whole new approach to succeed.  Your Major Spoilers review of Suicide Squad: Blaze #1 from DC Comics, awaits.

Previously in Suicide Squad: Blaze: A super-powered being without any apparent motives has begun a killing spree across the world and with none of the normal heroes able to combat it, the Suicide Squad is called on.

TIME TO POWER UP

Suicide Squad: Blaze #1 opens up with what looks like a familiar scene of a spacecraft landing in the middle of nowhere.  Years later the issue’s narrator, Mike Van Zandt is involved in a bad car wreck caused by an inexperienced superhero and then finds himself in prison.  Elsewhere a super-powered being is killing people at random across the world in brutal ways but is so fast that no one can catch them.  Amanda Waller approaches the Suicide Squad and offers them something that is called the Blaze treatment which would give them superpowers but will kill them in a few months.  They all refuse.  The treatment is then offered to any prisoner that can make it through The Suicide Squad.  5 people manage to make it including Mike.  They are then given the treatments and given their superpowers.  Not long after they are sent on their first mission and have their first encounter with their target, with mixed results.

Suicide Squad: Blaze #1, has an amazing premise all around.  From the villain basically being a hormonal Superman acting on primal urges, to the nature of the blaze treatments, to the use of the traditional Suicide Squad members as trainers, it’s all really interesting and full of promise.  The problems come from the characterizations.  There’s a lot of effort put in to try and humanize everyone, while establishing some sort of emotional stakes upfront which don’t really land, mostly due to the fact that they also try and keep with Suicide Squad status quo and go out of their way to also make all the characters unlikeable jerks.  So whether you’re trying to look at this as a “root for the bad guy” thing or a “ragtag group of loveable losers” type thing, neither are committed to which leaves the issue full of flat moments with unlikeable characters.

The art in Suicide Squad: Blaze #1 is really nice.  The faces especially are full of emotion and give the characters a lot of life and personality.  In action moments things get a little disorienting.  It’s clearly an artistic choice and not any sort of failing on the artists’ part, but that doesn’t mean it necessarily works here and most of the action suffers because of the stylings making things hard to discern.

Suicide Squad: Blaze #1, comes in swinging with a home run of a premise that is well thought out and is utilized fairly well.  The issue is hamstrung though by an unlikeable cast put into strange situations that feel out of place for the book and an art style that is hit and miss.  2 out of 5 stars.

Suicide Squad: Blaze #1 sets up the possibility for a really intriguing series and does a lot to establish a solid premise. Its unlikable characters put a damper on a lot of that promise though.