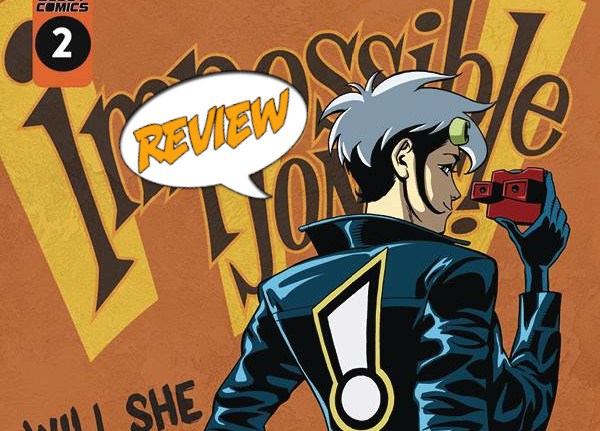 Previously in Impossible Jones: Isabelle Castillo was a criminal trying to get her next heist. However, when she tried to rob Tech Arcana, she found herself in a mysterious chamber that changed her physique and caused a huge explosion. Suddenly coming back to consciousness, she realizes that she can now change the shape of her body with a simple thought!

Impossible Jones #2 begins with Belle trying to escape Tech Arcana security. She first tries to deceive her opponents by pretending to be a knocked out guard but ultimately her plan doesn’t work. She is suddenly tased and falls off the building! Surprisingly though, she is extremely springy and bounces off the floor and into the water. Swimming to safety, she notices that she can control her outfit with just a thought and changes her jump suit into a swimsuit. She is thus able to escape her pursuers before she is caught.

Belle thus starts going to her old associates to figure out why she was left behind and ultimately realizes that they didn’t plan for this to happen to her. Instead, she sets her eyes on someone called the Monster. But now she has a new enemy, someone called the Saint of Knives who wants to cut her!

I didn’t remember the first issue very well. I remembered the gist of a superhero who was actually a thief. But I couldn’t remember what the characterization of Belle was. What I am seeing here is a character thirsting for revenge because she being left behind. When we look at her dialogue, she doesn’t seem to be that harsh character but rather a quirky light-hearted one. These two elements of the protagonist make her unrelatable. Now, I admit that maybe this stuff was set up last issue and I don’t remember it, but this feels out of place. But that doesn’t overcloud the fact that the setting has a lot of potential. There are a series of mysteries surrounding Tech Arcana that I want to explore.

I really enjoy the series and I think there is a lot of good things here. It just seems that the writers are trying to get to a certain plot point and has missed the characterization of Impossible Jones. But maybe that is my own perception as well. Impossible Jones #2 is a 3.5 out of 5 from me!

Impossible Jones #2 sets up engaging worldbuilding but looses the characterization of the protagonist at times.