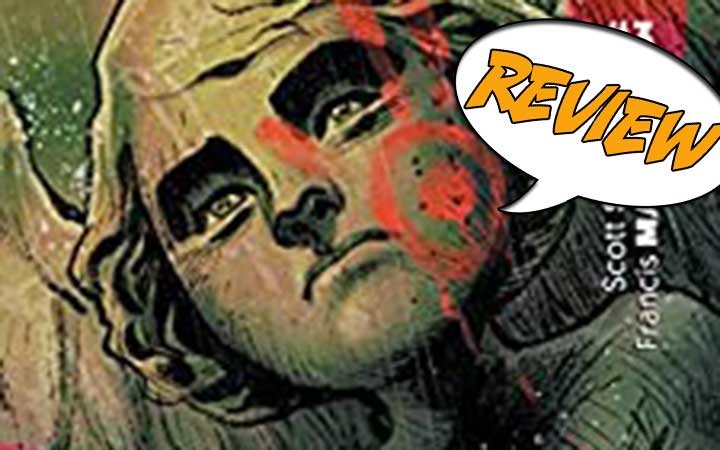 Sam’s investigation into his ex-wife’s death takes him places he never expected to go, and catched the attention of someone he could’ve never expected, Your Major Spoilers review of Clear #3, awaits!

Previously in Clear: After discovering a clue after his ex-wife, Kendra,  apparently killed herself,  Sam Dunes has been investigating her possible murder.  This has led him to the door of a group of black market programmers.

DOWN BUT NOT OUT

Clear #3 starts off with Sam reliving the tragic events that resulted in the apparent death of his son Baxter, while he bleeds out from gunshots.  At the last moment though, Sam snaps out of it realizing it was all part of a veil he had been placed in.  Once clear of it, he confronts the group called 1518.  They tell him that Kendra had been trying to develop a special kind of veil with their help.  This conversation ends up with Sam heading for the woman who had originally hired him, who he now believes was involved with Kendra’s death.  After their conversation Sam discovers his next clue, but is then attacked by a strange assailant.

Clear #3 is another entry into this series, hat doesn’t utilize the great premise they established back in the first issue.  A murder mystery in a world where everyone sees their own version of reality seems ripe for mind-bending and mysterious stuff. But, so far we’ve seen very little in terms of the “veils” being used.  Everything is presented pretty much straight-forward.  This unfortunately reveals that there isn’t really much here that’s unique, especially with this entry into the series.  This issue acts as that typical chapter in most murder mysteries, where the detective uncovers some shocking truth about the victim that suddenly blows open a simple murder case into full-blown conspiracy.  But once again, without it’s own twist to the formula, nothing sets this one apart from all the rest of the detective stories out there. Even worse, it manages to take the one unique element, the veils, and diminish it to a point where it’s only there to explain the presence of a flashback, which really didn’t need explanation.

THE BOTTOM LINE:  A FAILURE TO UTILIZE WHAT THEY GOT

Clear #3  is another chapter in a series that has a lot of things going for it.  There’s a good setting, with plenty of socio-economic intricacies that can be explored, there’s a strong main character who has a decent amount of emotional depth, a plot that has high stakes for the characters involved, and a gimmick that could really set this story apart from others like it.  Unfortunately it doesn’t capitalize on any of this.  Instead what we get is a pretty run-of-the mill story with very little in terms of surprise or intrigue. 2.5 out of 5 stars.

Clear #3 manages to continue the disappointing trend this series is on, where they continue to ignore the big thing they focused so much on in the first issue, leaving this feeling like just another detective story.