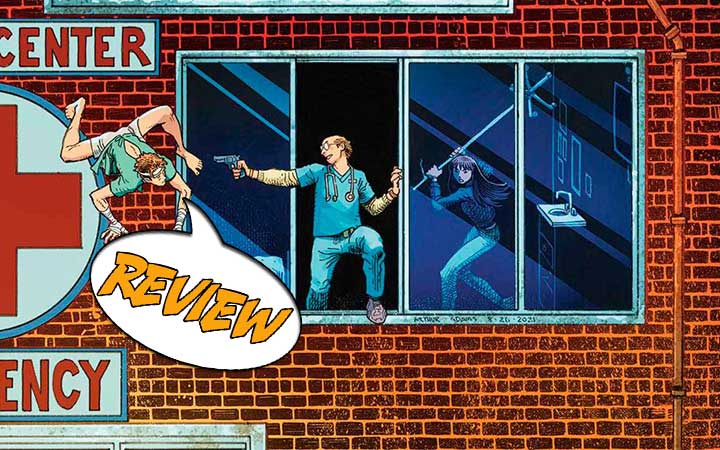 Movies and television have conjured some scary moments that have scarred me for life, but rarely do comics freak me out. With Peter Parker stuck in the hospital, Marvel Comics brings the creepy in The Amazing Spider-Man #82.

As a wee lad, I hated watching scary movies, because… well, they scared me. They gave me nightmares, and had me looking over my shoulder for weeks on end. Forget walking up the stairs from the basement, I would run, just incase a Frankenstein or a wolfman would try to grab me. John Carpenter’s The Thing (1982) freaked me the heck out so badly, that it took five years before I would even try watching another scary movie again. We won’t talk about the Alien incident…

By the time I got to college, the things that go bump in the night didn’t scare me as much, and I began to enjoy the visceral reaction of jump scares and the unknown. When The X-Files debuted in 1993, I was fully on board the paranormal train, ready to go wherever Mulder and Scully took me. Then, season two brought us The Host, and the Flukeman. And like many people who watched the episode, making sure the lights were on and fully searching the bathroom before use became routine.

Everyone has something that triggers them. For some, it is the fear of being in the hospital alone; not know who the people are coming and going. The person in the bed next to you is there one day, and gone the next. Did they get better? Did they transfer to another room because your significant other keeps visiting you at all hours? Did they die while you were going in and out of consciousness? And who is that one guy who keeps talking about “special circumstances?”  Something isn’t right about that guy…

These are the things that a bed-ridden Peter Parker needs to address, but like the other patients in the hospital, he becomes the target, instead of the hero. Writer, Saladin Ahmed taps into those things that scare us; not just the orderly that turns into a monster, but the scares that come from seeing our hero in real jeopardy. In The Amazing Spider-Man #82, Saladin not only scares the readers with the monster of the week, he flips the roles we’ve come to expect from our horror movies. Instead of Mary Jane playing the damsel in distress, it is Peter who is trapped, unable to get away from the horrors of the hospital. The gender reversal is the most refreshing part of the issue.

Artist Jorge Fornes favors six and nine panel pages in this issue, and while it can feel tedious at times, the pages with more panels are usually Fornes sharing Peter’s point of view with the reader. Having recently come out of a coma, Peter is still fading in and out of consciousness, and being able to show that on the page adds to the overall tone of the story. It all builds to a wonderful moment when a twelve panel sequence leads to a nearly full page reveal of the monster. Those who are aficionados of horror movies will really appreciate how Fornes builds the suspense to the big jump scare.

While hospitals have moved away from the garish green florescent lights of the past, we still associate that sickly color with hospitals. In The Amazing Spider-Man #82, colorist Dan Brown plays with the color scheme to add to the tension Ahmed and Fornes have already built into the story, giving it the extra punch that brings the issue together. When we do get splashes of red, we suddenly realize it isn’t because Peter in extreme pain, but rather his Spidey-sense is going into overdrive.

I’m not a huge fan of heavy contrasts, but Fornes and Brown use it to their advantage here. Overly lit hospital hallways and rooms necessitate areas of flat colors, and yet every hospital room I’ve been in has dark corners and shadows. And if we’ve learned anything from watching Jaws (1975), it is less is more, and keeping the monster in the shadows adds to the creepy mood of the story.

BOTTOM LINE: HORROR FOR THE HOLIDAYS

There are three general story arcs taking place in The Amazing Spider-Man: Peter Parker’s health, Ben Reilly, and the Daughters of the Dragon working for the Beyond Corporation. While we do get a short sequence of Colleen Wing and Misty Knight in the sewers, I’m glad this issue focused on Peter Parker, giving us a story where he is the central character, albeit one sidelined while bearing witness to the action around him.

I don’t know if The Amazing Spider-Man #82 was supposed to come out in October, or if supply chain issues necessitated pushing the release date to December, but having a horror story arrive at the height of the winter holiday season is a much needed diversion. Even though I am probably going to have nightmares, this was a fun read, and earns 4.5 out of 5 Stars.

The issue is full of scares, both real and imagined, and is a great diversion from the holidays.