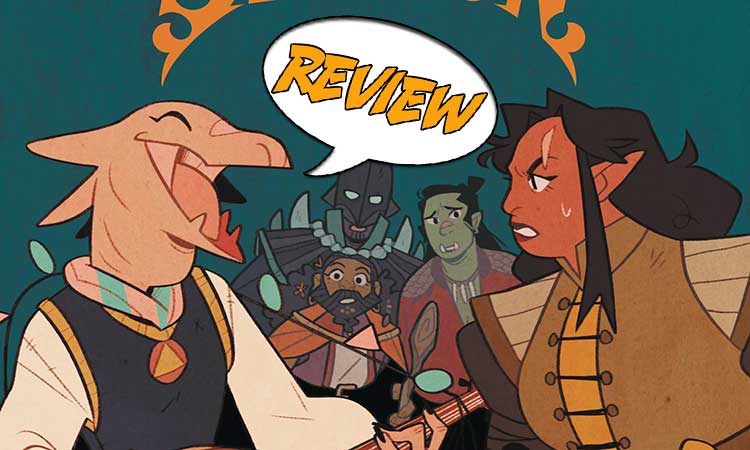 A gaming group returns to their original campaign. But can they rekindle the magic…and complete the campaign? Find out in The Last Session #1 from Mad Cave Studios!

Previously in The Last Session: Friends Jay, Lana, Drew, Walter, and Shen have been playing Dice & Deathtraps together since high school. As they reach the point of finishing college and going their own ways, they decide to complete their unfinished first campaign.

GAMING AS A METAPHOR FOR LIFE

The Last Session #1 opens, fittingly, with the lead-in to the first session. Five high school students – Jay, Lana, Drew, Walter, and Shen – join one of their school’s clubs, the Gender Sexuality Alliance. When the president doesn’t show, they start a game of Dice & Deathtraps with the optimistic thought that they will finish by winter break. Any of us who have played RPGs know how likely that is.

Cut to four years later, where we actually meet the characters. Lana is a Language Studies major with a paper to write – until the text announcing game night arrives. Drew is a barista and aspiring author. Shen is a photography major; Walter is undecided. Jay is the DM, and his partner Cassandra is excited to meet his friends – and to join the game. The player are excited not only to meet her but also to revisit their very first campaign and try to wrap it up.

And then it is off to the game! Cass is playing a Dragonkin bard, and she is cheerfully optimistic and a wide-eyed innocent when it comes to the game. I have played that character before. She meets the group by chance after setting off a trap, and it doesn’t take long for the group dynamics to become apparent.

Cass’ character (Kezz) is quickly accepted to tag along with the group. She quizzes them about what’s going on, wondering about the big bad guy, and it seems the group kind of never thought too hard about that as they are busy concentrating on killing all the monsters. She does help out when they need a distraction, but wandering a little further, she sets off another trap and suddenly they have a big monster to fight.

I do like the characters in The Last Session #1. They’re a diverse and interesting group right from the start. But we really get to know them as they all receive the text message about game night. Each page shows the drudgery of their day-to-day lives, and the body language reflects that, often with some humor. But the siren call of gaming brings each of them to life. It may be a bittersweet life, as they know they’re all going to be moving on, but we get that sense of excitement about the game.

The characterization is important as we transition into the game. The characters bear some resemblance to their players, but the connection is made through their color palettes from how they dress in their real life. It’s a clever way for us to make the connection between the two and keep track of who is who without having to take a lot of time to explain it to us. The delightful facial expressions continue as, like many RPG characters, they all seem to take themselves a little seriously.

BOTTOM LINE: A SLICE OF LIFE WITH HUMOR AND HEART

I think there are a lot of us who can identify with the characters in The Last Session #1. Life’s major transitions can affect games in big and sometimes surprising ways. As an opening issue, I think this shows a lot of potential.

An old RPG campaign revisited – but with a brand-new character in the mix!