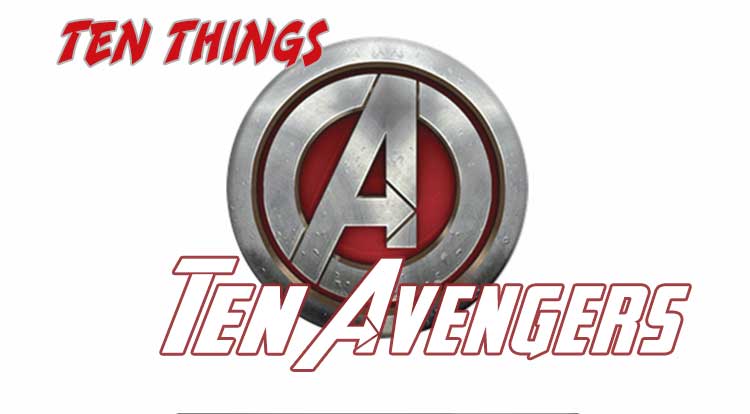 And there came a day, a day unlike any other, when Earth’s mightiest heroes found themselves united against a common threat…  Just, maybe, not the heroes you expected.  Welcome to Ten Things: Ten Avengers!

Whooshman-Bicarbonate Films, in conjunction with An Amateur Comics Historian and the ol’ bait-and-switch, Presents: Normal American teenager Bill Bryan was visited by a strange shadowy figure who gifted him with a hideous costume and pointed him at a cell of Axis agents out to destroy a local aviation company.  He fought them with the power of orange-and-green, and was never seen again.

Except… he wasn’t.  In one of the most maddening retcons in history, Bill and a number of other short-lived Golden Agers were revealed to have been conscripted by the U.S. military as a special unit known as the Crazy SUES (Special Unit: Enhanced Soldiers), with their comic adventures being entirely fictional stories presented by Timely Comics.  The Young Avenger was one of the only survivors of the battalion, but the cancellation of All-Winner’s Squad: Band of Heroes means that we’ll likely never know what was behind it all. Honor student and gridiron hero Reece Chambers saw his girlfriend fall victim to criminal jerks, teaming with her mad scientist father the create high-tech weaponry and an armor-ish costume to bring them to justice.  Weirdly, The Twilight Avenger’s beat was Tulsa, Oklahoma in the late 1930s, using his newfangled electrical weapons and athletic prowess to punch evil, zombies and evil zombies.  At one point, he even time-traveled to the world of Ninja High School, but… we don’t speak of it. A police constable in London, Mick Riley was mocked and derided by his peers for being small in stature, taunted as a shrimp and pulled from duty.  Fortunately, he was given a special wristwatch that empowered him with the ability to fly, increased strength and agility and durability.  Originally seen in Buster, a British anthology comic of the ’60s, a new version of Thunderbolt appeared in 2017 in the pages of Rebellion Comics, alongside several other Fleetway Comics characters who had gone by the wayside. When the alien Slig race wanted to invade the Earth, they first sent a robot called The Examiner to test the might of the native champions.  The Examiner battles Iron Man, Tigra, Wonder Man, Hawkeye, Mockingbird and Dr. Pym before being soundly defeated by the power of Moon Knight.  The robot’s destruction led it’s data to become corrupted, transmitting the information about Earth’s defenders back home in a scrambled fashion, and introducing the kids of the late ’80s to Rashomon in a roundabout way. Home-schooled by his parents, Butch Baxter lacks a lot of the context and social interaction that other kids would normally have, which made for confusion when he took on his grandfather’s Golden Age heroic mantle.  The confusion about his out-of-date nom de guerre makes for uncomfortable comedy, but Butch refuses to let changing context destroy his family legacy, even if it means explaining to people one at a time that he’s just happy to fight crime. After being endlessly tormented by jerks at the health club where he works as a janitor, Melvin Fer Junko III ends up humiliated in a tutu, causing him to fall out a window into a drum of toxic waste, then bursting into flame.  As origins go, it’s…  It’s a whopper.  Gifted with tremendous superhuman size and power by the irradiation/immolation, Melvin encounters a group of drug dealing scum whom he dispatches with with swift and blinding violence, leaving a mop as his calling card.  The city of Tromaville slowly comes to terms with their new monster hero, to the tune of several sequels, a cartoon limited series and a Troma Entertainment media juggernaut. Traveling to Argentina to study legends of a hero called El Gaucho, Don Caldwell encountered a man who claimed to have the actual uniform worn by that hero.  Gifted the costume by the mysterious man, Caldwell put it on to fight N*zi spies in Buenos Aires, then traveled back to the U.S. to battle the Axis at on his home turf.  After that single 1942 adventure, The American Avenger/El Gaucho was never seen again, though whether that’s due to retirement or an untoward end has never been clear.

He is one of the very few Golden Age Marvel heroes not yet revived in the modern age, but as the Young Avenger proved, that might not be entirely a bad thing.

One of the many amateur heroes of Champion City, the PMS Avenger (real name unrevealed) experiences enhanced strength and aggression when premenstrual, which admittedly limits her heroing activities.  One of the many heroes to apply to The Shoveler, Mr. Furious, and Blue Raja’s super-group, she didn’t quite make the cut.

It’s probably for the best, given that The Bowler will attest that the team ends up being something of a sausage fest, and her exclusion feels kind of chauvinistic, especially given that she’s probably more powerful than most of the Mystery Men. Best friend of Spider-Man, Miles Morales, Ganke Lee is in on his secret from a very early stage.  A hero groupie and avowed fan of X-Man Goldballs, Ganke is one of the primary reasons that Miles embraced his super-powers and masked adventurer life.  Sadly, his adventures as The Avenging Avenger are nothing but a dream enjoyed while acting as Spider-Man’s tech guy and web-fluid mixer-upper.

Any resemblance to the MCU’s Ned Leeds is entirely intentional. Who is this silicon-based superhero?  Vril Dox, the leader of L.E.G.I.O.N.?  Phase, the Bgztlian from the future?  Penry the Janitor?  Or have you noticed that you never see Garv of Dryad in the same place as the Masked Avenger?  Naaah, that’s impossible.  I mean, if he were Garv, he’d have joined the Licensed Extra-Governmental Interstellar Operatives Network as a young man, meeting Strata, the love of his life, and having a son named Rocky.  This guy has to be a different pink igneous biped.  Has anybody seen Igoo lately?

Once again, this week’s topic, Ten Avengers is all me, but feel free to follow along @MightyKingCobra to suggest your own!  There’s always more Ten Things madness on my Twitter or check out the full Twitter archive here!  As with any set of like items, these aren’t meant to be hard and fast or absolutely complete, but then again, now that a super-team by that name made a billion dollars at the movies?  Maybe it is.  Either way, the comments section is below for just such an emergency, but, as always: Please, no wagering!