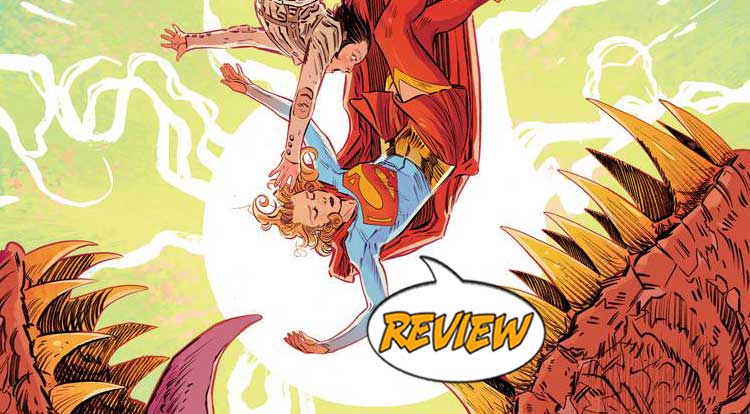 Light-years from home, on a strange alien world, Supergirl is waiting for the monsters to come.  Your Major Spoilers review of Supergirl: Woman of Tomorrow #5 from DC Comics awaits!

Previously in Supergirl: Woman of Tomorrow:  Supergirl steps into an ancient trap, stranding her and Ruthye on a planet of nearly perpetual night.  Now, the woman of steel must call on every remaining ounce of strength to combat the monsters left on this world to kill any super unlucky enough to end up on its surface.

Having finally caught up with the wicked Krem of the Yellow Hills, Supergirl finds herself falling prey to a Mordru Globe, a mystical device that teleports her halfway across the galaxy to world under a green sun.  It’s a planet that was partly designed to bedevil her cousin Kal, a world where he barely lasted 45 minutes against the various fauna and radiation… and it’s 10 hours ’til sunset.  She is immediately attacked by a giant creature, expending the remainder of her energy to defeat it, then running for cover with her companion Ruthye.  They take cover in the hills, with Supergirl passing out from the planet’s strange energies, while Ruth stands watch with her blade.  When another monster comes, Ruthye has to defend a delirious Woman of Tomorrow, dispatching a dinosaur with only a hint of pride at its demise, falling asleep next to Supergirl for a bit.  The rest of the issue is a tense race against time, waiting for the poisonous green sun to set…

…and it’s gorgeous.  The alien landscapes are strange and dreamlike, and Ruth’s determination is evident in her face in every panel.  The last attacking creature feels like an agglomeration of dinosaur and thistle, bright purple with pink and orange fangs, and it’s stunning.  That coloring decision is a little bit less successful, at least to my eye, as the strange green-sun planet is full of pink and purple rocks and plants, just bordering on garish for me.  Still, it’s an attractive issue, and the story, while simple, features some wonderful dialogue and character moments, including Supergirl teaching her alien friend to curse, then asking her not to tell Superman where she learned it.  The use of the magical Mordru Globe is a nice Silver Age callback, and the tension-building is expertly done throughout the issue.  By the end of this story, it’s clear that Ruthye is the real protagonist, which is actually not only fine, but preferable.

That is one of the minor downsides, though, as Supergirl: Woman of Tomorrow #5 isn’t really about Supergirl at all, but it still develops some deep character moments and really effective drama out of a simple plot twist, with beautiful art by Everly to pull it all together, earning 4 out of 5 stars overall.  If you’ve ever argued that Kryptonians are too powerful to ever be interestingly this issue may be worth putting on your wish list to see how it can be done and done well.

A story that separates the Kryptonian from her powers, making a challenge for Supergirl that isn't just a matter of Kryptonite or Luthorian scheming. Well-done.