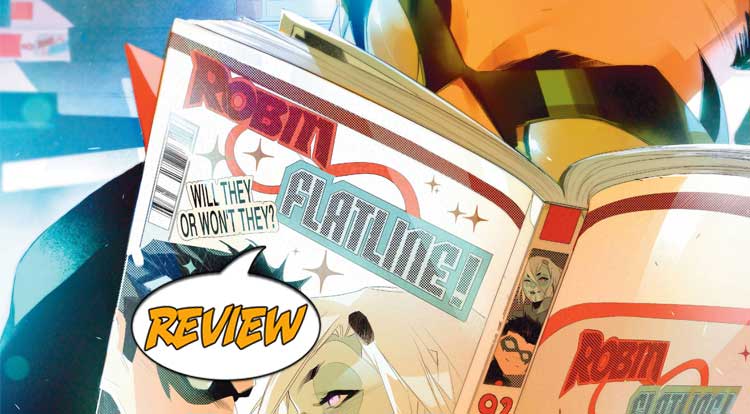 Damian Wayne faces the one opponent he’s never squared off with before: Romance!  Your Major Spoilers review of Robin #7 from DC Comics awaits!

Previously in Robin:  It was the smooch heard ’round the world… and it’s the one thing Damian Wayne DIDN’T see coming his way in the Lazarus Tournament!  As Robin battles for the secrets of eternal life against the deadliest killers on the planet, can he…  Will he…  DARE HE survive… a girlfriend?

A TOURNAMENT OF *LIES*

We pick up in the middle of combat, as Respawn gets in a good shot with his hooked chain (*coughScorpioncough*), leaving the son of Talia bleeding.  Of course, Robin has done a lot of bleeding in his time, and when he gets the upper hand and goes for Respawn’s mask, the mysterious villain balks, backing away and crying that his identity must remain secret until… something.  In his defense, he didn’t get to finish his thought thanks to Damian kicking him to a particularly splattery death on the rocks below.  Confronted by Mother Soul, Damian reveals that he might have gotten distracted enough for Respawn to attack him, but he now knows the truth about the island (the arcane energies of the Lazarus Pit have seeped into its very soil, explaining how would-be champions can die multiple times while on its soil) and about Mother Soul herself…  (I’m not telling you who she is, but it’s a nicely handled reveal that really works in this context.  Seriously, pick up the book!)  His victory moves him to the next phase, where he must face Flatline, the girl who killed him in issue #1… and upon whom he has a pretty sizeable crush.

I don’t think that it’s any surprise to you that Damian survives the Final 4 to go on to the last round against Connor Hawke (the book isn’t called Flatline, after all), but the manner in which it’s (you should excuse the expression) executed is surprising and satisfying.  I especially appreciate the way the romantic and combat parts aren’t really kept apart, meaning that young Master Wayne is following in his father’s footsteps in more ways than one.  Melnikov and Dunbar’s art is likewise interesting, and while I’m not always a fan of their choice of proportions, the big moments are never disappointing.  Respawn’s rather gruesome demise is well-blocked and shocking, while the reveal of Connor Hawke as Damian’s final opponent is a beautiful page, even with a comatose Ravager in the foreground.

In short (or not for long?), Robin #7 is a really good penultimate chapter, revealing the [THING I’M NOT SPOILERING], the truth about the island, some excellent Mortal Kombat-style interactions and strong art to earn 4 out of 5 stars overall.  If I know DC’s marketing department, we’re probably going to see a lot of Flatline going forward, and this series also creates believable dramatic moments for Damian Wayne without entirely reversing his well-earned reputation as a cocky jerk, all the while keeping him a sympathetic and interesting protagonist.  It’s good stuff.

The mystery deepens, and the answers give make sense both as a narrative and to explain the strange video-game nature of the island, adding a new character or two to Robin's Rogue's Gallery and looking good doing it.