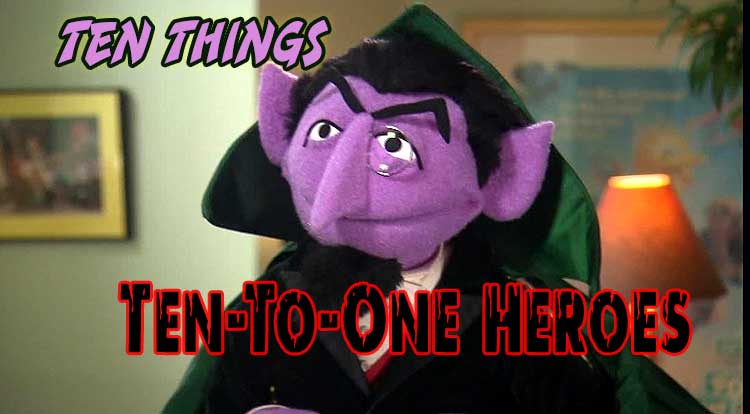 By the rules of Ten Things, every six or seven times, we have to get weird.  Welcome to Ten Things: Ten-To-One Heroes!

Whooshman-Bicarbonate Films, in conjunction with An Amateur Comics Historian and a long-distance dedication to the late Casey Kasem, Presents: After a few years of annoying the Fantastic Four, the last survivor of Poppup (colloquially known as The Impossible Man) got lonely.  To assuage his pain, Impy somehow budded off a female Poppuppian to be his mate and companion, retreating to outer space to find a home and recreate their destroyed race.  They were successful in raising a creche of shape-shifting Poppupian kids, but things got complicated when their babies left home, though Mr. and Mrs. Impy eventually returned to Earth to enroll their son Adolf Impossible in Reed Richards’ academy for young superhumans, The Future Foundation.  Like her husband, The Impossible Woman can change her size, shape and mass in any ways, so long as it’s funny. On Counter-Earth, a world created by Franklin Richards to save the life of his parents in the Fantastic Four and the other heroes of the Marvel Universe, the Super-Adaptoid fought the Avengers at some point and was left inert.  After the heroes returned home, the Adaptoid gained sentience and shifted into the form of a human female, calling herself Amazo-Maxi-Woman.  (The use of the term “Amazo” for the Super-Adaptoid always amused me, given that Amazo is a DC character with all the powers of the Justice League and the Adaptoid is a Marvel character with all the powers of the Avengers.)  She then joined The Remnants, a team of super-heroes assembled to stop Counter-Deadpool from destroying the world. After Larry Trainor’s seeming-death in an explosion, his negative-energy symbiote sought out a new host, inhabiting the body of Russian fighter pilot/spy Valentina Vostok.  Joining a new incarnation of the Doom Patrol, Negative Woman, Val ended up losing the Negative spirit back to Larry, returning to life as a spy and eventually joining Checkmate and being killed off-panel, because she’s a DC supporting character and that’s a recipe for a horrific death of some sort. One of the original members of Lex Luthor’s Infinity Inc. (an offshoot of his Everyman Program), Erika Storn went by Fury.  After leaving Luthor’s company, Erika got a whole new powerset that came with a change in gender in her superhuman form, as well as a less-inhibited personality.  Depending on the writer, it was either a case of comic-book Dissociative Identity Disorder or an early attempt at creating a trans superhero, but either way, Amazing Woman was murdered as part of the 7734 conspiracy.

It’s a sobering reminder that DC editorial likes to kill almost as much as they like new Batman book. On Earth-23, it is Nubia rather than Diana who won the tournament to become the ambassador to man’s world.  Her world also features doppelgangers of Vixen, John Stewart, Steel  and others, including a Superman who is also the President of the United States.  It’s unclear why the majority of Earth-23’s heroes are Black, but A: It doesn’t matter, and B: There’s no story to explain it that will not make me as a reader uncomfortable.  Then again, that might be the fact that I’ve recently been re-reading the early appearances of Legionnaire Tyroc. Able to split into seven different powered selves, each one channeling the power of her chakras, Officer Jenny McCambridge is a very versatile hero.  From the super-speed of her yellow self to her giant-size self, McCambridge is a one-woman police squad unto herself.  This has led to her feeling isolated from her colleagues until she was finally partnered with another officer, Slipstream Phoenix, to whom she admitted her alienation.  She’s often seen in the background of crime scenes, working crowd-control, but had perhaps her biggest collar in taking down rogue speedster, The Sizzler. On Earth-11, where the Amazons of Themiscyra took over the world and imposed Amazon law centuries ago, the majority of the heroes are women.  The Queen of Atlantis (real name as yet unrevealed) is a member of the Justice Guild and is almost ridiculously powerful.  After The Gentry attempted to destroy all realities, she joined Justice Incarnate, a multi-dimensional group of heroes who monitor and respond to threats too large for just once universe to handle. A denizen of Multiversity-era Earth-36, War-Woman is a member of Justice 9, her world’s premier super-team.  Though her real name is unrevealed as of this writing, she is based on Venus from Big Bang Comics, who is herself a pastiche of the Golden Age Wonder Woman.  So, she’s a character designed as a tribute to a character designed as a tribute to the work of Doctor Marston and H.G. Peter, which makes her so meta that I think some of us just ceased to exist due to universal parad Though the comics have shown Kate Bishop amicably sharing the Hawkeye nom de guerre for some years now, her upcoming TV adaptation might muddy the waters somewhat.  I maintain that, if the MCU needs to give her a new alias, the title of her first trade paperback collection, L.A. Woman, would be a great choice.  Detailing Kate’s move to the West Coast to start her new detective agency and live Jim Rockford’s life, it’s not just an excellent story, it’s the one that made Kate the character that she is today. At a time when women were expected to stay home, June Justis successfully made the ranks of the USBI (which is clearly meant to be the FBI, at least in the world of DC Comics).  In her sole appearance, the G-Woman used an almost-precognitive form of intuition (which is to say that the writer didn’t really explain it) to locate and capture a gang of wanted murderers.  When one of them pulled a gun, kicked his tuchus, took it from him, and killed him when he tried to attack her again.  She successfully held the entire gang at bay until reinforcements arrived, making her the hero of the day.  This, it should be noted, was nearly a year before the debut of Superman, which may make June the first female headliner in DC history.

Did you figure out the link?  I hope so!  This week’s topic, Ten-To-One Heroes is all me, but feel free to follow along @MightyKingCobra to suggest a better one!  There’s always more Ten Things madness on Twitter or check out the full Twitter archive here!  As with any set of like items, these aren’t meant to be hard and fast or absolutely complete, but in this case… Yeah.  Yeah, it’s complete.  Either way, the comments section is below for just such an emergency, but, as always: Please, no wagering!