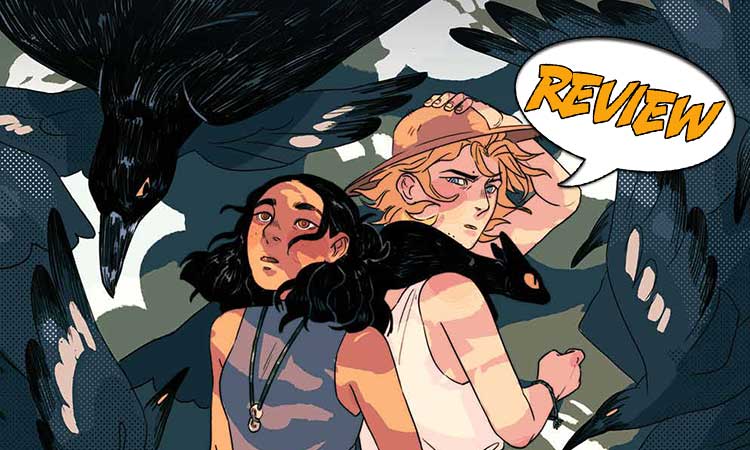 Orla realizes that Mamo has set a trap for her. Can she get away before she is caught, and what will this mean for Jo? Find out in Mamo #4 from BOOM! Studios.

Previously in Mamo: As Jo works with Orla, she asks whether she could teach her magic. Orla admits that when she gave Jo the pendant, she already passed the power on to her, and that the power doesn’t come from the pendant, it comes from the act of sharing. Next, they help a shepherd whose sheep have been acting oddly. Orla finds black moths, like Mamo’s familiar, to be the cause. Then Orla wonders about the olive grove to the north, and Jo suggests talking to Carractus, a local bird. Jo once did a favor for him, and she can speak to them. Jo asks him if they know anything about where Mamo’s bones were buried, and he admits that they scattered them in exchange for some of her power. He has also come to realize that this action has also caused the chaos that threatens all of Haresden.

THE TIES THAT BIND

As Mamo #4 opens, Orla realizes that chasing Mamo’s bones has led them into a trap. Orla is bound to this land, this area, and she is furious. Jo asks her the question that we have too – why would her grandmother want to trap her here? And it is because she never wanted Orla to leave. This is where we see a big difference between the two young women. Jo doesn’t understand why Orla would want to leave her home down, and Orla doesn’t understand why Jo loves it here. Jo realizes that whatever is going on around Haresden, it revolves in part around Orla. Orla concedes she is right, announces it is her responsibility, and sets off to fix it on her own, without any help from Jo.

Jo heads for home alone when Carractus asks where she is going. Jo says that Orla doesn’t need her. Carractus may not know everything about witches, but he knows some things. He asks if Orla told her that specifically and explains about how their power comes from bargaining, from giving before they take. She is bound to Haresden because she was born here. She is bound to her grandmother because Mamo raised her. She may want to leave, but there are ties that bind her here, and she cannot just walk away or else more things will break. He then reminds her of the amulet Orla gave her and Jo realizes that it is made from one of Mamo’s bones. Jo turns around to go find Orla.

Orla makes her way to the olive grove where she talks to Mamo. Now we really understand some of her resentment. She doesn’t want to live the life her grandmother lived, but more than that, she doesn’t want to die alone as Mamo did. She insists that Mamo isn’t stopping her from leaving. But then why is she still here? Then Mamo appears.

She is a stern old woman who tells Orla not to act so surprised. She was calling Mamo, so Mamo came. Orla insists it was Mamo who brought her here. Mamo says she could have unbound herself at any time, but she has let herself be caught. Mamo plays on her fears even more, mocking her for wanting to be Jo’s friend and letting herself get caught up in their friendship. She insists that the villagers really do hate her, and the Mamo was the only one who really loved her. Orla chose to come back, and now she spurns the grandmother who raised her.

Is this really Mamo talking, or is it all of Orla’s inner fears speaking to her?

As the storyline of Mamo #4 takes a darker and more constraining turn, so does the artwork. The olive grove north of Haresden is known as the “end of the world,” and there may be more symbolism to that than the young women have realized yet. They have had their argument and Orla’s anger will not be held back. As if she is already bound to the land itself, the skies turn clouded and the olive grove is subdued and shadowed. I love the gnarled, twisted trunks of the trees, like the gnarled hands of an old woman, surrounding Orla.

I also love how Jo is depicted. All along she has just wanted to help. She is frank with Orla, and doesn’t yet grasp what it means to try to communicate with someone who talks in riddles and half-truths. She is not afraid to confront Orla as she expects that she will be open in return. When Orla walks away instead, Jo is momentarily angry, but mostly she is hurt. This is a conflict she was not expecting, and she needs some time to deal with it. When she confides in Carractus, she also listens to him, and she begins to understand. Then her determination sets in. She may have begun as more innocent, but she is taking the first steps toward acting like the adult in the room.

What is it that urges us to leave home, but also calls us back? Mamo #4 explores themes of growing up and returning home against a broader context of imbalance in the world.

Orla and Jo realize that making connections may lead to complications.