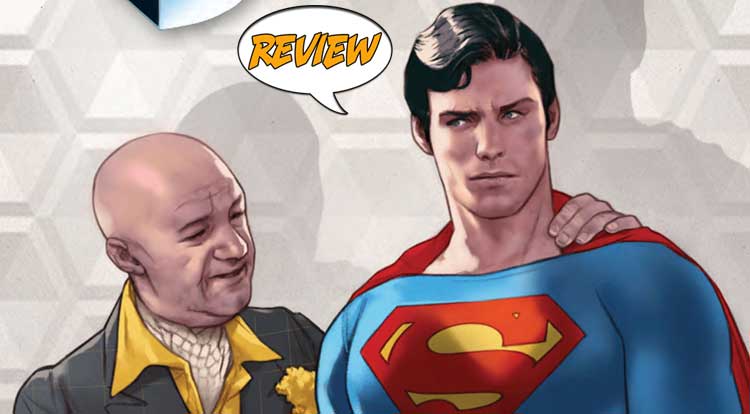 Mistuh Lew-Thore may be out of jail, but the last thing he expected was for Superman to ask him for help.  Your Major Spoilers review of Superman ’78 #2 from DC Comics awaits! Previously in Superman ’78:  After a battle with a rampaging robot, Superman enlists an unlikely ally to crack the code behind who sent it.  He needs an intelligent technological genius, and that can only mean one person: Lex Luthor!

Superman ’78 #2 begins uptown, in the business district of Metropolis, where Lex Luthor has secured an interview with Kord Industries, an up-and-coming tech firm.  He touts his own bonafides, to which the recruiting officer nods politely, and asks him her most important query: “Do you have any cafeteria experience?”  Lex returns home, stewing over the indignity, only to find Superman in his living room with an alien robot head.  After a testy back-and-forth, he agrees to help his old foe with tech support, taking the skull of the Brainiac drone to his lab.  He is able to repair part of the system, only to set off an announcement from Brainiac, warning the human population of an invasive species hiding among their world.  As more drones pour from the sky, Superman leaps into action, while Brainiac continues explaining how it’s all for the best, that the Earth will be safer without the Kryptonian in their midst, and that his robots will keep coming until the alien is captured…

That’s when the Man of Steel surrenders.

First and foremost about this issue: Even though Superman never quite looks like Christopher Reeve in these pages, Torres has absolutely nailed the likeness of Gene Hackman’s Luthor.  That makes the opening sequence hilarious, especially the silent reactions from Lex as he is offered a job as a lunchroom worker.  Venditti has clearly seen the original films more than once, as the voices of Luthor, Lois and Superman are note perfect here, and there are even a number of cool continuity touches to align the somewhat disjointed movies.  Lex’s lab contains part of his ’80s George Perez battle suit, while the Brainiac drones have the skull-head design from that same era.  Superman not only fights with heart and cleverness, he busts out the big cellophane S trick that brought down Non in Superman II, bringing it officially into continuity.

I, for one, couldn’t be happier about that.

BOTTOM LINE: YOU HAD ME AT THE CELLOPHANE S

All in all, Superman ’78 #2 is the kind of labor of love that will make fans of the films happy without alienating comic folks, combining deep cuts of comic and film continuity in the middle of a story that is exciting, amusing and most of all, essentially Superman, with strong art and coloring, making for a well-deserved 4 out of 5 stars overall.  If you’re just looking for a close-ended Superman story, this might be the miniseries for you, but if you’re craving more Reeve/Hackman/Kidder, you won’t be disappointed.

There's a clear attempt to integrate the Superman films into a coherent continuity here, and both the story and the art are up to the task. This is a good'n.