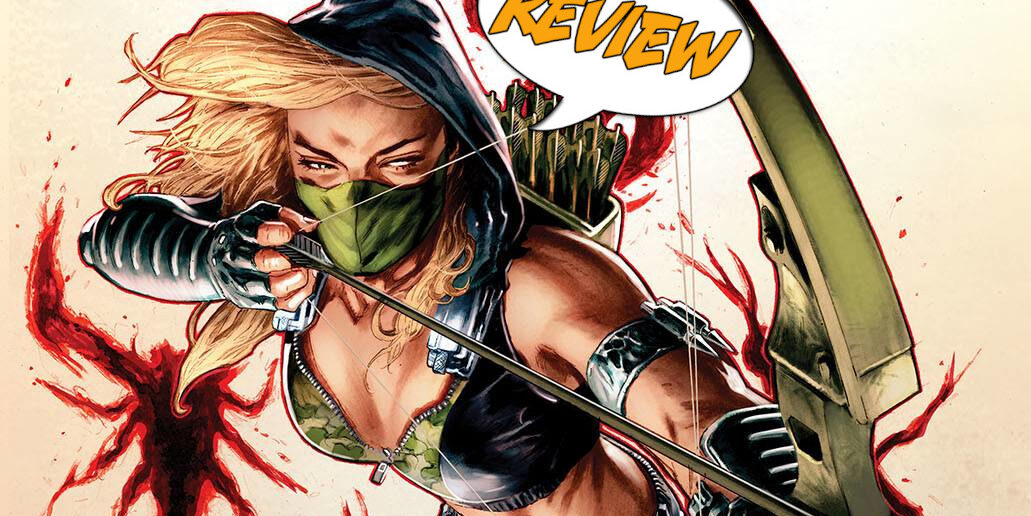 By Christopher Rondeau on September 2, 2021 0 Comments

There is a new threat in the Grimm Universe, and it is testing its strength against Earth’s heroes. Come see if they can survive in Robyn Hood Annual #1 by Zenescope Entertainment! Previously in Robyn Hood: The heroes of the Grimm Universe have fought the Spider Queen, Lord of Flies, King of Serpents, and the Scorpion Queen and triumphed. However, these villains have teamed up to form the SWARM. Robyn Hood must figure out what is going on and stop these villains before it is too late!

Robyn Hood Annual #1 starts with Robyn having a bad dream. A dream where she kills all her hero friends. Waking up in a sweat, she begins to google some of her past battles and realized that there is always a person in the background. She calls Van Helsing for help who tells her that there are things going on, but their phone reception is bad. Robyn instead calls the Black Knight and Belle to see what they know but the trio is attacked by the SWARM. The SWARM take them to the Dark Princess who has already defeated Hercules and sends him, Belle, and the Black Knight into the Abyss. Meanwhile, Robyn is held for a ritual with the Princess and her evil “twin”.

Hercules, Belle, and the Black Knight fight off a swarm of creatures and are saved by the Queen of Hearts, and they prepare to head back to Robyn. But they arrive too late. The Dark Princess used Robyn’s energy to summon the Spider Goddess of the Abyss. The heroes fight but are quickly overwhelmed. The last gambit is that if Robyn had power to summon the creature, maybe she can send it away. Robyn focuses her energy and sends the monster back. As the heroes regroup, the Dark Princess escapes with her SWARM.

To begin, Robyn Hood Annual #1 is a huge comic book. You get 70 pages of content that is action packed and tells a concise story. For me, I don’t think seventy pages is enough. I think the pacing of the story needed to be slower so we can get a real sense of the danger. The heroes are dynamic and engaging but I wanted to see them stop and think a little more instead of being thrown from one stressful situation to another. Without that moment for a deep breath, the book felt like it was almost hyperventilating.

I have liked Robyn Hood since I was introduced to her character. She has a lot of strong personality traits that I think I resonate with. However, her last few stories have always felt like they were preparing her for something bigger that we haven’t gotten yet. This SWARM could be a great villain for the entirety of the Grimm Universe, but I am afraid it isn’t going to be pulled off. With such dynamic characters and a good art style, I wish for more.

Robyn Hood Annual #1 had to deal with a lot of characters doing a lot of things and I applaud Joe Brusha for keeping track of everything so well. This is a solid stand-alone story, but I do admit I wanted just a little more depth. However, I understand that there are page expectations and publishing schedules, so I might be asking for too much. This is a 3.5 out of 5 for me.

Robyn Hood Annual #1 does a great job bringing a cast of characters together to tell this story but there was so much packed into 70 pages that it felt rushed.