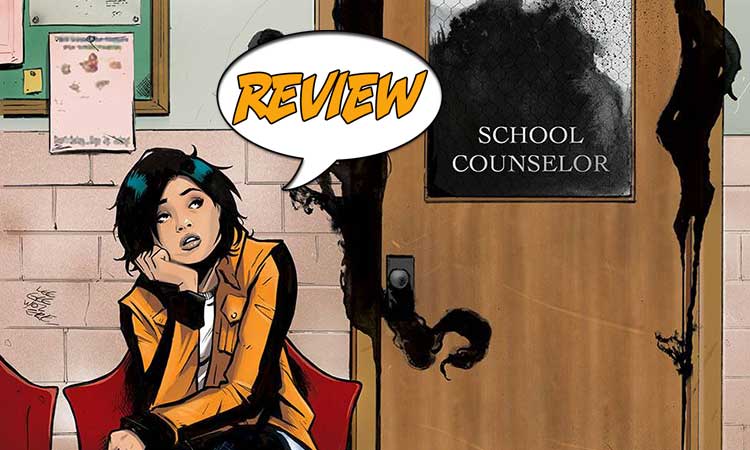 The shadows Zadie fears have started taking on larger, more terrifying forms, all except for her own shadow. But where are they coming from, and why is this happening? Find out in Shadecraft #2 from Image Comics! Previously in Shadecraft: High schooler Zadie Chu is not having a good year. Her family is dealing with the fact that her older brother Ricky has been in a coma for a year. She sees monsters in the shadows. And to top it all off, she had a misunderstanding with one of her friends and kissed him. Then she sees shadows in school, tackles her friend Kate, and this gets caught on video and shared online. Zadie feels like she could die of embarrassment. When she goes to the woods to be alone, the shadows rise up around her like a monster. Then her own shadow appears and tells her to run. She is almost drawn into the ground, until she thinks of lighting things up with her phone’s flashlight. And then she realizes her shadow is actually her brother.

HER SHADOW, OR HER BROTHER?

Zadie had a huge adrenaline rush last time, so in Shadecraft #2 she is lying asleep on her bed among her books. As she hears her parents talking, she starts to wake up. A shadow startles her and she falls out of bed calling her brother’s name. Her parents announce that she is grounded and her phone is being taken away. She, in turn, is okay with this. Her mother asks her about saying Ricky’s name, and Zadie says she had a dream about him. They leave, and her shadow comments that that was weird. Zadie is momentarily startled again, but finally has the chance to ask Ricky what happened.

He says he was driving home and saw a shadow on the road that was a truck with its headlights out. He swerved to avoid it and doesn’t remember anything after that until he overheard Zadie talking to him. Even so, he really didn’t have any voice or strength until Zadie was in danger. Her brother may be back for her, but no one else can see or hear him. And the writing is fun. They’re trying to understand what is happening, but the brother-sister dynamic keeps coming through. For example, Ricky gloats about not having to go to school. But Zadie must, and where she goes, her shadow has no choice but to follow.

School is amusing, at least to us, as Ricky acts obnoxious, shouting out annoying things that only Zadie can hear. She still holds her own. While she talks to him, Josh comes up to talk to her about the other day. With Ricky listening in, Zadie tries to put him off, and they part without anything really explained. Then there is the incident with the girls who filmed her outburst. Now they have stuffed an enormous bouquet in her locker and are filming her again. Zadie figures out this is to improve their ratings. But Ricky steps in and alters the shadow of one of the girls, giving her a large, horse-like behind, which naturally gets caught on video. Sometimes the obnoxious brother can be helpful.

Zadie is called to the new school counselor’s office. Zadie expects that this is because of her fear of shadows and the infamous video. Angela seems kind, and says it seems clear that Zadie is going through some things, and she would like to help her. She has read her file. But Zadie is not completely opening up, especially with Ricky making funny shadow shapes and poking around, until he spots that Angela has a gun in her desk.

Zadie, and obviously Ricky, go home where he sees firsthand how his family are dealing with his body. Then Zadie tells him her suspicions that there may be an answer to what happened to him in the woods near where he crashed. They sneak out of the house, but first they stop at the school to investigate the counselor.

I enjoy that Shadecraft #2 opens with a touch of humor. A bit of lightness is like being able to pause and take a breath for a moment in a horror story. Zadie is sprawled out on her bed, books and phone and clothes all around her, one shoe still on. When she falls out of bed, we see her feet sticking up as she talks to her parents from the floor. I also like how they’re grounding her together, showing her a united front, clearly ready to handle an argument that never happens.

But what is truly interesting are the shadows. Zadie’s shadow sometimes looks like her, but mostly takes on Ricky’s silhouette. And when it looks like him, there are some other effects around him, like his shadow is giving off shadowy smoke. We saw this before in the shadow monsters. And when Ricky remembers Zadie sitting with him, this time we swirling shadows rising up behind her. There are also moments when Ricky takes on a distinctly three-dimensional form which is handy for sneaking around, but also gives him an unearthly appearance.

Shadecraft #2 takes the dramatic start from the first issue and fleshes it out with nuance and intrigue. The blend of mystery and slice of life works well to create a compelling story.

Zadie’s brother Ricky has returned as her shadow.