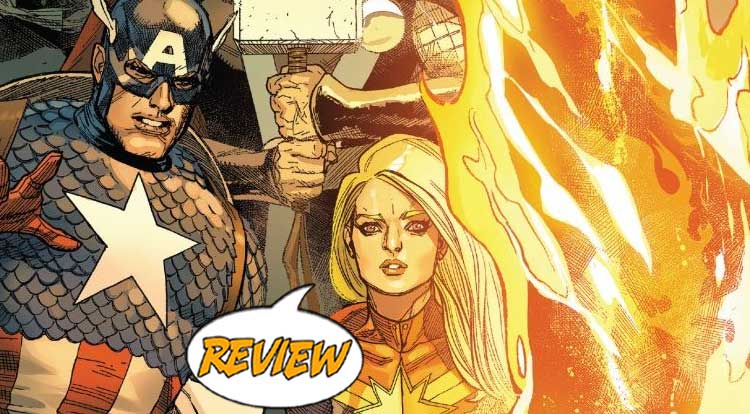 The new Phoenix is chosen.  Will the Marvel Universe survive their wrath?  Your Major Spoilers review of Avengers #44 from Marvel Comics awaits!

Previously in Avengers: It all comes down to this.  The final battle to decide who will wield the awesome cosmic power of the Phoenix Force.  You don’t want to miss… the debut of the all-new Phoenix!

Avengers #44 opens with perhaps the most evenly matched competitors, Captain America and The Black Panther, battling each other while trying to put together a plan.  Cap realizes that T’Challa’s plan is simple: He’s going to become the Phoenix, because he truly believes that their destiny is inextricably tied to the cave paintings he found way back in issue #1.  The ruthlessness of Red Widow tries even Shanna, The She-Devil, while Namor once again pridefully stands against a Hulk, vowing to wield the power of the Phoenix again.  As all three battles rage out of control, the unexpected occurs: Echo rises from the deep, realizing that she just died, but that the Phoenix Force needs someone that has fallen.  She ends each battle, retrieving the portions of her cosmic power one at a time, but taking special care to not merely beat, but utterly humiliate the prideful Sub-Mariner.  As Echo rises, Thor has to deal with the fact that his mother, the Phoenix of 1,000,000 BC is going to be absorbed as well.  She promises to come and find him when the current crisis is over, as she is absorbed by Echo as well…

THERE’S A NEW THUNDERBIRD IN TOWN

The issue’s goose-bump inducing moment, though, comes as she receives a telepathic message from the Moon, a birthday message and warning… from Jean Grey!  That’s one heck of a way to end a very well-done issue, especially as baby Starbrand is visited by a few tiny firebirds.  The players are slowly being assembled, and even though much of this issue is combat, very little of it feels like wasted space.  The battles all feature character moments and dialogue that show Aaron’s take on the iconic heroes of Marvel, while Garron’s art makes everyone look amazing.  The Phoenix-versions of the various combatants are lovely, especially Cap’s, but Echo’s new look is both attractive and perfectly in-character for her.  After the indignities heaped on her back in the New Avengers days, I’m hoping that she might finally get that big top-tier run as one of the big league Avengers.

BOTTOM LINE: A SWERVE THAT WORKS

In short, Avengers #44 does the nearly unthinkable, giving us six heroes in head-to-head matchups, but making the winner NONE of them, artfully pulling off that Dusty finish with attractive art, really impressive digital coloring effects (especially the flames) and making it all feel satisfying, earning 4 out of 5 stars overall.  The next issue promises a big ‘King In Black’ crossover, which I’m less thrilled about, but I’m really psyched to see where The Avengers go from here.

Even with Marvel's slightly spoilery promos, this one is a shocker, and it once again flips the table on Aaron's Avengers, while looking pretty great. But, man, poor Namor...