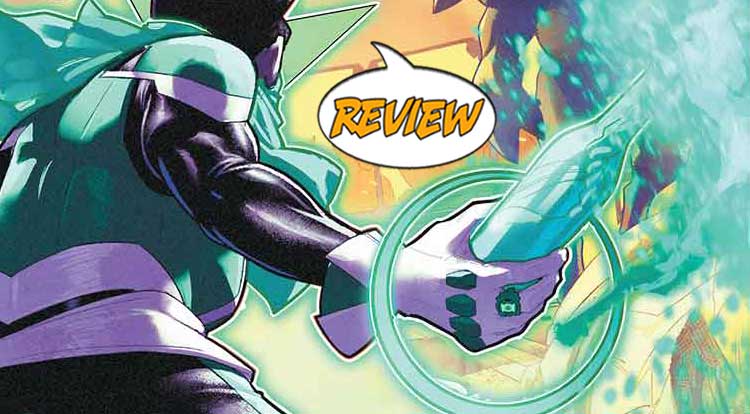 In order to arise from its own ashes, a phoenix first must burn…  Your Major Spoilers review of Far Sector #11 from DC Comics awaits! Previously in Far Sector:  Riots are breaking out across the City Enduring as its citizens realize that there are political shenanigans disrupting their way of life and subverting the will of the people.  To quell this unrest, @BlazeofGlory is threatening to unleash a terrible weapon upon her own people.  Jo has to race against the ticking clock of a Green Lantern ring that is rapidly losing power to bypass the city’s entire defense forces and stop this attack from above.

The City Enduring is rioting while they try to vote for a new way of life, but there’s a bit of political chicanery going on around the referendum.  Green Lantern Jo Mullein has managed to recruit former Counselor Marth to her cause, but before she can capitalize on it,  her opponents take drastic action to offset her possible advantage.  This includes hiring the City’s ancient enemies to attack, crashing the servers and setting the human and AI populations against one another, and just basically lighting everything on fire, metaphorically and otherwise.  The cybernetics already have a difficult time getting to vote, and all this chaos is making it even worse, bringing home the real-world parallels of the story.  As the book ends, Jo is about to go into battle against an alien armada…

…and did I mention she only has 20% ring power left?

This is a remarkable comic book experience.  The fully-painted art is remarkable throughout the issue, and every page of Far Sector #11 has something beautiful to look at, making it one of the books that I read through multiple times in the Guided view, then twice just to bask in the visuals.  Jamal Campbell uses a vivid color palette full of pinks and reds, but still has bright blues and greens where necessary, making for versatility in its colors.  The final half-page splash of Jo taking off into space is particularly attractive, balancing her uniform and ring against the pink/purple City and making a great action shot.  The story is equally complex, with political machinations from multiple sides balanced against personal interactions (including some truly wonderful bits about playing ‘Uno’) and a tiny bit of romance.  It’s the kind of issue that makes me mad that I didn’t jump on issue #1 when it came out, but also now I have a big backlog of things to read as I wait for next issue’s big finale.

BOTTOM LINE: OFF TO SAVE 20 BILLION WITH 20% POWER

With it’s clear parallels to United States political structures fused into a fun, complex story full of machinations and backstabbing, Far Sector #11 is a phenomenal read, especially given how skillful and creative the art is, making for a 4.5 out of 5 star experience.  If you’re not reading ‘Far Sector’, you are absolutely missing out.

Jo's situation gets worse, but every page of it is fascinating and visually amazing, with an ending that makes me want the last chapter right now.