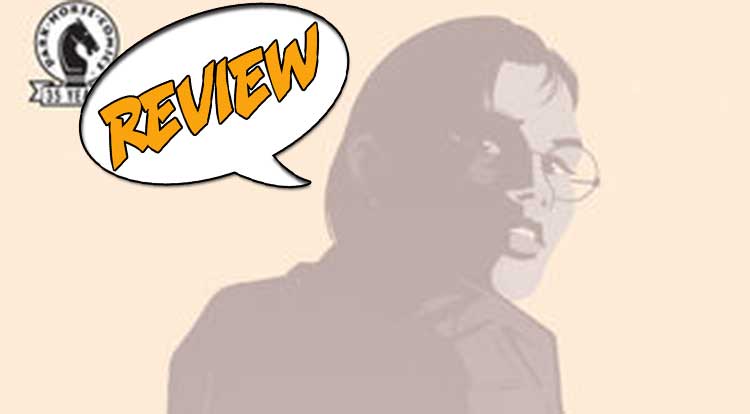 Joe investigates the disappearance of her friend Cormac. But what secrets lie hidden in the heart of Pendermills? Find out in Dead Dog’s Bite #1 from Dark Horse Comics! Previously in Dead Dog’s Bite: In the small town of Pendermills, a young woman (Cormac Guffin) is missing. Her friend Josephine – or Joe – gets more and more concerned as the days pass with no news, and no one seems to care.

A DISAPPEARANCE AND NO ANSWERS

Dead Dog’s Bite #1 has an arresting beginning. The view is the middle of a city intersection, and we watch as a man in a light blue suit climbs out of a manhole. This is our narrator, and this gives the book such a Twilight Zone feel. He’s here to tell us a story, and he non sequiturs into avering that neither he nor anyone he knows has ever been a member of the Community Party. The story does not appear to take place in the 1950’s. And this is not the only time that things seem just a touch odd, but in a good and intriguing way.

Pendermills looks like a small city, but the population is only a bit over two thousand people. We don’t know much about town, and it certainly could be a city in decline. It is a city with eccentric characters. The narrator takes us into the local grocery store/pharmacy and introduces us to Joe. She’s here to pick up her seizure medications. Ferg, the pharmacist is one of the eccentrics. He laughs long at his own jokes, and both of his hands are in casts. He claims the reason for this is a cute story, but we never actually hear it. Joe also picks up some milk as in the dairy aisle, a man painstakingly glues pictures to the milk cartons.

These are pictures of Cormac Guffin, who is missing. As this is revealed, the narrator tells us a story of a young woman who meets a wolf in the woods. The juxtaposition gives a sinister feel to Cormac’s disappearance.

We cut to a vigil for Cormac. The mayor speaks some encouraging platitudes but has no news. He speaks a little like a preacher, but he’s quite a character too. He has bright red hair and a mustache and wears a white suit and cowboy hat with a red shirt. Behind him, half in shadows, is an older lady wearing a dramatic black and white striped dress. This is Old Lady Pendermills. Joe stays to the edge of the audience and talks briefly with the Chief of Police, who has no news for her.

Frustrated, Joe leaves and has a run-in with a young man, Reggie. There is some name-calling until Reggie makes the accusation that Cormac killed herself. Joe digs in her backpack and pulls out a pistol. Then Allen, Cormac’s boyfriend, arrives. Reggie flees. Allen is shocked at the gun – which does turn out to be a water pistol. Judging by Allen’s reaction, this is strange behavior, even for Joe, who now insists that he take her to where he and Mac went the night she disappeared, on her 18th birthday.

This place is basically the local Lover’s Lane. Allen and Mac went up there to just look down over the town. There is a car up there – the occupants speed off when Joe knocks on their window to ask her questions. We also learn that Joe and Mac used to sneak up here as kids to spy on people. Joe is in a funk. Allen goes back to town. The narrator arrives on the scene to close out the book. He looks real to us, but it doesn’t seem like any of the other character can see him.

JUST A TOUCH OF SURREALISM

As I mentioned above, the open of Dead Dog’s Bite #1 grabs your attention. There is enough oddness to it that it draws you in. It’s composed on 9-panel pages. Our view doesn’t change; what changes are the cars passing by and the man in the immaculate light blue suit who lifts open the manhole cover, climbs out, dusts off his suit, carefully replaces the cover, and checks his watch. He seems so incongruous.

There are a lot of interesting things in the art. I love the coloring in the scene after Joe leaves the vigil. It is night, but there is a red cast to the light, and it’s colored in a way that looks somewhat blotchy, as though there is some light fog that catches the light. When Allen arrives, he spots Joe and Reggie in his headlights, and the headlights add a yellow glow. The colors are like fire, or like anger. It’s quite striking.

And then there is the insignia for Pendermills. We first see it in the establishing shot for the story on the welcome sign at the edge of town. You may not realize it at first, but this is a motif that keeps showing up. It’s on the milk carton. It’s on Ferg’s store. It’s on the police chief’s jacket. And I’m pretty sure that Old Lady Pendermills’ dress is striped with the same symbol as well. Is this a company town? What is going on here?

Dead Dog’s Bite strikes the balance between normalcy and a disquieting feeling that something possibly sinister has happened. Joe comes across as someone who is socially awkward and not always likable, but she also seems determined to find out what happened to her friend. This is, quite frankly, a terrific book.

Cormac Guffin goes missing on her 18th birthday – and no one knows why.