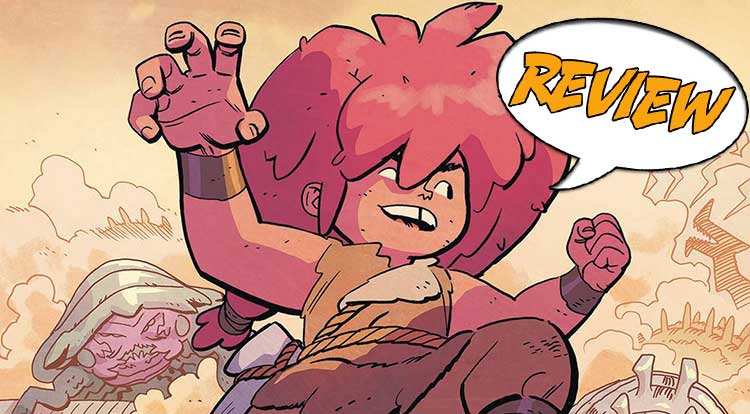 Jonna and the Unpossible Monsters #1 Review

The last day Rainbow saw her sister Jonna was the first day she saw the monsters. How has the world changed since then? Find out in Jonna and the Unpossible Monsters #1 from Oni Press!

JONNA AND THE UNPOSSIBLE MONSTERS #1

Previously in Jonna and the Unpossible Monsters: Rainbow’s sister is missing. The last time she saw her is the first time she saw the monsters – monsters that now roam the planet!

THE TROUBLE WITH LITTLE SISTERS

Jonna and the Unpossible Monsters #1 is set in a lush, green, island world full of small creatures. A human town is built into the craggy hillsides in what looks like a jungle. It is in this jungle that a girl with purple hair, Rainbow, searches for her sister Jonna. Jonna is running through the jungle, across fallen mossy trees, and up vine-covered branches. She leaps from stone to stone. Suddenly, a loud noise rumbles through the forest, shaking the earth itself. Jonna peeks through the branches and sees an enormous creature. “Unpossible!” she exclaims before determinedly running toward it, leaping up. As Rainbow gets close enough to see her, the beast opens its mouth. Rainbow trips, falls, and loses consciousness.

The story cuts to a year later. Did I say this was a lush, green world? Well, it is no more. Rainbow walks down the streets of a muddy, makeshift village. She shows people pictures of her sister. No one has seen Jonna. A child notices the feather she has tucked into her cap – said to be from the last-known living bird. Things have changed considerably.

A kindly old lady, Gramma Pat, sees her and invites her in for some food. It isn’t much, but it’s what she can make, ever since the monsters showed up. Pat has taken her in and encourages her to stay. But Rainbow has feelings that her family is still somewhere outside the camp. A young boy runs in. He has word of a passing traveler who said he saw a kid jumping through the trees. It could be Jonna. Rainbow packs her meager belongings and heads out.

THE DAY THE WORLD CHANGED

Jonna and the Unpossible Monsters #1 is a book of few words. It showcases just how very much can be shown through the art, which is charming. What we know of Jonna, we know from seeing her. She is Rainbow’s little sister, and she would rather play in the woods than obey. Although she is young, we see her running and jumping through trees. She is joyful and completely at home. The opening jungle is full of vine-covered trees, fallen logs with growths of mushrooms, and colorful birds and lizards. The last thing we would expect is monsters – and the one we see looks like it could be a kaiju. I think we must assume that it did not actually eat Jonna, although from what we see, that is a possibility.

After this, it is through the art and the change of scenery that we see the changes in the world. Rainbow wears the same overalls and the same hat, but her face looks weary for someone as young as she is. The colors have shifted from greens to browns. There are hints in people’s belongings that they used to live better, that life wasn’t always in rough, patched tents. But now people own what they are able to carry. What brought the monsters to this world?

BOTTOM LINE: SETTING OUT FOR ADVENTURE

Jonna and the Unpossible Monsters #1 is a quick read but does a remarkable amount of world building. Rainbow is clearly setting out on a version of the Hero’s Journey, and what I like about it is that plainly the entire world changed, which means there are hints of a story beyond finding Rainbow’s missing family.

Jonna and the Unpossible Monsters

Rainbow will never forget the day the monsters appeared – and her little sister vanished!