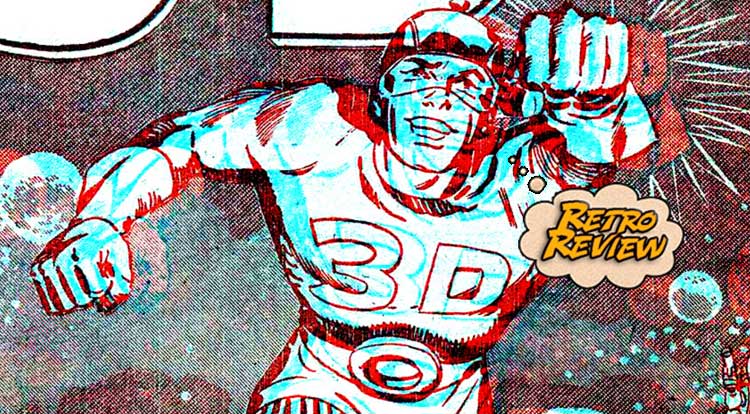 Sixty-seven years ago this month, the creators of Captain America debuted another incredible Captain…  He just wasn’t quite as popular.  Your Major Spoilers (Retro) Review of Captain 3-D #1 awaits! Previously in Captain 3-D:  Though stereoscopic technology has been around since the late 19th century, it became a full-blown social craze in the early 1950s.  Starting with 1952’s ‘Bwana Devil’, 3-D films experienced a boom, but the process of shooting and projecting the film was incredibly time-consuming and required two projectors, which limited both the availability and the length of the films being shown.  Though 3-D movies quickly ran their course, it naturally wasn’t long before comics got in on the game as well. We open in a book shop that is strangely, somehow, owned by a young orphan named Danny Davis.  After a strange man tries to sell him a book of unknown provenance, Danny witnesses him being assassinated by a “gamma gun,” even tackling the assassin to keep the book out of his hands.  Young Danny is puzzled as to what’s so special about this ‘Book of D’, finds a surprise when he opens the pages… …as a full-sized superhero leaps from the pages in full three-dimensional glory! Thanks to Kirby’s powerful art, we get an up-close-and-personal view as Captain 3-D leaps into action and puts the smackdown on the rest of the would-be assassins, leaving them all laying.  When Danny asks why they’re trying to kill him, Captain 3-D advises him to look at them through his special glasses, revealing that they’re not men at all, but strange cat-creatures.  Worse than that, the Captain informs him, they have a singular goal. Having spent thousands of year protecting the world from within the book of D, Captain 3-D is now in Danny’s hands, making him the official guardian of the book of D.  Once we’ve established that a murderous secret race of cat-people were seeking to conquer and dominate the Earth, the book makes the bold choice to completely abandon this premise and send our hero into action against other villains, pitting him against a Phantom Thief who appears and disappears much like Cap himself.  Worried that his new pal is a four-flusher, Danny sets out to investigate, and ends up getting himself captured. Man, that fifties Kirby figure-work is just amazing stuff.  The plotting is a little bit less so, though each of the 10-page stories in Captain 3-D #1 are perfectly fine, as the focus was on the cool three-dimensional gimmick, leaving us with a better than average 3.5 out of 5 stars overall.  This book also has an advantage over many 3-D comics I’ve read, in that it’s still pretty clear and understandable even if you don’t have your glasses handy, making it something of a shame that there was never a second issue. Though some pencils for the never-completed #2 exist and have been published by AC Comics, Captain 3-D hasn’t even gotten a big revival like most of the rest of his contemporaries, and that’s a real shame.

Three fifties-style action pieces, with an interesting gimmick and Kirby's amazing art, make for an interesting (if not entirely memorable) chunk of comics.