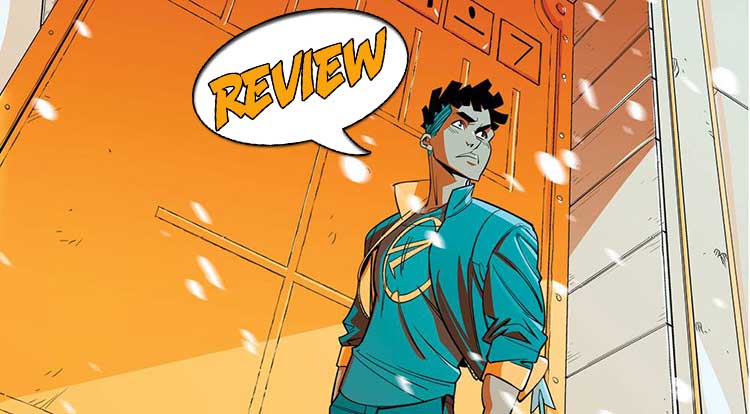 In Seven Secrets #5 from BOOM! Studios, the Order is forced to fall back to a mountain fortress to protect the Secrets. But despite their best efforts, a traitor betrays their intent and a wholesale massacre ensues. Who survives?  Find out in your next mighty Major Spoilers review!

Previously in Seven Secrets: For generations, the Order has protected the Seven Secrets, briefcases containing information that could bring the world undone.  But betrayal from within now threatens their control of these Secrets.  As the Order’s newest member Caspar completes his training, he is thrust into a battle for the very control of humanity and the world…

Seven Secrets #5 isn’t what you’d call the most subtle of books.  It looks and feels like an action thriller, told with all the bombastic fury of an 80s era Bruce Willis movie, but updated to more modern sensibilities with a diverse cast of characters, all armed to the teeth.

The storyline is pretty basic.  An ancient Order (check) guards a number of Secrets (check) who if the bad guys (check) capture, threatens the safety of the world (check).  A brave young fellow (check) recently inducted (check) into the Order, plays a pivotal role (check) in saving the day (not yet, but he will (oh, and check)).

For all my amused cynicism about the tropes littering Seven Secrets #5, it is a really fun read.  There’s a hard charging narrative that’s spun out writer Tom Taylor, that grips you by the throat and never lets up.  It’s also very well paced, with moments of (intense) conversation matched with moments of high drama and action.

Even if the characters feel familiar in their depiction and attitudes, it’s a good kind of familiar.  Part of the power of stories like this is the comfort they bring to the readers.  You know what to expect almost as soon as you’ve opened Seven Secrets #5.  Those of you who have a familiar go to book or game or television series or movie will know what I’m talking about.  There’s a reason The Shawshank Redemption is one of the most popular movies in the world – no matter how familiar you become with it, the themes, the characters, the story line – all feel fresh and exciting every time you sit down to watch it again.

I’M READY FOR MY SHOT

The real heroes of Seven Secrets #5 are artist Danielle Di Nicuolo and colorists Walter Baiamonte and Katia RanalliDi Niculo embraces the wide angle lens with a fervor that brings a huge sense of scale to Seven Secrets #5.  There’s nothing small about the world of Seven Secrets – the repository of its treasures is filled with gold and fossilized dragons and statuary and weaponry.  Muscled characters fill the panels with the sort of imagery that would make anyone blush.  People don’t stand around, they pose instead, all on the brink of bursting into action and violence.  Excellent use during the middle passage of Seven Secrets #5 is made of individual panels summing up a lot of work as the Order prepares to flee to its mountain redoubt.  The escape from a burning plane over the Swiss Alps is worthy of any D-Day invasion movie with its thousands of people storming the beaches of Normandy.  While the coloring is more subtle than the art, it brings an edge of realism to the issue that helps anchor the proceedings in the here and now, and punctures the slightly overblown nature of the characters.

Seven Secrets #5 doesn’t do much to break out of the genre it has so willingly embraced.  It works to a formula that has been successful for decades, sacrificing nuance for crowd pleasing action and one note characters who embrace their tropes with a fanaticism matched only by the bad guys.

With fantastic artwork and a wide, cinematic lens to drink in the action, Seven Secrets #5 is the perfect issue to say farewell to a nightmare 2020. Bright and vivacious, it is littered with stunning set pieces that drive the story forward to an impressive cliffhanger.