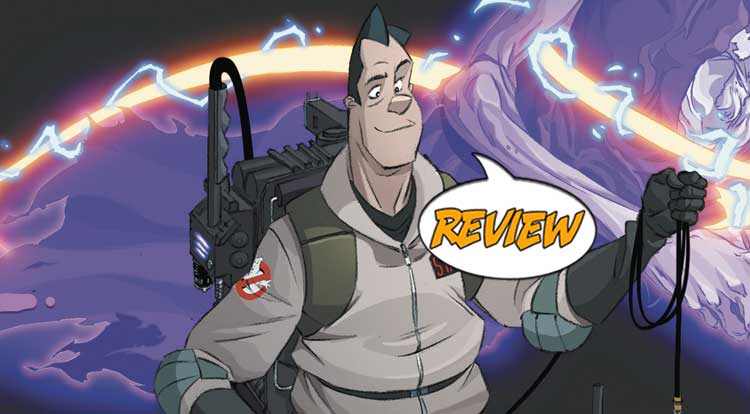 The story behind the story continues, as Ray takes the stage.  Your Major Spoilers review of Ghostbusters: Year One #2 from IDW Publishing awaits! Previously in Ghostbusters:  Being interviewed for a book on the Ghostbusters, Dr. Ray Stantz will relate some of his earlier days working with Venkman and Spengler, as well as tell the tale of their first concrete encounter with a ghost…  and the eventual fate of that spectral librarian that chased them out of the New York Public Library!

Last time, we got an in-depth interview with Winston about his experiences joining the Ghostbusters team. This time around, author Rebecca Morales is interviewing Dr. Raymond Stantz, often called the heart of the Ghostbusters team. We get to see Ray, Peter and Egon as grad students (Egon has a HUGE head of hair, no unlike Harold Ramis in his SCTV days) and how the trio came together as part of a fledgling doctoral program in parapsychology. It’s worth the price of admission on it’s own…. Seriously. After hearing the stories of their first real paranormal encounter, as seen in the library sequence of the original movie, Rebecca asks a remarkably strong follow-up question: What happened to that ghost librarian? Ray explains that, after they were expelled from the university and the company was up and running, they were asked to return to the New York Public Library, as the apparitions have been getting worse. Agreeing to do it for free (and getting in a shot at Venkman negotiating multiple mortgages on his home), Ray and the team seek out the ghost of Eleanor Twitty…

Those who have played the ‘Ghostbusters’ video game may recognize that name, though the circumstances of the encounter are markedly different than shown in that story. This issue shows Ray’s cleverness and his ability to adapt (though, since he’s doing the telling, it’s all through his own perceptions) and explains what happened after “GET HER!” As with the previous issue, the art here is in the house style for IDW’s Ghostbusters book, so there aren’t really any problems with likenesses, but if that cartoony style isn’t to your liking, you might have some issues. It’s nice to see interviews with the minor characters of the movies, like the students Peter was testing in the first act of the film, as well as another appearance from Dana Barrett, and the attention to continuity is admirable. It’s also the biggest problem with the issue, as it’s all about nostalgia, taking us through the back story that leads up to the 1984 movie’s main plot, with lots of cute references (including one to Ghostbusters II.) If you’re not an obsessive fan of the original film, there’s really not a lot to be had in these pages.

That said, it reads quite smoothly and Burnham captures the voice of Ray Stantz quite well, which means that it serves as an entertaining behind-the-scenes story, sort of a DVD extra. Ghostbusters: Year One #2 is a fun, quick read and even though it feels like very little happens, it does the trick and the art is always on-model and consistent, earning 3.5 out of 5 stars overall. As with so many miniseries, I think it’s going to read much better in a collection, but as long as you’re already familiar with these characters, it’s a fun book.

Once again, it's an affable chapter that answers one of those unasked questions in the 'Busters lore, but I really appreciate how well they capture Ray Stantz's voice.