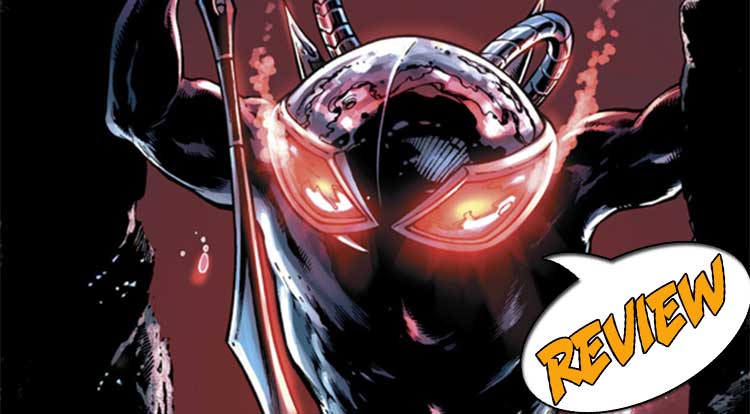 There looks to be plenty of action and drama coming in on the tides with this latest story line. Hop in while you can.

Arthur Curry has returned to Amnesty Bay, and he has brought with him a boatload of gods! As Arthur and his friends try and sort their next steps, old enemies are lurking and important decisions are made. Find out more in Aquaman #50, from DC Comics! Previously in AQUAMAN: Aquaman has been in a state of flux for months. At one point, he was battling ancient evil for the heart of Atlantis, a battle that eventually called for him to leave in the moment of victory. He appeared on a strange island with no memory of who he was, only to regain that memory and show a pantheon of forgotten ocean gods a way to the future. Now he returns to Amnesty Bay amid clamoring reporters and old friends, and has to decide the direction of his future.

THE SEA CASTS A SPELL ON THOSE WHO ROAM

Telling stories is a way of dealing with your personal issues. In an A.A. meeting, Officer Erika Watson shares the story of the original lighthouse keeper and his fate with her fellow A.A. members, she stops mid-sentence. A ship coming into the harbor has grabbed her attention. Arthur Curry, known too much of the world as Aquaman, has returned to Amnesty Bay, and he is not alone. This is news, and treating it as such are a throng of non-local reporters who all wish to get the scoop on Arthur’s return as well as the identity of the mysterious group which has arrived with him. These reporters, not native to the area, even go as far as to question Wonder Woman when she arrives to investigate Arthur’s return and to welcome him. With the young boy Royal Whitmore in tow, Diana finds Arthur in his old lighthouse home, enjoying a meal of cereal as he tries to determine the next best move for him and his friends. Catching up with Arthur, Diana discovers the origin of his companions and their godhood status, something she cannot help but comment on. Gods and mortals seldom get along in close quarters, but Arthur seems to be determined they will stay. More concerning is the fact that Arthur seems reluctant to speak of Mera, or to let her know he has returned. Diana finds out why when Aquaman confides in her that Mera told him she was pregnant at their last encounter, and he proceeded to leave her and Atlantis. Like any good friend, Wonder Woman stops short of calling him an idiot, but makes it clear that he could have handled the situation better, regardless of what was going on around them at the time.

Meanwhile, in Atlantis, Mera is overseeing the rebuilding of the Ninth Tride after the damage it suffered in the recent conflict. While she is displeased with the progress, she also discovers she may be part of the reason there is not more of a push to rebuild. Issues of government, her “delicate” condition, and the return of Arthur give her a full plate to deal with. How she chooses to deal with it, however, shocks more than comforts. Add to that the return of an old enemy and a call from someone in need, and there looks to be many adventures to keep Aquaman in fish and chips for some time to come.

BE CARRIED AWAY ON HER PETULANT WAVES

While there have been many great writers working on Aquaman over the years, it is my opinion that Kelly Sue Deconnick (Pretty Deadly, Captain Marvel) is probably one of the most refreshing and innovative of them. While the previous writer was wonderful and had a hard feel for the fantastical aspect of Atlantis and Aquaman, Deconnick has a firm grasp on the voice of this this Arthur Curry. He feels like a well-blended amalgamation of the traditional and the live action; giving us the best of both worlds, while continuing to stride across new territory and deliver a refreshing new Aquaman who is truly the best of both worlds. The plot lines she has laid down, from the domestic to the eldritch, make me excited to be reading Aquaman once again. I am a little concerned because the plot of the gods living among humans feels a little… worn, but Deconnick has a way of shifting gears on you and delivering great surprises.

On the art front, I have no complaints. The art is well done and there is a good sense of the cinematic and theatric. The splash page with the arrival of Aquaman and the gods on a boat and the descent of Wonder Woman among the reporters are all excellent panels. There are also some great little moments; the look on Mera’s face when she throws her subjects for a loop, the incredulous look of Diana when she hears Arthur’s response to Mera’s pregnancy, all are great character moments and help flesh out the script. That said, could we please make it clearer who does what art? There seems to be a different artist for the storytelling scenes, but because of the neglect to put page credits, I honestly am not sure who exactly should be praised. Between pencils and inks, there are four creators involved, and that does not include the covers, or does it? Despite that, the art is overall solid and good.

This issue is a great place for new readers to jump in and start. Not only does it bring familiar elements of the recent blockbuster movie fully into the storyline, but it also begins to set up some interesting storylines. I’ll be honest, the Year of the Villain tie-in banner may keep some away, and it seems a little inopportune to have such a great starting point be encroached upon by something that feels more than a little forced, but it does solidify the image of Aquaman that DC and Warner Brothers are trying to encourage.  It all heels a little domesticated, but under there is a sense of purpose and a bright future.

Royal intrigue and horrors of the deep make Aquaman #50 a must have for fans of the comic as well as those movie goers who loved the blockbuster version.