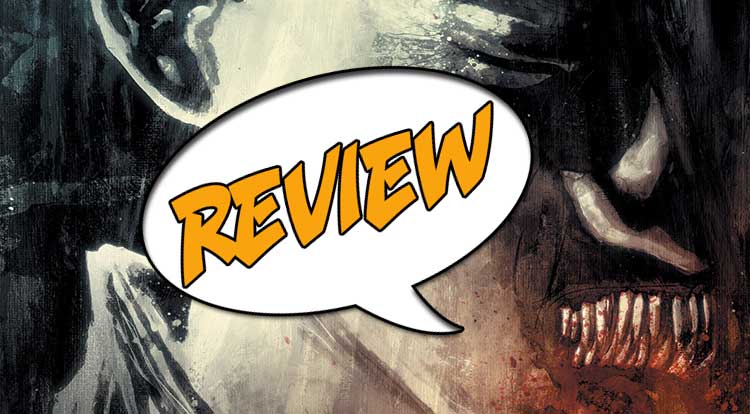 IDW’s reboot of 30 Days of Night ends in this violent final chapter. The survivors of the month-long night, led by Stella, gather to face the vampires who stalked and killed their loved ones in Barrow. Who lives, and who dies will be revealed in this final issue as Steve Niles’ epic retelling concludes!

Previously in 30 Days of Night: Over the course of the preceding five issues, creator Steve Niles has rejigged his original landmark series, updating it for our modern times by…not much, really.  The location is the same, the premise is the same, the characters and their motivations are more or less the same.  So let’s see if the creative team have pulled a rabbit out of the hat with this last issue!

When I picked up 30 Days of Night #6 to review it, I thought to myself, “Hang on, wasn’t there already a series by the same name?  Heck, I remember staying up late one night a decade ago to watch a half decent movie adaptation starring a half decent Australian actress.”  And then it dawned on me – reboot!

I’m not going to rag on this book too much.  After all, Steve Niles did create a very decent update to the vampire mythos with his original run.  And I’m not one of those people who shakes his fist at the sky wondering how someone would take a cherished classic and remake it, because, well, the original is still there and people can make their own minds up anyway.

BLEEDING ON THE CANVAS

The moody and vivid cover artwork is the best thing about 30 Days of Night #6.  It grips you as your eyes shift from the light on the left to the vampire’s bloody red maw.  Inside the issue, however, the art is much more prosaic.  A good number of the panels have characters standing around, emoting and declaiming at each other.  When the violence breaks out, it looks like a lot of bodies flinging themselves at each other, with no real sense of where everyone is in relation to each other on the battlefield.

I think most of the problem I had with the interior art is it is snowing.  On every single panel.  As a nod to naturalism, it gets points, but artist Kowalski’s work is undone by the way those painstakingly drawn tiny white blobs mess up the pages.

The majority of 30 Days of Night #6 is one long, very bloody, very visceral open-air brawl between the vampiric horde, and those left alive in Barrow.  Because of this, there isn’t much room for good writing or characterization, unless you’re in it for the one-liners that fall flat, more often than not.  There are a couple of good moments between Eben and Stella near the end, but it is far too little, too late to save the issue.

In fact, it all feels pretty inconsequential.  There’s no sense of tragedy, no sense of loss, just a story limping to a conclusion.  Sure, the final page is evocative enough, as vampire Eben leads the surviving vampires into the sunrise, but that’s about it really.  If you invested time and money into the earlier books, chances are you might feel short-changed with the bloodless ending.

BOTTOM LINE:  FOR VEGANS ONLY

There’s nothing inherently wrong with going back to the source material and recasting it for a new audience.  Heck, popular culture these does sometimes feels like a reheated version of the past.  But if you’re going to go back to the well, you need to come up with something that engages a new audience as much as they did with the old.  30 Days of Night #6 sadly doesn’t succeed as much as it would’ve liked.

That said, if this reboot introduces the franchise to a whole new audience, and indeed, brings a whole new audience to the earlier version, then well done to the publishers and Steve Niles.  But in reviewing this particular issue, I saw very little to entertain the reader.  Again, if you enjoyed it, I’m very pleased for you.  And if you didn’t, I would recommend you go back and sink your teeth (groan) into the source material.

Steve Niles concludes this reboot of his landmark series from 15 years ago with a no holds barred, stand ‘em up and knock ‘em down issue length fight to the death!