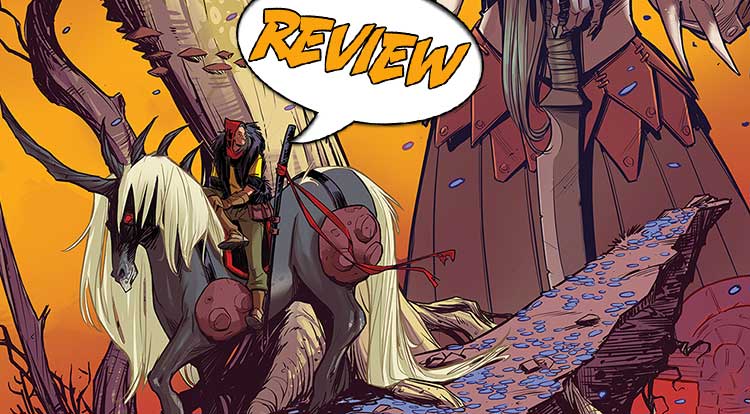 What happens when the magic that defines a high fantasy world goes away in an apocalypse that changes everything? Coda focuses on Hum and his journey through the shredded remnants of that world, as his quest to save his wife continues in Coda #2! Previously in Coda: Our hero, Hum, travels through the devastation wrought by the Quench – the magical apocalypse that sent the magic away  – in search of a means to wrest his wife back from the demons holding her captive.  A near fatal encounter with an executioner’s axe at the end of issue 1 turns out rather well, leading Hum to find a wizardly survivor, and his tempestuous daughter, Notch!

IT’S A KIND OF MAGIC

It may be his British heritage running through his veins, of a grand history and empire reduced to a tiny island off the coast of Europe, which informs writer Simon Spurrier’s approach to Coda #2.  Whereas an American writer might have structured a redemptive story around bringing magic back, Coda, under Spurrier’s direction, is a tart examination of people making do with what little scraps of glory remain to them.

Coda #2 continues the examination of a world that’s gone to hell in a hand-basket.  The landscape, as vividly rendered by artist Matias Bergara, is chaotic, with the ruins of the old world still visible amidst the swirl of what came after.  There are no fixed points, no sense of anything normal anymore.  The survivors grasp at whatever shreds of magic remain, leading to the capture of a creature known as a Ylf, whose very flesh is magic.  As they quickly discover, that flesh grows back, leading to some rather dark moments.

Hum, at this point in the story, is a largely passive character.  Much of Coda #2 is told by way of diary entries addressed to the wife he hopes to free from her demonic jailers.  For that reason, a lot of the action happens to or around Hum, which makes the overall issue less impactful that it could otherwise have been.  Instead, most of the vigor of the book comes from his encounter with Notch, a bandit who has to make do in a world gone badly awry.  Spurrier invests her with plenty of bravado and a wicked wit, which will no doubt enliven future issues in this series.

WATCH THEM PULL A RABBIT OUT OF THEIR HATS

Bergara’s art and colorist Michael Doig are the real heroes of Coda #2.  The book is more cartoonish than you might expect, but that style matches the upheaval wrought on the world.  The proportions of buildings and characters are off, giving a sense of the damage done during the Quench.  Clouds boil in the background, against rust-colored skies, and vast ruins that give a sense of melancholy that only art can convey.

While I enjoyed Coda #2, I can see others maybe not so positive.  The artwork does lean to the cartoonish, which might be a barrier to those expecting images matching the mood of the story.  The writing is top-notch, with Spurrier crafting a world populated by people coming to terms with the loss of magic in their own, often violent, ways.

Hum’s passivity allows the reader to better understand the world through his eyes without his commentary affecting their view.  Notch brings the action and decisiveness Hum lacks.  Her inclusion in the story bodes well for the future.  I say if you’ve read this far in the series, you may as well stick with it as there are bound to be more revelations in future for the dedicated reader.

Simon Spurrier continues to weave a melancholy tale of magic lost and a world teetering on the edge in Coda #2.