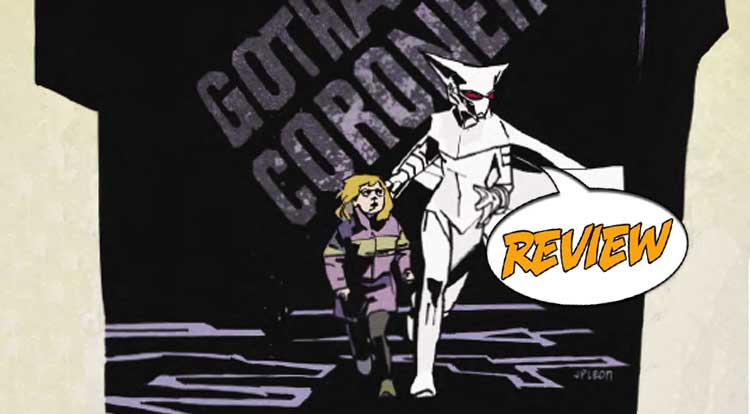 Another day, another mysterious murder in Gotham City… Previously in Mother Panic: “A life Mother Panic once saved is again struck by tragedy, causing her to take a deeper look at her mission of revenge and her role in Gotham City. And with the shadow of the Bat looming ever closer, she may not have much time to decide where she stands!”

THE OTHER PART OF GOTHAM CITY

We open in a dark parking garage, as a young couple and their child return to the car.  As often happens in Gotham, a costumed… thing arrives on the scene, this one wearing what seems to be a body bag and carrying a pair of high-caliber pistols.  A few seconds later, and we have a familiar scene for this town: a child kneeling next to her dead parents.  Elsewhere, Violet Paige, the vigilante known as Mother Panic, is interrogating a goon when she suddenly feels shooting pains through her cyborg body.  Returning to her base, we discover that her cybernetics seem to be failing, but when she discovers that the newly orphaned girl from the open is a child she previously saved, Mother Panic takes off into the night.  There’s a brief encounter with what may be Batman (since all we see is the tip of scalloped cape, it could just as easily be Batwoman), what seem to be flashbacks to her past and an awkward hug, all leading to a truly disturbing final page…

John Paul Leon’s art in this issue is amazing from top to bottom, with a number of moments that took my breath away.  His vision of Gotham is dirty, grey, foreboding and really impressive, the kind of thing that we don’t see nearly enough in the actual Batman titles, and the main character’s design is stark and distinctive.  They say that you can tell a good character just by her profile, and Mother Panic fits the bill.  Having missed the first issues of this book, I was thrown right into the middle of Jody Hauser’s ongoing story, but I wasn’t lost or in any way confused by the events herein contained.  In fact, even though this is my first interaction with this cast, everyone’s voice comes through clearly and the plotting is first-rate.  It is weird to have characters clearly set in the DCU throwing the proverbial f-bomb at this rate, but even that doesn’t throw too big of a wrench into the works…

THE BOTTOM LINE: THE F-BOMBS *ARE* UNNERVING

Reminding me of Batwoman’s first run in ‘Detective Comics’ as much as anything else, Mother Panic #7 feels very different from the other Young Animal titles, but still holds up the same level of quality and care, with utterly gorgeous art throughout and a strong story that I want to know more about, earning a better than average 4.5 out of 5 stars overall.  I’m not always a major proponent of the urban vigilante motif, but this one is engaging and well-crafted, and I’ll be back for more next issue…

Well-drawn, exciting and engaging, with a main character that's distinct both visually and in her actions and dialogue.