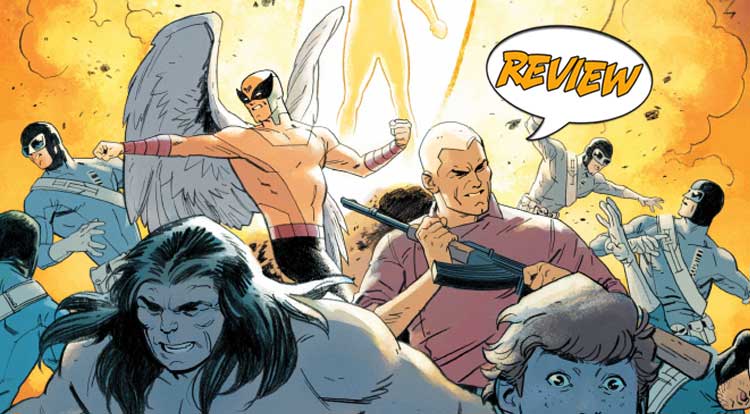 The very nature of time and space are being twisted by forces from beyond space, and now more heroes join the battle for the future!  Your Major Spoilers review of Future Quest #4 awaits!

Previously in Future Quest: In deep space, a monstrous creature known as Omnikron may have destroyed Space Ghost and the Herculoids, warping both time and space to make its way to Earth.  Crashing in the Everglades, the creature has had run-ins with Jonny Quest and his family (especially his ever-capable bodyguard Race Bannon) as well as Ray Randall, the secret agent also known as Birdman.  Discovering the crashed Phantom Cruiser, Race, Birdman and company were able to save a survivor of the crash, a girl in an unusual costume.  Unbeknownst to them, though, another survivor has been taken into the custody of the nefarious Doctor Zin!

This issue opens with a bang, 45,000 years in the distant past, as Omnikron once again menaces a hero familiar to fans of the Hanna-Barbera action universe: The Mighty Mightor, the caveman superhero!  (The first one, Captain Caveman comes later…)  The implication that Mightor’s power-source IS Omnikron is the first stunning moment of the story, with Mightor’s seeming defeat coming as a second.  In the present day, the Quest Team, Deva Sumadi and Birdman nurse the costumed girl back to health.  The trauma of the crash has left her unable to remember even her name, leaving her monkey sidekick screaming in frustration, unable to talk.  He can, however, write, and even draws a picture telling her that her name is Jan and his is Blip, making him one smart Capuchin.  Unfortunately, the team doesn’t realize they’re being tracked by Jezebel Jade, who sends a time-lost tyrannosaur to attack them (and also leading to the debut of Dino Boy and his Cro-magnon partner Ugh) while Dr. Zin takes considerably worse care of Jan’s twin brother Jace…

There are actually two backup tales this issue, one explaining how Zin managed to take control of F.E.A.R., the other giving us the first appearance of Buzz Conroy and Frankenstein, Jr.  That story actually ties together the back stories of the Conroy and Quest families in a clever (but perfectly rational and believable) fashion, even explaining Frankie’s cartoonish design with a clever in-story rationale: Buzz himself designed the robot as a child, and his mother, a genius roboticist, built him to help deal with the loss of her husband.  There are several other important bits of plot in the issue, but my favorite are the small touches: Deva trying to call on “other agents”, only to find The Impossibles in concert; Dino Boy receiving the last name of ‘Messick’ in honor of H-B’s legendary voice actor Don; and Jan’s incredibly sweet response to Blip helping her regain her memory.  It’s an issue full to bursting with characters and events, but never feels over-crowded, and Parker’s achievement in believably stitching together these varied continuities is impressive.

There are multiple artists at play in this issue, but the consistency of the production smooths over any transitions beautifully, and every page of the issue is lovely to behold.  The sequence of Mightor in action is particularly lovely, but I may be the only fan of stone-age Space Ghost, so I’m a bit biased.  Future Quest #4 is another towering achievement, a love-letter to the characters, creators and even voice actors of class H-B properties, and I hope that it’s building to something that makes it all resonate, but even if it comes apart at the seams, this issue is worth the ride, earning 4.5 out of 5 stars overall.  If the hints that Deva is the fourth member of The Impossibles seen in promotional material are fulfilled, this will officially be the best comic book series of 2016, so go read it already!

Back on track, with some truly wonderful world-building and a LOT of important plot developments...