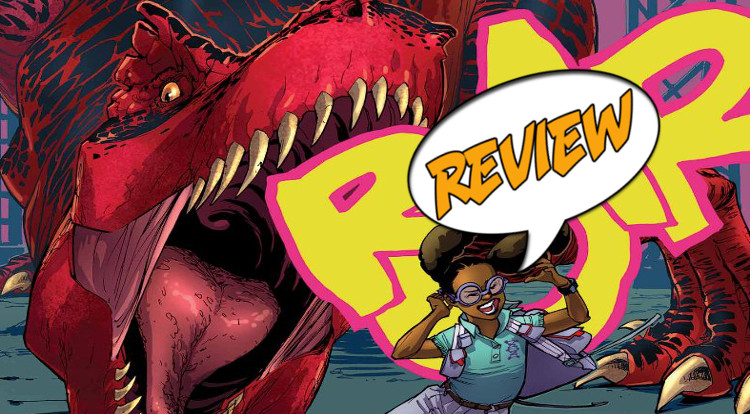 Previously in Moon Girl and Devil Dinosaur:   Lunella is an incredibly intelligent girl looking to find some way to get rid of the Inhuman gene inside her.  Luckily, she found the Omni Wave Projector, which just happened to open a time portal that brought through angry cavemen called Killer Folk and the big mean red machine himself…Devil Dinosaur!  Now Lunella has been kidnapped by the Killer Folk because it seems that they want the Omni Wave Projector too.

TRUE FUN FOR ALL

I fell in love with Moon Girl and Devil Dinosaur almost instantly.  Once I had finished reading issue one I realized it is a comic that is truly all ages, while never pandering or explicitly setting out to write for a young audience.  That fun and free-spirited feeling has continued all the way through to issue three and the book is still going strong.  I love that each issue’s opening page has a quote from a famous scientist.  This one is particularly exceptional, by Mr. Neil deGrasse Tyson: “Kids should be allowed to break stuff more often.  That’s a consequence of exploration.  Exploration is what you do when you don’t know what you’re doing.”  The issue continues to strengthen the relationship between Lunella and Devil Dinosaur as he helps her escape from the Killer Folk, while also losing the Omni Wave Projector in the process.  I like that Lunella wants to “cure” herself of the Inhuman gene and think that it’s a unique and different motivation for the character.  It also allows Brandon Montclare and Amy Reeder to write great scenes such as Lunella talking with her parents as they tell her that her extracurricular activities aren’t “normal”.  It’s a rather strong moment considering normal is all Lunella wants to be.  There are other enjoyable moments like Devil Dinosaur rescuing Lunella’s classmates from a fire.  Even though parts feel far fetched, like Lunella having a whole laboratory underneath the school, it’s hard to hold it at fault too much.  It is a comic with a giant red dinosaur after all.  In the end, the whole issue remained a blast and I can’t wait for more.

Natacha Bustos’  artwork is more, for lack of a better term, simplistic.  That’s not a bad thing at all but is noteworthy as it reminds me more of the work I’ve seen in Marvel’s all ages line.  Her strength definitely lies in her illustrations of Devil Dinosaur.  She’s able to give him a variety of expressions and it’s never hard to know what the big guy is thinking or feeling.  Bustos also does some great panel layouts and designs, particularly the action scene at the beginning.  Some of my problems with the art also lie with the coloring.  It appears to lack depth at times and can make the book look flat.  It’s nothing close to a deal breaker but I would like to see a title like this have the art as top-notch as possible.

BOTTOM LINE:  ANOTHER BOOK YOU SHOULD BE READING

Moon Girl and Devil Dinosaur #3 is a great, fun book for readers of all ages without pandering to young readers. It's got some good art and, of course dinosaurs.