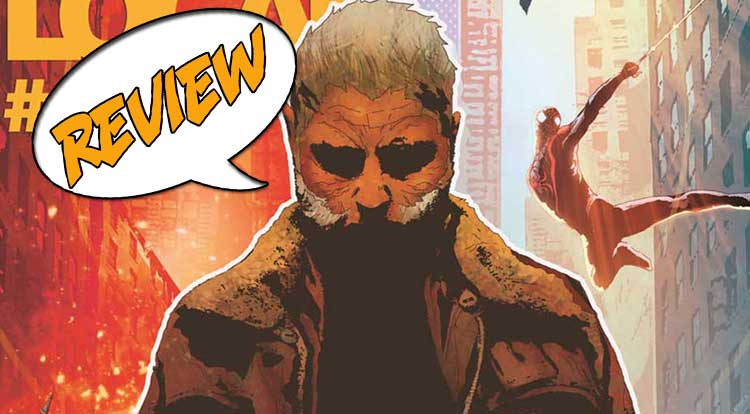 Old Man Logan is used to the harsh wasteland of the country that was once America. Now, in the present day before it all went wrong, he believes he has another chance to save the day. Can he be successful? Find out in you Major Spoilers review of Old Man Logan #1! Previously in Old Man Logan: Some time after his confrontation with the Hulks, Logan left his plane of Battle World and began a trek across many different domains. At the end of it all, he awoke in a strange world where the villains had not yet won.

In 50 years from any given point in Marvel’s continuity, most of the heroes are dead. One of the few left is Wolverine, or more aptly, Old Man Logan, who is looking to set things right. After the event of Secret Wars, in which Logan wandered many different parts of Battle World, our hero awakens in an alley in the current Marvel Universe. There is still time to prevent the villain uprising, and so he sets out on a bloody mission to take down those responsible for the dark future to come and his personal ills. While the Old Man Logan story from 2009 is a good read, it is not necessary reading for this book. Newcomers should not feel shy as this being their entry point in to the character, and they will likely not feel so bogged down by the extra exposition that explains what came before. I had read the Secret Wars OML book, but I had not read the original entry until after this first issue. I did not struggle to get what was going on. You may be a bit lost in some of the finer details, but those will likely get fleshed out more in the books to come.

Jeff Lemire is currently writing Old Man Logan in two separate books: here and in Extraordinary X-Men. Old Man Logan proper seems to take place before what’s going on in EX-Men, so his revenge mission may be over before it started. Given that his targets are Bruce Banner and Mysterio (both missing/presumed dead), and the Red Skull (who is… somewhere), that may have been a given anyway. Regardless of wacky comics continuity, the story feels personal and is quick to get to the point. Since I don’t read X-Men books on the regular, I didn’t know Old Man Logan was bouncing around other places, and I was happy to buy in here. There is a strong sense of direction and focus that was severely lacking in Bendis’ take on the character during Secret Wars. Within one issue, we learn who this character is, what he wants, and he’s already on his way to achieving it. Lemire also manages to casually create, and kill, a minor villain in one book, and he did it so convincingly that I assumed that the character had a pre-established history. Aside from his thirst for blood, I really want this Logan to run in to the hero friends he lost, and see their reaction to this animal, given that more recent versions of Logan have been a bit softer. Probably the most interesting thing in this book is the implication that regular Logan will return within the near future. While I don’t think anyone actually expects Logan to never return, we haven’t gotten any indication of a revival. I don’t know if we can consider this a hint, but it did stand out to me.

GRIM AND GRIT OF REVENGE

Just like Lemire, Andrea Sorrentino’s name on a book is enough to get me to give it a chance. With Marcelo Maiolo on colors, we have the amazing Green Arrow team all back together, and they aren’t missing a beat. Sorrentino’s art is highly stylized, blending unique panel and sound effect layouts to do stuff that no one else is doing. You can get a sense that he works closely with his colorist to create the right atmosphere, and 95% of the time it works. There are some moments, like when Logan is supposed to be in the big and bright Time Square, where the aesthetic feels a little wrong, but then we get their version of the Wasteland from the original story, and all is forgiven. Given that we’re dealing with a story of revenge with a wild and violent hero, you want things to be a bit grittier and darker, and these two bring it. There is a splash page early on that van be described as nothing else but Sorrentino. It is expertly crafted, full of details, and a visual treat that acts as exposition of its own. It is rivaled only by another splash later that is homage to Batman that he has made feel wholly Wolverine.

THE BOTTOM LINE: THIS TEAM STILL HAS IT

This is a really tricky book, and in the hands of a lesser team, it would not be pulled off quite this well. Lemire has taken a character that Bendis dragged around and has given him new legs to stand on, while Sorrentino and Maiolo give strong visuals and brutality when needed. This character might not have permanent staying power, but as long as there is a story this strong to hold him up, then he is welcome to stick around. I hope we get a revival of young Logan before Old Man Logan disappears, because an interaction, a compare and contrast of the two, would be a delight for all fans. Mark Millar and Steve McNiven gave us Old Man Logan, but Lemire and Sorrentino have given us a finely aged Wolverine.

Quick to the point and not afraid to show its claws, this book is a must for Wolverine fans.