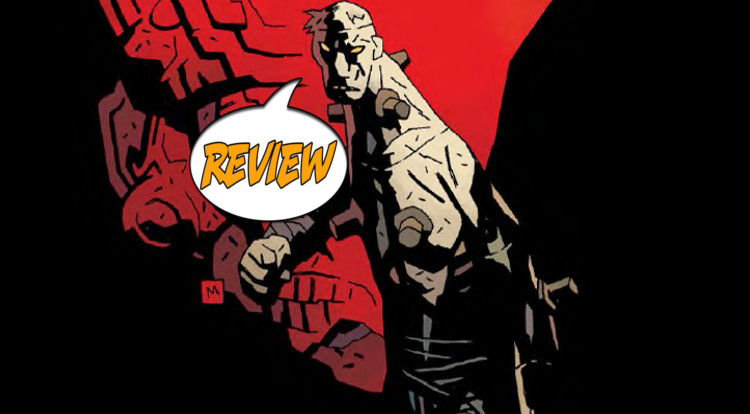 Frankenstein Underground #1 expands out the Hellboy universe by focusing on a character from classic literature in search of his humanity.

Mike Mignola makes a very strong start with Frankenstein Underground #1. He explores the vast history of the character from his literary beginnings through a variety of mysticisms that have been popular throughout his work. Mayan mythology plays a big part in this issue in particular and it both illuminates the character of Frankenstein’s creature and throws a light on the type of forces he may be up against in the coming issues.

The question of life and its non-biological creation weighs heavily on Frankenstein Underground #1. Mayan mythology is well known for its human sacrifice and stories of resurrection and Mignola places an ally tied up in its threads for Frankenstein’s creature in the form of an elderly priestess more interested in seeing to his core without the use of his eyes than running from whatever outward image he presents. True, it’s a plot point derived directly from Mary Shelley’s classic tale, but it plays well in this issue and forges a fast bond between two outsider characters often spurned by the forces surrounding them.

The elderly priestess in Frankenstein Underground #1 also steps easily into a maternal role in her, admittedly brief, relationship with the creature. Her age is suggestive of wisdom while her gender ingratiates trust and an emotional connection. Mignola plays on Frankenstein’s creature as a lost child very much in this issue.

The complicating facts come in the form of a Frenchman named Fabre and his panoply of minions that are in pursuit of the titular character of Frankenstein Underground #1. Like any good villain he’s a bit on the moustache twirling side with machinations stretching into and beyond resurrection, making Frankenstein’s creature the holy grail to unlock the realization of his plans. One has to wonder what Mignola and Fabre have in mind for the diverse cast of creatures already within his employ once they’ve brought the creature securely back.

Frankenstein Underground #1 does not end on a happy note, no. Mignola leaves readers with a death – a sudden death at that – that renders Frankenstein’s creature frustrated and shouting to the heavens. In this incarnation he addresses an entirely different sect of Gods than he did in his first literary appearance, but once again the parallel is clear. This would also seem to be Mignola indicating the scale of storytelling he has planned for this miniseries.

Frankenstein Underground #1 is a very strong first issue that honours the material it is derivative of, while at the same time cementing it firmly in Mignola’s style and the universe he has been constructing. It is dramatic and arresting and it reads pretty quickly.

Ben Stenbeck does art duty on Frankenstein Underground #1 and the result is the issue looking a lot like Hellboy. He does an excellent job, the angles are sharp, the magical and inhuman aspects are highlighted in his exaggerated linework and it definitely feels like universe building.

However, I can’t help but with Frankenstein Underground #1 had a little of its own flair, something visually to mark it as truly unique. The narrative is so strong and compelling that the art falls a little flat in its wake.

There isn’t much by way of backgrounds in Frankenstein Underground #1, a lot of black layered there, much like in Hellboy. When readers do catch a glimpse of Stenbeck’s drawing of an ancient pyramid or temple it I breath taking in its execution.

Frankenstein Underground #1 is such a cool idea and promises to make for a compelling miniseries. It’s definitely worth picking up, especially for fans of Mignola’s other titles.

Frankenstein Underground #1 has a really interesting first issue filled with mysticism and the questions of life and death. It expands Mignola's Hellboy universe and looks exactly like it.