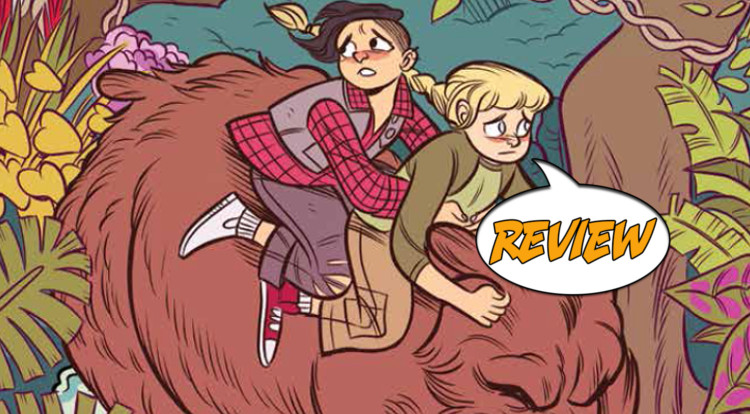 Lumberjanes #12 has Mal and Molly do some hardcore problem solving with the Bear Woman in order to reclaim her glasses. Previously in Lumberjanes #11: Mal and Molly pal around with the Bear Woman and not a lot happened.

In the previous issue not a lot was going on and in Lumberjanes #12 Noelle Stevenson and Shannon Watters have a lot going on. Mal and Molly get to do some serious adventuring with the Bear Woman that puts their skills as lumerjanes to the test, while being allowed a moment of true intimacy and soul bearing amidst all the madness that balances the emotions of the issue very nicely.

Pretty early on in the pages of Lumberjanes #12 Stevenson and Watters give Mal the chance to lay out their plan of action and that’s a truly great moment. In the first arc of the Lumberjanes series Mal displays a lot of self-doubt and to be able to see her really come into her own as a leader and a strategist, no less, is awesome. Likewise, Molly gets the chance to open up emotionally about her own self-doubts and how considering herself in relation to Mal gives her a lot of strength.

The moments of self-discovery in a comic book series that deals with pubescent girls are very rewarding and that is only because the writing team treats them with the gravitas that they deserve. Lumberjanes #12 never comes across as forced or pandering in these quiet moments, they just feel really honest and they offer a compelling literary foil to plot points like Mal and Molly catching a bespectacled dinosaur in a net.

Although, that in mind, the bespectacled dinosaur is easily the cutest thing in Lumberjanes #12.

The b-plot of Lumberjanes #12 of course picks up with April, Jo and Ripley on their never-ending quest to earn a lame merit badge. Their success is definitely questionable, even by the end of the issue, but April in particular learns an important lesson about the true value of work. April in and of herself is a compelling character because she’s the most physically feminine of the entire cast, yet the most competitive and it takes Jo, the strong        quiet type, to reign her in while at the same time setting her free to truly enjoy everything taking place.

Toward the end of Lumberjanes #12 the entire group of leading ladies come together to trade stories, share merit badges around and make promises of adventures to come. It’s a sweet ending to be sure, although much like the ending to the last arc, just a touch underwhelming. The ending also feels a bit abrupt given the long form storytelling that was going on in the first arc and this most recent one wrapping up in three issues. It’s not bad, though not wholly satisfying.

Carolyn Nowak has been on art for this most recent arc and rounds out the arc in the pages of Lumberjanes #12. Her art is charmingly sweet and slightly truer to life than readers may suspect for the crazy nature of the narrative being told. Everything from the girls, the Bear Woman and the variety of raptors that we come across are adorable – even at their most threatening. This in no way detracts from the story.

There are a lot of sneaky action scenes that take place in Lumberjanes #12 and Nowak does a great job at moving character dynamically across the panel in the least amount of time possible. She handles the confines of panel-size or number very well especially when considering the amount of action the writing team has thrown at her in these twenty-two pages.

Nowak has done consistently sweet work in this arc and Lumberjanes #12 is a good looking issue.

Lumberjanes #12 is a busy finale to this most recent arc that at time feels rush, but retains enough of the charm of the series that fans will certainly enjoy it.

Lumberjanes #12 finishes up this arc and there is a lot going on. It looks really cute and there are merit badges.