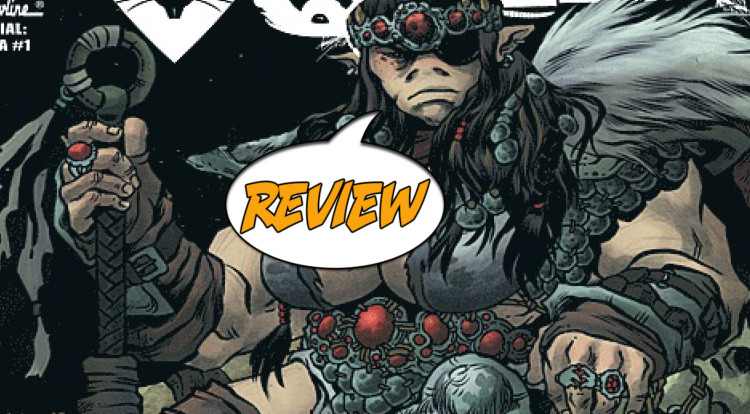 Rat Queens Special: Braga #1 delves into the life of a minor orc character from the regular Rat Queens series and reveals some surprising sensitivity in this character. Kurtis J. Wiebe deserves a lot of credit. He is a male writer behind a female-centric book and he has a cast of characters made up of every shape, size and ethnicity that springs to mind when you take into consideration the fantasy setting. I wasn’t certain what to expect in Rat Queens Special: Braga #1. This issue focuses on the orcish lady reader will be familiar with from her appearances in past issues. However, Wiebe drops a pretty monumental revelation about Braga in this issue: Braga is a transgendered character.

How cool is that? In all my exposure with the fantasy genre (in comic books and other media), I can’t think of a transgendered character making this high time that one popped up.

Wiebe handles the revelation of Braga’s gender shift with great respect. The narrative device in Rat Queens Special: Braga #1 is a morning after conversation. One of the many Daves of the Rat Queens world has spent the night with Braga and over coffee they have a little getting-to-know-you-the-morning-after chat wherein Braga vaguely tells the story of her past. Luckily for readers, we get to see what actually happened.

Once upon a time, we learn, Braga the orc was Broog the orc crowned-prince. Ironically, Broog is quite a bit like a Disney princess (think Belle of Beauty and the Beast), highly intelligent and clearly destined for more than his culture is willing to offer. Rat Queens Special: Braga #1 establishes that in this world orcs meet the stereotypes: bloodlust, violence, limited cognitive abilities. Broog has taught his best friend Kiruk how to read and write, his plan for stepping into the role of chieftain centers around diplomacy and developing their society.

However, Broog’s father isn’t much interested in this progressive way of thinking and the drama builds throughout Rat Queens Special: Braga #1 when Vood (the younger brother), attempts to stage a political coup (which Vood mispronounces as he announces this move), and it is revealed that not only is this betrayal what leads Braga to ultimately abandon her family and her entire culture, but it also left her with the most noticeable disfigurement of her design.

The coolest thing about Rat Queens Special: Braga #1 is that in one timeline we have Broog and in another timeline we have Braga. It’s not addressed explicitly at any point, Braga’s status as a transgendered orc is a fact that readers are forced to accept if they want to make it to the end of the issue and get the full story.

Wiebe has written a truly compelling biography for a character I had limited interest in before and has made me want to read more and more about Braga and delve more deeply into her story. Rat Queens Special: Braga #1 is a really surprisingly great issue.

Tess Fowler steps into the art duties on Rat Queens Special: Braga #1 and she does a great job. Her style is grittier and harsher than Roc Upchurch who handles art on the Rat Queens series proper. The edge that Fowler brings to the issue really suits the often brutal nature of the subject matter.

Braga (or Broog, depending on the panel), towers over every other characters in the scene and it’s no wonder that she has a slough of battle victories under her belt. The harshness that Fowler brings to Braga’s appearance creates a compelling dichotomy with her intellect and sensitivity.

Despite the fact that Rat Queens Special: Braga #1 centers around orcs Fowler puts some real emotion onto the faces of both Braga and Kiruk in particular. This makes the circumstances of their parting all the more upsetting when it does happen.

Rat Queens Special: Braga #1 is probably the only one-shot we are going to get with this character and it was an outstanding one well-executed by everyone involved. I’d love to see more about this character and I bet you would too.

Rat Queens Special: Braga #1 focuses on a secondary character and brings some true humanity to her orcish roots. This issue is really, really moving.