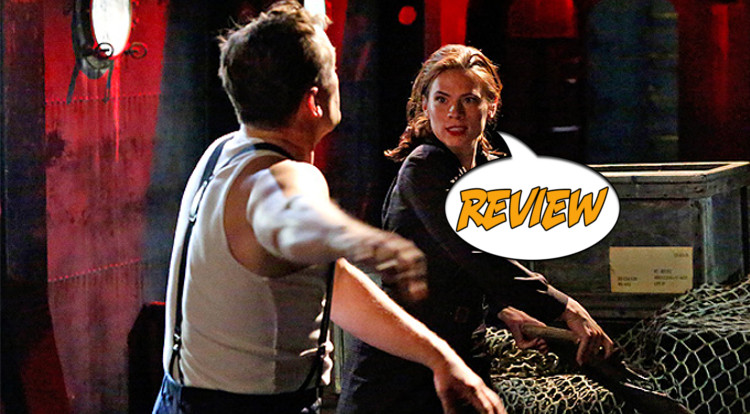 Agent Carter episode 1.3 Time and Tide deals a lot with the mysteries of Jarvis’ past, S.S.R. takes a loss and we gets hints at a nemesis. Previously on Agent Carter: Jarvis comes into his own as Peggy’s partner as they delve further into the mystery of who stole Howard Stark’s inventions?

The third episode in Agent Carter is called Time and Tide and the title is a touch cryptic in keeping with the overall themes of the episode. Writer Andi Bushell hits viewers with some of the heaviest subject matter that the show has addressed to date.

Pretty early on in Time and Tide Krzeminski (Kyle Bornheimr who easily gives the best performance of all the S.S.R. agents), Thompson (Chad Michael Murray who easily gives the worst performance of all the S.S.R. agents), and Sousa (Enver Gjokaj), led by Dooley (Shea Whigham), focus their investigation into the implosion of the Roxxon Factory on Edwin Jarvis (James D’Arcy). They come after the butler-turned-ally of Peggy Carter (Hayley Atwell), with enough fire that he is dragged down to their headquarters and interrogated.

James D’Arcy gives a superb performance, effortlessly acting circles around the American actors he shares scenes with during his S.S.R. interrogation. Writer Bushell drops the revelation that Jarvis was not only charged with treason, but dishonourably discharged from his military post. As far as tragic flaws go this is a pretty heavy one to levy against the character who has been established as the protagonist’s moral compass and closest confidante.

While Peggy does everything she can to free Jarvis – and risk incriminating herself at the same time – and despite the fact that she succeeds in removing Jarvis from the clutches of her ignorant co-workers it is almost impossible for her to leave him alone with his secrets. They have a lovely back-and-forth as they are co-investigating how Howard Stark’s inventions were transported off his estate where both Peggy and Jarvis have to come to a trust and understanding in order to not only preserve their working relationship, but their friendship as well. It is evident that neither is being completely honest with one another although examined and presented in a way that you can tell they need each other. Peggy is also in a unique position of – technically – committing treason herself in her work with Jarvis in order to clear Howard Stark’s name which provides her an interesting position on the entire situation.

The dramatic crux of Time and Tide come after Krzeminski and Sousa make a big discovery (with more than a little nudging in the right direction from Peggy and Jarvis wherein James D’Arcy does an outstandingly bad American dialect), and one of the male S.S.R. agents pays a dramatic price. The attacker (and that’s they only way I will refer to this character for the sake of spoilers), is garbed all in black and only seen from overhead and they are obviously a woman. Despite the fact that director Scott Winant does everything he can to disguise the fact you can tell in the way the attacker walks.

I’m going to make a prediction right here based on the footage of Time and Tide: the attacker is Angie, Peggy’s best friend (played by Lyndsy Fonseca).

Time and Tide concludes with the entire cast of characters examining where they stand in the wake of the episodes events and it’s a very somber closing. Overall, the episode is not as in-your-face awesome as the first two Agent Carter episodes were, but there are some outstanding moments – particularly from James D’Arcy as I mentioned several times above – and an important emotional impasse was navigated by Jarvis and Peggy while the potential nemesis of this first season gets some screen time.

Time and Tide is the most inter-personal episode of Agent Carter we have seen to date and that leads to some great acting moments. It is a solid hour of television and we’ll hopefully see some more plot in next week’s episode.

In "Time and Tide" parts of Jarvis' past gets revealed, Peggy must decide whether to trust him or not and an S.S.R. agent takes a hit. The episode is good, though not as strong as the first two.