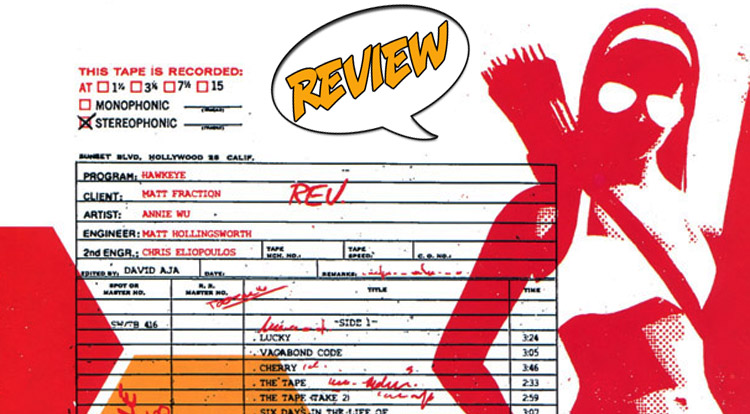 Kate Bishop has had a rough time of things lately, suffering a tough breakup with her alien boyfriend, and ditching New York for the warmer climates of Los Angeles.  Can she figure out how to be a detective and a hero in time to keep Madame Masque from raining vengeance down on her head?  Your Major Spoilers review of Hawkeye #16 awaits!

Previously in Hawkeye: Kate Bishop took over the role of Hawkeye when Clint Barton was lost and presumed dead.  Clint’s return has complicated both of their lives, tying both Hawkeyes together in the tawdry hurricane that is the life of Hawkeye, and people are starting to pay the price.  After a particularly difficult series of events, including the murder of one of their friends, the Hawkeyes parted company, with Kate losing her patience with Clint’s alternately hard-headed and short-sighted worldview, taking off to L.A. with Pizza Dog in tow.  Sadly, Madame Masque (who still holds a grudge against Kate for impersonating her as part of a sting operation) has once again targeted Bishop for revenge…

Just to clarify for those who are confused (I know I was), apparently David Aja’s work on Hawkeye #15 had been taking longer than expected, so Marvel editorial chose to get the apparently already-completed #16 out to stay on schedule, somehow.  Since #16 directly continues out of Kate’s solo turn in #14, though, things aren’t too hard to follow.  As the issue opens, we find Kate Bishop on her bicycle on the freeway, where she encounters a seemingly homeless person wandering through the passing lane.  Fraction does a really good job of keeping her character consistent with previous stories while dealing with her decisions since reaching L.A., as she discovers that her new friend is a former rock star (with some serious Beach Boys overtones) who may actually have a case for her as a P.I.  Kate’s investigation leads to some interesting character work, but for the first time I feel like the Hawkeye creative team may have overshot their mark a bit.  As the story unfolds, we find that her client isn’t as crazy as he seems, just a man whose urge to create has driven him to desperation, spending decades working in the studio to create the perfect concept album.

Kate’s investigation is nicely handled, and Fraction uses L.A. as a character, much as he uses Clint’s New York neighborhood as an important part of Clint’s chunk of story, but things get a bit ugly as she confronts the true villain behind the issue’s events.  As Kate is beaten down by a couple of rented thugs, we see just how close her Hawkeye career is the Clint Barton’s, and the story thankfully hangs a lampshade on the fact that we’re watching a teenage girl get beaten down by a couple of muscleheads (although the busts a nose AND a jaw in return for her beating.)  The issue ends with a not-so-shocking revelation, and a semi-happy ending for Will Bryson, but also a cameo by Madame Masque, who simply slinks up behind Kate and murmurs “Found you” in her ear before disappearing into a crowd, making for a truly unnerving and creepy moment that makes me worry for Lady Hawkguy’s safety on the West Coast.

THE BOTTOM LINE: “I GOTTA GET OUT OF LOS ANGELES…”

All in all, this issue somehow doesn’t feel quite as self-assured as some previous issues of this book have, though the reappearance of the Eliot Gould-type detective is cute, and the shot at Marvel’s most unlikely seventies super-team was pretty funny.  Part of my discomfort is probably the amount of time it’s been since we’ve seen Clint, Barney and the rest of the cast back in NY (something that wouldn’t have happened, if not for the production issues) and Kate’s fish-out-of-water situation feels a little forced this time around.  Still, even a not-as-great issue of this title is a better than average affair, and Kate’s adventures in wonderland are still engaging, with Hawkeye #16 earning a better-than-average 3.5 out of 5 stars overall.