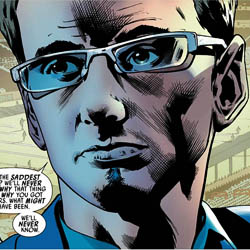 Or – “Battle Of The Network Star-Spangled Kids!”

What happens when you mix American Idol with Rising Stars by way of Battle Royale?  It’s interesting, I’ll give ya that…

Previously, in America’s Got Powers:  Jonathan Ross is a well-known presenter and television personality in Great Britain, and is married to a super-hot lady also, so well-done there.  Bryan Hitch is a well-regarded artist known for his work on The Ultimates, and is roughly 60% of why that book was super-awesome.  Together, they will play the greatest hits of Lionel Ritchie through a kazoo with their noses…  Or not, whichever.

YES, THAT GUY TOTALLY LOOKS LIKE THE TENTH DOCTOR.

The issue opens with a quick three-page launching point, told in the first-person, about the arrival of a strange meteor 16 years ago that caused every pregnant woman in the San Francisco Bay area to simultaneously give birth to perfectly healthy super-powered children.  Jumping forward, we see the super-chilluns fighting to the death in a televised battle of powers, with the winner graduating to the world’s only official super-team.  In the first fifteen pages, I have flashbacks to “The Running Man,” Todd Nauck’s “Wildguard”, “Rising Stars” and a strong visual parallel to Hitch’s “Ultimates” work.  The twist comes in that the whole thing is actually set up to be a front to fund further study of the super-kids and their powers, masterminded by Professor Syell (clearly modeled on David Tennant.)  The first issue really books it’s way through the salient points, giving us a protagonist, a ton of backstory and a major conflict in the first half of the issue, as well as explaining that the central character of our book is the ONLY child born of the star-stone not to develop super-powers.

FIGHT FOR YOUR RIGHT TO… SURVIVE, APPARENTLY.

Having been backstage at many, many television programs and the occasional wrestling show, the most authentic part of the issue comes as we see what happens before the show and behind the scenes at “America’s Got Powers,” following our zero-power player in his duties selling souvenirs and running about in a mascot’s costume.  The second half of the issue plays well, if a bit familiar, as the call to adventure goes horribly wrong, and young powerless Tommy is revealed to be more than he seems, all to save the life of an innocent young boy who gets too close to the super-powered action.  The familiarity of the story beats works both for and against the book, especially when paired with Hitch’s fairly specific art-style.  I found myself feeling good that I knew what was coming, but a bit annoyed at how straightforward all the tropes being played are.  I got another sense of deja vu, as the “graduated” hero team is as loathsome, venal and unpleasant as any of the various bastards-in-capes featured in “Powers,” but the creators still managed to stick the landing.

THE VERDICT:  AN INTERESTING START…

All in all, there’s nothing wrong with familiar, especially in television (where one of our primary storytellers made his name) and all the various elements play seamlessly as a well-oiled book.  For any complications that come from Hitch’s previous work, the action sequences are smooth and dynamic, and the overall effect from reading this title is very pleasant.  America’s Got Powers #1 is a true elevator pitch (“It’s like The Hunger Games meets Heroes!”), but hybridizes well enough, and puts all the various elements together with skill, earning 3.5 out of 5 stars overall.  I think this title has the potential to transcend the sum of it’s parts, and I, for one, hope that it does…