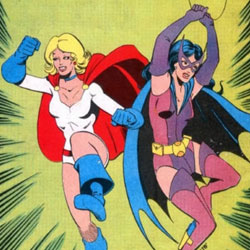 If you don’t read USA Today (hey, I can’t blame you), then you missed out on some of the big stories coming in the DCnU in 2012. Want more stories from Earth 2? DC has you covered.

We know that James Robinson and Nicola Scott are bringing back the Justice Society, but now it looks like Power Girl and Huntress are getting their own title in May 2012 called World’s Finest. The series will be written by Paul Levitz with George Perez and Kevin Maquire rotating on the art duties.

“What does that mean to be exiles from that Earth 2?” [Bob] Harras says. “We thought it’d be a nice thing to bring this concept back and to really, as we did with the 52 initially, reconceive it and freshen it up.”

I really like that DC is finally getting around to doing something with their 52 Earths that were brought back following the 52 series.  Seems like there are a lot of opportunities (i.e. Ultimate DC) to have both new and old continuity characters playing for fans.

So does this mean DC is expanding their New 52? Not quite, six new books are coming, which means six will be ending with issue eight. The titles are Men of War, Mister Terrific, O.M.A.C., Hawk and Dove, Blackhawks, and Static Shock. Bob Harras did tell USA Today that just because the series are ending, doesn’t mean the characters are gone.