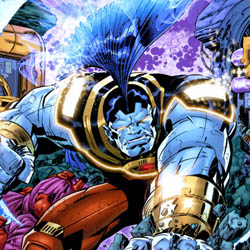 I’ll say this for the relaunch:  They’re certainly making an effort to bring back things from all across their 80 year history.  We’ve seen the thirties, the fifties, the sixties and the eighties represent, but now it’s time for a little 1970’s Kirby love.  Which, now that I mention it, sounds particularly disturbing and awful…  Bygones.  Let’s see what’s happened to the One Man Army Corps from the far-flung world that’s coming! Previously, on O.M.A.C.:  In the world that’s coming, a sentient satellite known only as Brother Eye chooses milquetoasty errand boy Buddy Blank to become his newest weapon: The One Man Army Corps known as O.M.A.C.  It’s a strange dystopian future, wherein O.M.A.C. himself is often unsure of the difference between right and wrong, and everyone has really angular features and square fingers.  30 years later, but somehow in the past, Batman creates a satellite called Brother I which turns hundreds of thousands of reg’lar fellers into O.M.A.C.’s of his own, plunging the DC Universe into chaos in yet another gambit to take down his super-powered fellows “if they time ever came.”  (For somebody with so much money, influence, prestige and respect, Batman has a real inferiority complex about super-powers, doesn’t he?)  Some, all or none of that may matter here, though, as we’re about to see a new O.M.A.C. take center stage!

I have to admit, this is a release that filled me with uncertainty.  O.M.A.C. himself is a fave-rave character, and I have found over the years that Keith Giffen knows how to craft himself a compelling can’t-miss story out of some pretty thin characters and stock situations.  But the presence of Dan Didio (cue the Hamster Dance) is unnerving, as I found both his contributions to Wednesday Comics and his run on ‘The Outsiders’ to be rather basic, drab comics.  The issue opens with a very Giffen moment, as a very Giffen short-haired female stalks down a hallway of Project Cadmus to give her boyfriend, the alliteratively-named Kevin Kho, what for…  only to find him missing in action.  Keith started his career as a Jack Kirby imitator (check out old issues of The Defenders if you don’t believe me) and he still has all the beats and chops down, taking a full-on tribute to the late King in the faces of the characters, the layout and even the design of the main character.  O.M.A.C. just suddenly bursts into the issue, throwing furniture and smashing through walls, and ironically looking more stereotypically Kirby-esque (thick limbed, square jawed and blocky) than the original character design.  A mysterious holographic woman in a bikini shows up, reminding me of Lila the artificial woman, and then we find out the REAL secret of Project Cadmus.

If you’ve paid attention to the solicits, Superboy (who, in the original continuity was a product of Cadmus labs, another Kirby continuity nod) has been reassigned to different group of mad scientists, something called Project: N.O.W.H.E.R.E.  The reason for that becomes clear here as we are (re)introduced to Mokkari, the evil mastermind behind Cadmus labs, and the purple-skinned satyr known as Dubbilex.  Fighty-fighty and smashy-smashy take up most of the rest of the issue, as Giffen and Didio fling more Kirby riffs at us with each panel, and O.M.A.C. shows himself to be little more than a pawn of Brother Eye.  It’s a lot of spectacle and a lot of bang, but there’s a decided lack of substance at this point in the game.  The issue ends with Brother Eye’s mission complete and O.M.A.C. transformed back into… Kevin Kho.  (Yeah, it’s not really a surprise, what with it being in the solicits and all, but I though I’d throw in some drama for anyone who missed Previews.)  The issue ends with Brother Eye telling Kevin that his life now belongs to Brother Eye.  “But first, call your girlfriend, she’s worried about you.”  Heh…

This is a likable comic book, and every page gave me another “Hey, it’s that guy/girl/concept/name/Jack Kirby detritus!” moment, which is good.  The problem that comes from that is actually twofold:  One, as even I myself have noted, the DC relaunch has been predicated on giving us something new and different, and this is basically old-school O.M.A.C. with a different mohawk.  Secondly, this issue is all BLAM! and not so much substance, giving us a little bit of characterization for Kevin’s girlfriend and a little bit for Brother Eye and covering everything else with a veneer of spectacle.  If O.M.A.C. is going to last in this new world, I know we’re going to need to see more that power blasts and Kirby dots.  Still, I have faith in Giffen, and at least the spectacle was well-drawn and faithful to Jack’s own 70’s style, and I believe that they have more up their sleeve than just visual tributes to the master.  O.M.A.C. #1 isn’t the strongest start, but there’s a lot of potential waiting in the wings, and a lot of Giffen in the art and story, leaving the book with 2.5 out of 5 stars overall.  It’s not the weakest New 52 release of the week, but there’s still quite a few storytelling opportunities here.

Faithful Spoilerite Question Of The Day:  This O.M.A.C. seems to draw visually from the ‘Infinite Crisis’ era retake on the character.  Why, if you have an awesome original core concept, would you keep going back and relaunching the second, inferior, derivative work?