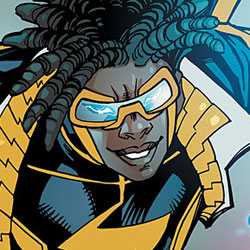 Virgil Hawkins is back, but relocated to New York City and off to a new adventure, along with other characters from the Milestone universe! Previously in Static Shock:  Static is teenager Virgil Ovid Hawkins, a brilliant young man who got involved with some gang warfare and dosed with Quantum Juice in an event known in Dakota as the “Big Bang,” causing him to gain powers and become a “Bang Baby.” Now he’s in New York, dealing with the standard pressures of being a teenager as well as being a super-hero!

STATIC’S BACK IN ACTION!

My first exposure to Static Shock, as I imagine was a lot of folks’, was the TV show that aired on Kids WB. Both my dad and I quickly fell in love with the wisecracking youth–me, because he used electricity to fly around on a garbage can lid, my dad probably because he reminded him of Spider-Man (dad was always a Marvel fan). DC never fully utilized the property once Milestone became defunct, but I am hoping we are now seeing the beginning of the rebirth of the rebirth of the cool.
Static has gotten some pretty serious upgrades; he is working with a guy named Hardware who can pull some major strings; I wasn’t familiar with the character, but a quick Wiki search indicates him as an integral character to the Milestone universe, being the star of the first Milestone comic. Now he has gotten Virgil a job and outfitted him with new tech, in what seems to be a sweet partnering. Static’s smarts aren’t overshadowed by Hardware’s genius either; the character’s knowledge of physics is written really well, again reminding me of Spider-Man’s intelligence when fighting crime.

I am curious to see what the plan is for a rogue’s gallery in Static Shock; in this issue we see a group of villains riding brightly colored hover-cycles that are reminiscent of Tron, but little motivation is revealed. I don’t know if the entire Dakota-verse has been upended and moved to New York or what exactly the relaunch plan is, but I would like to see some of the “bang babies” from the TV show in one form or another.

One thing my wife pointed out in this issue is that Virgil’s mother is alive; in the TV series she had died from being hit by a stray bullet in a riot, and while I don’t know if that was the case in the original comic series, given DC’s penchant for corporate synergy with screen properties and the bizarre fascination with motivating characters through death of their parents, it may be wise to keep an eye on Mrs. Hawkins.

A PLETHORA OF ART-STYLES

The art for this issue feels a lot like the art from Milestone’s Static: Rebirth of the Cool; it definitely has what I consider to be the Milestone feel to it (which, having only read brief smatterings of Milestone mostly limited to Static comics, may or may not be a correct judgment). It gives the comic a flavor that I think I like, and certainly sets it apart artistically from most other comics on the market. This diversity in artistic styles for the New 52 is something that I am really enjoying; from Men of War to Animal Man to Static to Justice League International, we are seeing a lot of different styles all under one roof. I haven’t quite decided whether I like the style of Static, but I think it works well for the title; hopefully casual readers who pick it up because they remember the TV show won’t be turned off by it, as it is entirely unlike the animation for the show. Static’s new costume is also a bit of a departure; the same basic design elements are there, but it is clearly better-funded. In an interesting reference, there is a flashback moment in which we see Static’s old costume, so apparently its existence is still canon.

BOTTOM LINE: STATIC’LL PUT A SHOCK TO YOUR SYSTEM (In a good way)

Overall I really enjoyed getting to see Static again; I liked his brief tenure in the Teen Titans, even if he was terribly underutilized, and hope his ongoing gets into a lot of hands. I would love for Virgil Hawkins to be DC’s Peter Parker, and I think moving to New York may be the right first step for that path. I give Static #1 four out of five stars.