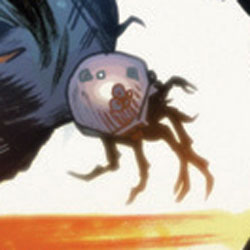 The turf war for New York is starting to heat up, as lines are drawn, sides are chosen, and vampires, aliens, and mobsters get ready to burn the city down. No, really… I mean, you’re not going to see that in this issue, but I’m pretty sure that is how it really went down. Previously in Turf: The peace between the New York City mob has been disrupted by the arrival of a really old gang from the old country. The new arrivals are really old school, some of them have been around for hundreds of years, and they like to put holes in people too. The only problem, these new arrivals like to drink the blood. Yep, Vampires have their eyes set on carving up the city, and eventually the rest of the world. In a weird twist, and alien spacecraft has crashed to Earth, and Eddie Falco, one of the local mob bosses, stumbles upon the wreckage, and the survivor inside.

WHAT WE REALLY NEED ARE GUNS. BIG GUNS.

I’ll say this for Turf, it is one weird and twisted mash-up of genres that fits together in a really weird way. Eddie Falco, badly wounded after a run in with the local cops on the take, wakes up in the wreckage of an alien spaceship. Parasites have healed his wounds and given him a new way to look at life, and the lone inhabitant has done the Vulcan Mind Meld trick with Falco, and the two now understand one another perfectly. Falco, none to pleased that the vampires are about to take over his city, convinces the alien that they can use the guns in the ship to fight off the baddies. If only they had a power supply. Readers are not made aware of what the power supply is, but apparently the duo can find what they need in Harlem. I don’t know what Ross has in store for us, but the set up is rather odd, and misleading.

Meanwhile, Gregori Dragonmir has been cast out by the rest of the vampire family. His brother Stefan has had him defanged, and chained outside to burn when the sun rises. Fortunately, daring reporter Susie Randall has escaped from her vampire captors, and helps Gregori escape.

This issue is full of blood letting, cop killing, vampire lore (again), and the comedic addition of an alien walking among men, dressed in a big fur coat. Turf continues to be an interesting tale, that has a unique way of presenting vampires fighting humans, but then twisting it with the addition of out space aliens. I like it for what it is, but the delay between issues really makes it difficult to remember who all the characters are, and what happened in the previous issue. While the addition of an alien is a surprise, it does work really well, though my suspension of disbelief was pushed too far when no one else in the city thinks it is odd to see an eight foot tall monster walking around in a big overcoat. I know that seems weird to complain about in a book that features aliens and vampires taking on the mob, but it is something that seemed off in how humans in the series interact with the strange things around them. But even with all the weirdness going on, Ross is able to give all the characters their own voice, and is even able to interject some humor between Falco and his alien partner.

Tommy Lee Edwards serves up some really nice panels in this issue, by bringing life to the undead, and making the alien seem a little more human. Edwards close up work is really spectacular and readers are really able to see what the characters are feeling, but the medium and wide shots are a complete mess thanks to the heavy inking. It’s nearly impossible to tell characters apart, and I think some of the more interesting action moments are lost, too.

I really wish I could say more positive things about the art, but when more than half the panels and pages feature long shots, and the long shots are where the trouble lies, then it doesn’t matter how great the close ups are.

One of the biggest problems with this series is the release schedule, which is absolutely killing the story and reader interest in my opinion. If readers don’t know it is coming out, and then forget when it is releasing, it makes it more difficult to remember to buy it when it does finally arrive. The writing by Ross is well done, and I like the mix of horror, humor, and crime drama. It’s just too bad Edwards art is trashed by heavy inks. Still, if you want to see what happens when an alien chomps down on a gangster’s head, or why a human would rescue a vampire, then Turf #3 is worth a read. Even with the problems, Turf continues to draw me in, earning 3 out of 5 Stars.