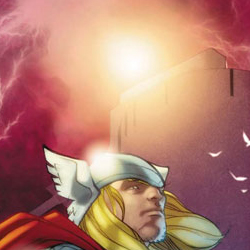 Thor #615 sees a new creative team begin work on the book, exploring the aftermath of the fall of Asgard. Whatever could be going on? Find out after the jump! The Old and the New

Our issue opens with a scientist – a quantum cosmologist, as he puts it – talking to an unseen Asgardian. His speech boils down to the idea that, now Asgard is in Midgard (our world), the plane of Asgard is a vacuum and this messes up a certain cosmic balance, which in turn is causing some sort of sinister force to manifest. Meanwhile, in the plane of Alfheim, the frivolous Ice Elves are massacred by an invading alien race who travel across spacetime. Meanwhile, Thor broods over Loki’s death and his brother, King Balder, broods over his failure to protect Asgard; they are interrupted when the clairvoyant Heimdall foresees their death.

This story has two main parts to it: the scientist’s predictions and the invasion of Alfheim (which appear to be connected), and Thor brooding over the ruins of Asgard. I’ll talk about the latter first because I want to get the negatives out of the way. I did not care for the Thor-at-Asgard sections so much, not because they are badly written – indeed, they are not – but because the material therein (Thor is sad about Loki, Balder is sad about failing to defend Asgard) has been dealt with already; Balder, especially, already went through feeling like a failure only to be talked around by Thor, yet that exact same scene plays out in this issue. The unfortunate fact is that this issue attempts to explore what is happening to some of our characters in the aftermath of Asgard’s fall after this has already been done, to some extent, in the previous three issues. I fear Fraction was caught in a conundrum: a first issue from a new creative team should aim to be accessible for newcomers (and no doubt, if one hadn’t read the previous issues, this entire sequence would be fresh and well-written), but that is difficult to do without going over old material. From an objective standpoint, I would say he made the right decision by putting in the Thor-at-Asgard sequence for the newcomers, but for me – and, I would imagine, most existing readers – it was a bit tiresome. Donald Blake also makes an appearance for about a page – existing in Thor’s mind. This was confusing for me as I, quite frankly, have no idea what’s going on with Blake in relation to Thor at the moment, and it would have been nice if that aspect of the universe had been explained.

The other part of the story appealed to me much more. I’m very much digging the whole, ‘Alien invaders from across time and space!’ plot, and am quite enjoying some science fiction in my Thor after the more mythical plot of the most recent ark. The writing is good throughout the entire issue: the characters all sound natural and, best of of all, the script is rather witty. Blake calls Thor out on being too moody, and the entire Ice Elves sequence (before the otherworldly invasion) is just self-parody enough to be funny without being ridiculous. The only peculiar thing, I found, was the last page, where it is revealed that the scientist is talking to the Asgardian Volstagg, who has been getting the scientist to repeat his theories over the course of the issue, using food as props, which Volstagg has then been eating. The issue thus ends on a joke, and I found this an odd note with which to finish, and it certainly doesn’t build up much suspense about this invading inter-dimensional force that we’re meant to be worried about. Overall, though, the script is well-written and the plot appealing, even if some parts of it may be old news for existing readers.

It’s all Good up to the Background

The art takes on a very pleasant style: not trying to be ‘realistic’ per se, but instead presenting art that is obviously ‘drawn’, as it were, but in a manner firmly grounded in reality (or at least what passes for reality in the Marvel universe). Of particular note is the whole Alfheim sequence, the art changes mood brilliantly pre and post-invasion, and Ferry does a great job of drawing both the Ice Elves and the invading alien race. The Asgardians are also drawn well, for the most part, although I would say that Sif’s (Thor’s girlfriend, apparently) costume looks strangely futuristic, rather than grounded in Norse myth. The colouring is all well-done and there is some great variation in colour throughout this book, always managing to make different places look distinct – from simply light rooms and dark rooms to different dimensions.

My only complaint about the art, in fact, comes from the backgrounds. A lot of the time they are simply swirls of colour or similar, and this really is detrimental to the book. The action can loose a lot of its effectiveness when the characters look like they’re standing in some ethereal plane, and images that I think are meant to be striking – such as Thor looking out on the ruins of Asgard – really don’t hit home when there’s nothing behind them.

The cover is boring. It is simply Thor standing in front of some buildings. Yawn. The title – nice and big, in a unique-looking font – is aesthetically pleasing to me, but otherwise there’s nothing to make this cover stand out. It bears no real relation to the events of the book, and frankly doesn’t seem to have had any thought put into it at all.

I wasn’t planning to keep getting Thor when the new creative team took over – I only bought this issue because it came out right before the book was due to come off my pull list. However, a mix of good, witty writing and pleasant art has really made me glad of the purchase, and I may well look out for the next issue. This is definitely a book to check out, whether you’re a new reader looking for a good read or an existing reader unsure about the new team, and it gets three and a half stars out of five.