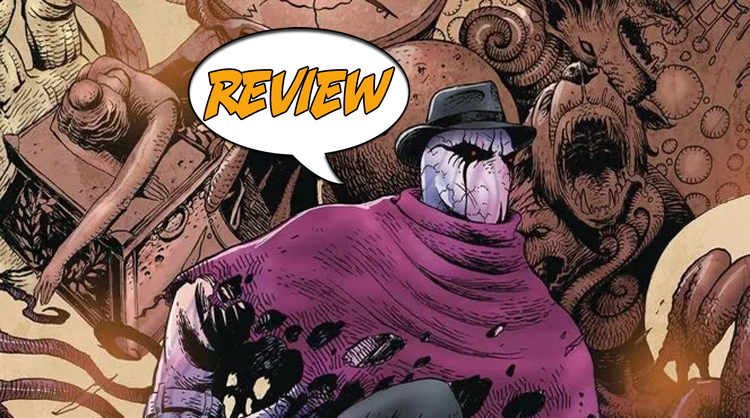 SOLICITATION: There is a forgotten paladin who protects us from our nightmares while we sleep. Without him, we may never wake up again. He is the Dream Master. His curse is to guard our unconscious bodies from an evil entity who wishes to enter our reality, collapsing it for all eternity.

A NIGHTMARE, AND IT’S REAL!

I don’t know about anyone else, but I get some freaky nightmares at times! Maybe it’s because I read a lot of comics and science fiction, but I have woke up suddenly, startled by something I dreamed! I’ve broken out in a sweat over it, too!

So, along comes Dream Master, a comic that explores the dream realm and says, literally, that a dream can be a nightmare and also be very real! Yikes!

We’re introduced to this strange world through the eyes of a young girl who finds herself in a landscape that is already terrifying enough, full of eyes and noses and fingertips, just to mention a few of the things she sees. But then she discovers a werewolf (or at least a wolf that can stand on its two back legs) is after her! She tries to run away, but she doesn’t seem to be able to lose this creature! She calls out for somebody to help her, then she hears the Dream Master say for her to “get down!”

Armed with a crossbow, the Dream Master takes on the threat, but it doesn’t go away very easily.

That’s when the girl says, “This must be a nightmare. But it feels so real.” The Dream Master responds, “It IS a nightmare… and it is very real.”

THAT scared me! I don’t want my nightmares to be real, and neither does this girl, I imagine! As I’m reading, I’m pulled into this crazy fantasy world completely, and it’s terrifying!

I’d like to say that the two companions, who continue to journey on, don’t run into any other trouble, but they do, and it’s nasty and angry! There is a solution to all this, and the Dream Master eventually resolves the situation, but it’s something a guy with acrophobia, a fear of heights, does NOT want to see happen!

This title is written by Jonathan Hedrick, who has scripted many Indie comics I’ve truly enjoyed, including zombie one-shots Freakshow Princess and Freakshow Knight, a sci-fi horror story called Quicksand, a superhero story called Capable, an all-ages tale called The Space Cadet, and a political thriller named The Recount. They’ve all been really good, and I’m impressed by the wide variety of storytelling Jonathan works in so easily.

This one just might be the creepiest and his best!

The pacing moves along at just the right tempo, slower when we need the suspense, yet faster when the terror ramps up.

I also enjoyed the fact that we don’t get a lot of explanation just who the various characters and yet we buy who they are and what is happening to them.

The dream environment we find ourselves in is weird and odd, including used pop cans, strange creatures, graveyards, and glowing liquids floating in the air or sitting in various holes. Busy place, I have to say, with all kinds of things you recognize and those you don’t. Yuck!

The Dream Master’s appearance is different as well, and he on some levels resembles DC’s The Question, with his hat and masked face. The glowing red eyes are frightening! I liked his tattered cloak/cape and the fact that he wears gloves (you need them to keep away the glowing liquids, I bet). And the creatures we see are mixtures of various monsters, which I found intriguing.

The facial expressions, largely on the young girl, are mostly those of terror and surprise. Since the Dream Master has a mask that doesn’t change, we need that in order to feel her response to the realm around her.

When something happens, it takes place quickly and brutally. That includes the wolf creature, just to name one. In horror, of course, things need to proceed slowly so we get to feel the danger! I thought that was nicely done!

BOTTOM LINE: A Horror of a Debut Issue!

I have to say that, even though I was scared by parts of this initial issue, I remain intrigued as to exactly what’s going on here! I want to know what’s going to happen next, so I’m looking forward to future issues!

I’m left with questions as well. Will we see the girl again? The wolf? Other creatures/things we run into in the background? Just what IS going on here? And just who is the Dream Master, anyway? Was he human previously? I have to know!

This is a perfect scary story for Halloween or even Christmas, where supernatural is the name of the game! Highly recommended! We’ll see how I sleep tonight, though!

I have to say that, even though I was scared by parts of this initial issue, I remain intrigued as to exactly what’s going on here!